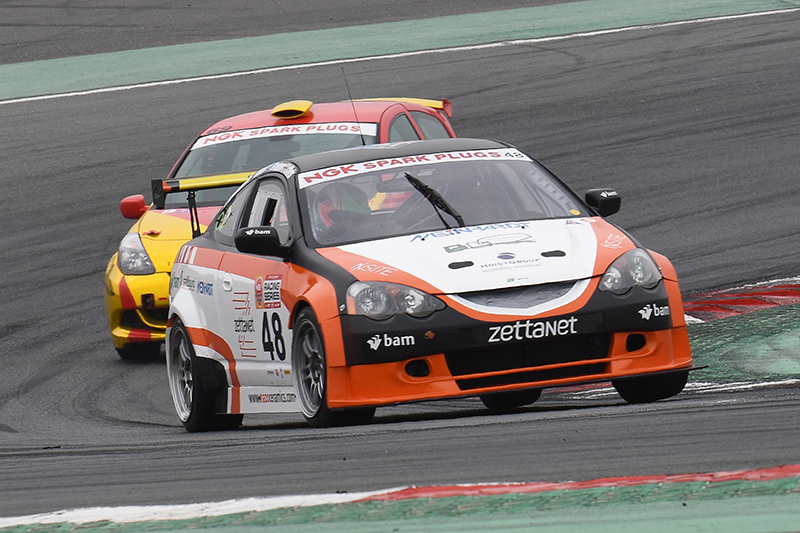 Saturday 4th March saw the running of the NGK 3hr Mini Endurance race at the Dubai Autodrome. The team decided to enter the race as it would enable them to test a few modifications that had been implemented on the car following the completion of the Dubai 24hr race in January.

Jonathan and Umair would share the driving duties, the strategy being handled by Ian and Richard and the car looked after by Sander, Jason, Phil, Adnan, Noel and Theo.

For warm-up new tyres were fitted with Jonathan driving in the session to assess the handling and to scrub in the new tyres.

For qualifying it was the turn of Umair to drive. 1 out lap followed by 2 progressively quicker resulted in pole position by nearly 1 second. With pole in the bag, Umair returned to the pits where the team carried out a practice pit-stop, car filled with fuel and then returned to the garage.

At 13:50 Umair headed out  onto the grid and took up his pole position space. With all of the cars on the grid, the grid was cleared with the safety car leading the cars round for 1 warm-up lap. With the safety car pulling into pit entry, Umair controlled the pace of the field and led the grid round the last turn. Lights off, lets go racing….

2 gentle laps to warm-up the tyres and then Umair was straight away down to the target 2:24-2:25 laps times, which resulted in Umair extending his lead by ~1 second per lap (all part of the plan of building a small lead to cover any pit stop eventualities). After 65 minutes he asked how long he to go in his stint as he had consumed all of his drinks bottle?  Luckily, it was planned for Umair to drive for 70 minutes so he only had to complete 2 more laps.

So pit-stop 1 was Umair out, Jonathan in and 2 new front tyres. With that done, Jonathan headed out onto the track to be greeted by spots of rain…. The rain soon stopped and Jonathan was soon back into the groove of repeated 2:25-2:26 laps. However, just before the end of Jonathans stint the rain returned harder and entering turn 15 the car stuttered. No problem as the pit entry is at the exit of turn 15, so into the pits Jonathan came.

Jonathan out, Umair in and down to the refueling area for 45L of petrol. The pit-stop left Umair with a 8 second lead and 43 minutes of racing to go. A gentle request from Ian for Umair to increase his pace slightly soon saw the lead extend by 1 second per lap.

With no further dramas (weather or fuel wise), Umair brought the car over the finish line 1st in class and 2nd overall (overall winner was a Lamborghini Huracan). Podium time.

So mission accomplished with lots of new data gathered and a few areas where car set-up could be improved. With that, the team would like to thank the Dubai Autodrome for organizing the event, the sponsors who made it possible for the team to compete and everybody who came to help and support them.

So until next time.