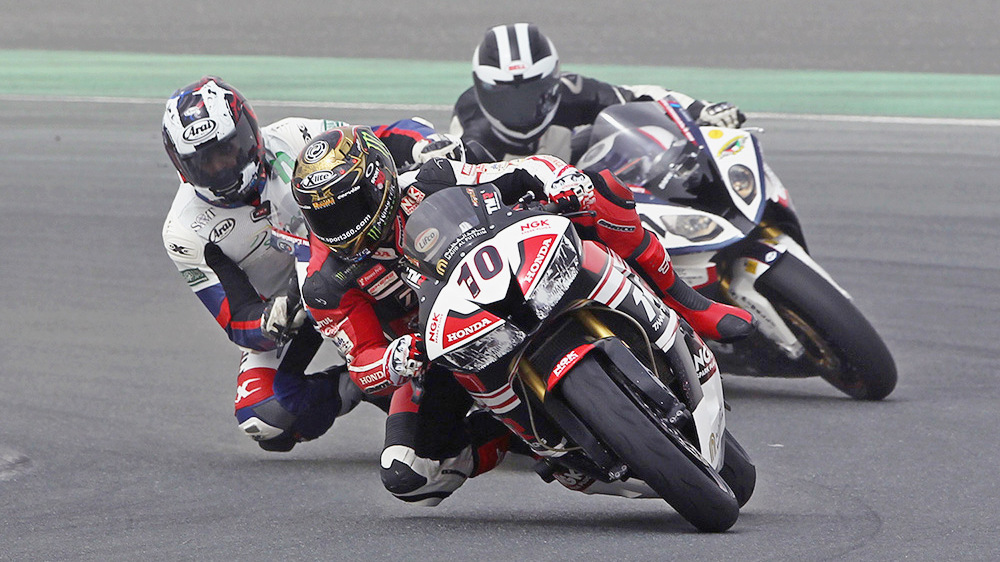 The Super Trofeo, a one-make series featuring exotic Lamborghini Huracáns, is already established in Europe, Asia and North America.  This weekend was the first appearance of the series in Dubai and 2017 marks the first year for the championship in the Middle East.

The new series was greeted with difficult windy conditions on the 4.29 kilometre International Circuit at Dubai Autodrome, but the weather was not enough to deter fifteen roaring Lamborghinis from lining up at the start grid on Friday.

The Austrian duo of Paul Scheuschner and Hendrik Still of Konrad Motorsport earned pole position after Still secured a best lap time of 1:36.766 in the first of two qualifying sessions.  However, it would be the second place team, GDL Racing, with drivers Axcil Jeffries and Rik Breukers, who would eventually control the contest.

The Konrad Motorsport Lamborghini led for most of Race One, but was eventually reeled in and overtaken by Dutchman Rik Breukers.  Breukers went on to take the chequered flag 7.047 seconds ahead of another GDL Racing car piloted by Andrew Haryanto of Indonesia.  Australian Richard Goddard, who took over from young German sensation Carrie Schreiner, secured third place for FFF Racing Team by ACM.

Breukers started Race Two taking the lead over Goddard, handing the car over during pit stops to his capable Zimbabwean teammate Jeffries, who powered home to a convincing victory, 13.219 seconds ahead of Haryanto, with Schreiner trailing in for third.

The two overall wins wrapped up maximum points in the Pro Class for Breukers and Jeffries.  Haryanto topped the Am Class, while Scheuschner and Still were best in Pro-Am.

GDL Racing’s Axcil Jeffries commented, “It is only going to be good for the region, obviously, to have such high profile championships coming here.  It’s great for the region and I hope to see it continue to grow.”

The top spot was short lived for the pole sitter, however, as Price jumped into the lead in Race One and then cruised on to victory 36.755 seconds in front of Kacirek.  Costas Papantonis of Mouhritsa Racing propelled his Seat Leon Super Copa in for third place.

Price and Kacirek split Class Three victories, while Papantonis topped Class One.  Sri Lankan Ashan Silva did well for his championship ambitions with a pair of Class Two wins, jumping to the top of the standings over his British rival Willie Morrison.

Morrison, however, still placed high enough over the weekend to maintain his lead in the Clio Cup sub-category over Alexandros Annivas of Mouhritsa Racing.

Ian Roberts in his Caterham and Noel Ebdon driving a Peugeot 206 Gti, each acquired Class Six honours, while Bill Martin was the standout in Class Five. Mahmoud Tannir tightened his grip on the 600cc Championship with a faultless display, topping qualifying early on and then taking two comfortable class victories.  With only four races to go, Tannir has 181 points total and a massive 63 point gap on his nearest rival, Ahmed Almuyini.

Magnus Mossberg, back in Dubai for the first time this season riding a Yahama R6, was best-of-the-rest of the 600cc riders, grabbing second place silverware in both races.  Nawaf Al Shuaibi and Nasir Syed each captured a third place finish.

Emirati Nasser Al Shaiba on his Yamaha R1 went two-for-two overall and in the 1000cc category, getting narrow wins over Fahad Al Gharbally on his BMW S1000RR. Polish driver Aleks Karkosik is now much closer to securing a GulfSport $20,000 scholarship, winning both races at Dubai Autodrome and putting him firmly in control of the championship.

Saudi Omar Gazzaz and Saeed Al Ali of the UAE both tried their best to chase down the championship leader under difficult track conditions, but Karkosik was simply unstoppable.