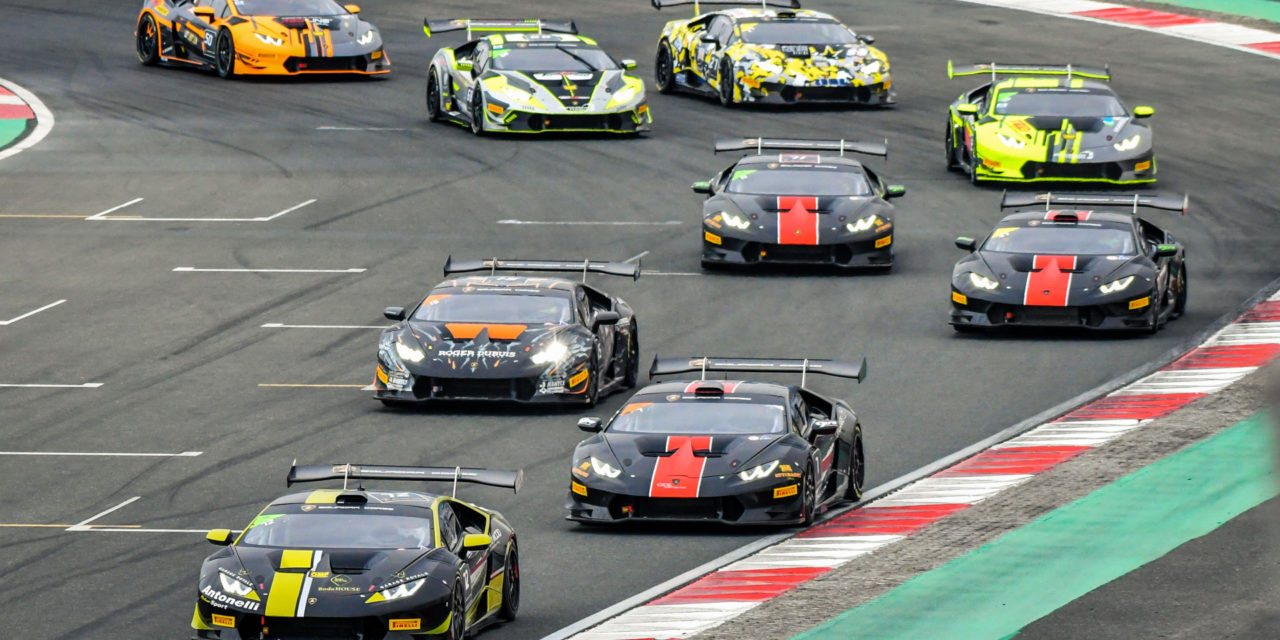 Dubai, February 18, 2017-They are constant and make no mistakes: Rik Breukers, 18-year-old Dutch member of the Lamborghini Young Drivers Program, and Axcil Jefferies, 22-year-old from Zimbabwe with experience in the GP2 Series, won Race 2 and are now the new leaders of the Lamborghini Super Trofeo Middle East in the PRO class.

The second race of the Middle East series for the Lamborghini Huracán Super Trofeos, held on Saturday, February 18 at the Dubai Autodrome, really started with all the prerequisites for an exciting fight for the top positions: Marco Antonelli started from the pole position and behind him was Rik Breukers. But in the first lap, there was a plot twist: the track, whose conditions were tricky because of the rain fallen before the start, misled Antonelli, who ran off track, ending up immediately out of the race. This gave the opportunity to the duo of the car # 7 of GDL Racing, Breukers and Jefferies, to manage the entire race and score another victory, after that conquered in Race 1 the previous day. In the PRO class, Breukers and Jefferies are now leading the standings, but they are only one point ahead of the Huracán # 15 of FFF Racing by ACM, driven by the young German female driver Carrie Schreiner and the American Richard Goddard: in Race 2, they repeated the result of Race 1, thus getting a third place overall and second class place.

Also the PRO-AM category sees a new duo leading the standings: Hendrik Still and Paul Scheuschner, behind the wheel of the # 26 of Konrad Motorsport, who scored two first places in his category over the weekend. In Race 2, the PRO-AM podium was conquered by the duo formed by Steven Liquorish and George Richardson (# 47 GDL Racing), while Costantino Bertuzzi and Nigel Farmer finished in third position and they are now second in the standings thanks to an excellent performance in the first round at Abu Dhabi.

Since Antonelli and Roda earned no points during the race, the AM class has now a new leader: Andrew Haryanto (# 71 GDL Racing), who had an really amazing weekend: two second places overall and two first places in the AM class, thanks to a continuous improvement of his performance, session after session. The duo of the team GT3 Poland formed by Teodor Myszkowski and Andrej Lewandowski also achieved excellent results: besides the second place in the AM class, they also obtained a fourth place overall.

In the Lamborghini Cup class, Gabriele Murroni scored another success with the Huracán # 88 of Petri Corse. The Italian driver, at his first racing experience, the Italian driver has made a continuous improvement during the weekend.

Rik Breukers – GDL Racing #7 (first overall and first in the PRO class): “The track conditions at the start were rather tricky. Initially, I thought I’d push and make some pressure to Antonelli, who then made a mistake. After that I tried to manage the race to leave the car in a good position to Axcil.”

Axcil Jefferies: – GDL Racing #7 (first overall and first in the PRO class): “Today’s race was tough, because during the driver change, we had a problem with the radio. This made us lose a bit of time and the first position. I managed to regain it and did my whole stint without any communication from the pits; but when I saw the checkered flag fall, it was a great satisfaction.”

Hendrik Still – Konrad Motorsport #26 (fifth overall, first in the PRO-AM class): “It was an unbelievable race, perhaps the most beautiful of my life. During my stint, I drove at qualifying pace, in fact I even set the fastest lap in the race and overtook six or seven times. I enjoyed the race and  am very satisfied. ”

Paul Scheuschner – Konrad Motorsport #26 (fifth overall, first in the PRO-AM class): “At the start of the race I struggled a bit to find the rhythm, because the track conditions were quite variable. Then, I tried to do my best and Hendrik did the rest with an outstanding stint. ”

Andrew Haryanto – GDL Racing #71 (second overall, first in the AM class): “It’s more than I had expected, it has been an extraordinary weekend. Today I got more and more familiar with the track and the car and pushed really hard. Especially in the second half of the race, when I saw that I could get the second place and managed to overtake the car in front of me.”

Gabriele Murroni – Petri Corse #88 (first in the Lamborghini Cup class): “At the start, it was not going very well, I couldn’t find the right rhythm. But in the second half of the race, when I found myself fighting against other cars, I “turned on” and enjoyed it a lot.” After last week’s victory in Race 2 at the Yas Marina Circuit, Abu Dhabi, the two young PRO drivers, Rik Breukers and Axcil Jefferies, triumphed again in Dubai, during the second round of the Lamborghini Super Trofeo Middle East.

At the start of Race 1, the lead was in the hands of Hendrik Still (# 26 Konrad Motorsport), who started in first position, thanks to the pole conquered in the qualifying sessions. During the first stint, the German driver managed to skillfully keep Axcil Jefferies (# 7 GDL Racing) under control, thanks to a fast pace (best race lap, 1’37″377), although his advantage gained in the first laps was reduced when the safety car was released, because of a stopped car on track.

The pit-stop for the driver change, however, was decisive for a change of the top of the standings: Rik Breukers, member of the Young Drivers Program of Lamborghini Squadra Corse, took over the wheel in car # 7 of GDL Racing from Jefferies and at the earliest opportunity, he managed to overtake the Huracán Super Trofeo # 26 of Konrad Motorsport, which had meanwhile passed into the hands of Paul Scheuschner, who was relegated to the fourth place, to the benefit of Andrew Haryanto (# 71 GDL Racing) and the duo formed by Carrie Schreiner and Richard Goddard on the Huracán # 15 of the team FFF Racing.

At few laps from the end, though, the victory of Breukers was put at risk by a ten-second penalty inflicted on the young Dutch driver for a track limit infringement. The big advantage gained by Breukers over his direct pursuers, however, allowed him to finish in the lead with more than seven seconds ahead of his opponents, thus winning Race 1. Thanks to this victory,  Rik Breukers and Axcil Jefferies reduced the gap in the PRO driver standings. In this category, it is also worth mentioning the excellent performance of the car # 5 of the team FFF Racing, with the nineteen-year-old German Carrie Schreiner and the American Richard Goddard, who got the third place overall as well as the second class place and are now the new PRO leaders.

The PRO-AM class saw the triumph of the duo of Konrad Motorsport formed by Hendrik Still and Paul Scheuschner, best in class although they finished in fourth place overall after leading the first half of the race. The second position of the category is occupied by another Huracán of GDL Racing, the # 47 driven by Steven Liquorish and the new entry of the series, George Richardson. The third place  (eighth overall) was conquered by Bertuzzi and Farmer (# 26 GDL Racing), authors of a great performance during the first round at the Yas Marina Circuit.

Andrew Haryanto (# 71 GDL Racing), with a second place overall and a considerable improvement during the various driving sessions, also won in the AM class, ahead of the drivers of the team GT3 Poland, Myszkowski-Lewandowski and  the driver of ARC Bratislava, Miro Konopka.

Nothing to do for the leaders of the AM class, Marco Antonelli and Davide Roda, tenth overall and fourth in class. In the Lamborghini Cup class, the highest step of the podium was conquered again by the rookie Gabriele Murroni, Petri Corse.

Rik Breukers – GDL Racing # 7 (first overall and first in the PRO class): “I am very happy, with this victory we have reduced the gap in the standings. I always tried to push hard, especially after the 10-second penalty, which forced me to earn as much time as possible over the second car. ”

Axcil Jefferies: –  GDL Racing # 7 (first overall and first in the PRO class): “I believe we have adopted the right strategy and in fact this has paid off with a win. The plan was to stay behind Hendrik Still until the driver change, so during my stint I only had to manage the race and preserve the tires. Rik did the rest with a great second part of the race.”

Hendrik Still – Konrad Motorsport # 26 (fourth overall, first in the PRO-AM class): “We started from pole position thanks to a good qualifying result and I tried to manage the first part of the race at my best, even if the safety car did not help me to gain time over the cars behind me. Paul then did a good job by managing well his stint.”

Paul Scheuschner – Konrad Motorsport #  26 (fourth overall, first in the PRO-AM class): “The race strategy was good and Hendrik did a superb stint. I’m happy with the result, because this was my second race in the Super Trofeo; I think the Huracán is an excellent and enjoyable car and even faster than a GT3. ”

Andrew Haryanto – GDL Racing #  71 (second overall, first AM class): “I’m really happy, this is the first time I have got an overall podium! I only focused on my driving and keeping out of trouble. I improved myself so much during free practice and qualifying and in the race, I did nothing but bring together the best sectors of the track, in order to keep a pace that would allow me to remain among the first cars. ”

Gabriele Murroni – Petri Corse #  88 (first in Lamborghini Cup class): “My second race ever went better than the first one at Abu Dhabi. It was physically less demanding and I’m feeling more and more confident with the car. We are now speaking the same language!”

The third and final round of the Lamborghini Super Trofeo Middle East will take place on March 2-4 at the Dubai Autodrome, with the GP layout (5.390 m), instead of the International Track (4.290 m).