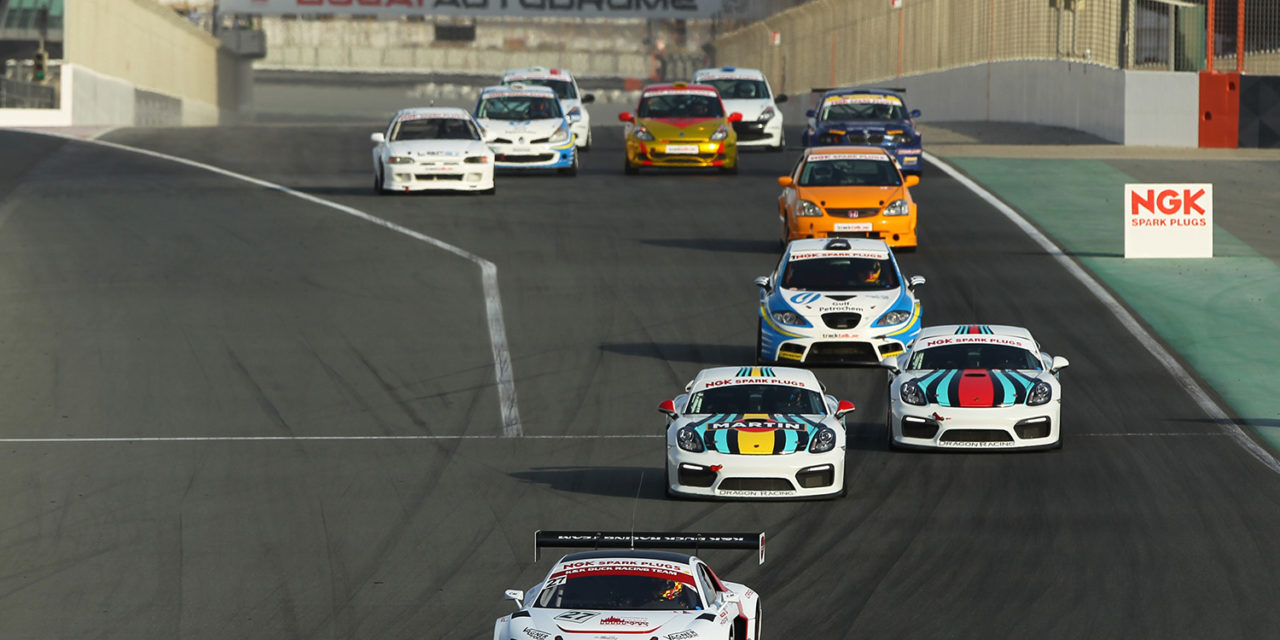 The new formula series, certified by the FIA and supported by the ATCUAE, has added new drivers and continues to gain momentum in the local motorsport scene.

Aberdein then went on to clinch two out of three races, solidifying his command of the championship.  Despite a thrilling Race Three contest with Aberdein, Sargeant finished the event with just two podium finishes, while Babington managed to reach the podium once during the weekend.

Having found great pace on the Dubai Autodrome International Circuit Aberdein remarked, “I really like driving here in Dubai.  It’s an awesome track and an awesome place.”

Dutchman Charlie Frijns of team Frijns Structural Steel ME and Irishman Ryan Cullen were level on championship points coming to Dubai, with British driver Tom Oliphant sitting in third but also in the hunt.

Dylan Pereira of Luxembourg beat all of the top three drivers in Friday qualifying but failed to make pole position count in Race One, dropping down to fourth as Ryan Cullen jumped from second on the grid to take the lead and then held on for the win.

It was a ferocious contest that witnessed almost half of the field, seven cars, not making it to the finish line, including Frijns and Oliphant.  Rookie driver Al Faisal AL Zubair survived the scuffle to snag second and Bandar Alesayi claimed third.

Charlie Frijns looked to bounce back on Saturday by starting on pole for Race Two, but he dropped to fourth on the opening lap, allowing Ryan Cullen to again take control.  Frijns worked his way back up and challenged Cullen for the frontrunner position but ran out of time at the chequered flag.  Cullen bagged his second win in a row, while Frijns settled for the next step down on the podium, followed by Tom Oliphant in third.

Saturday’s race podium was much different, with Kusin powering home for the win and Costas Papantonis in his Mouhritsa Racing Seat Leon Super Copa trailing in for second.  Dragon Racing’s Chris Frogatt claimed third in a Porsche GT4 Clubsport.

In the class standings Papantonis cleaned up in Class One, going two for two over the weekend.   Spencer Vanderpal in his Honda EP3 had to settle for a pair of second place finishes.

Papantonis, the reigning Class One champ, is determined to push until the final race in March.  The Greek said, “We are shooting for the championship again.”

Despite a poor qualifying session on Friday, Will Morrison was also a double race winner in Class Two Clio Cup.  The mid-field contest was scrappy on both days, with Morrison and Mouhritsa Racing’s Alexandros Annivas going side by side through corners. Annivas put up a great fight but was consigned to second place in both races.

Morrison said, “As we saw today, when it’s tight racing it’s good fun.  It’s good to watch and also exciting to be in the cars.”

Some brilliant track action ensued between the young pilots driving FG1000 formula race cars.  Polish driver and championship leader Alex Karkosik has been a dominant force this season and he made his intentions clear by securing pole position in qualifying on Friday.

When racing commenced, Saudi Omar Gazzaz got the jump on Karkosik, briefly taking to the front.  Alex snagged the lead back and the two drivers fought it out.  With three laps remaining, Gazzaz passed Karkosik again but this time held on for victory.  It was the first race win of the season for Omar Gazzaz.

Alex was quick to respond in Race Two on Saturday, taking pole position and then driving to a commanding lead, beating Gazzaz to the chequered flag by 3.929 seconds.

Gazzaz was happy to get at least one win over his respected rival, remarking, “He (Karkosik) is really good.  This is a good benchmark to have.”

The two drivers fought it out on Friday with Hjerppe taking victory by just 1.862 seconds over Shalunov, with Konstantin Gugkaev of AUH Motorsports taking third.

Saturday started out as another brawl, but this time Hjerppe’s Radical SR3 broke free and opened up a gap on the field, winning Race Two by a comfortable 12.195 seconds over Shalunov, followed by Timur Boguslavskiy of AUH Motorsports.

Top honours for the sportbikes were challenged between Mahmoud Tannir, riding a Honda CBR600RR, and Nasser Al Shaiba on his 1000cc Yamaha R1.

Al Shaiba had great starts and got the edge in both contests, winning two out of two races.  Tannir will not be worried about the pair of second place finishes though, as he still tops the 600 Class, which is championship eligible.