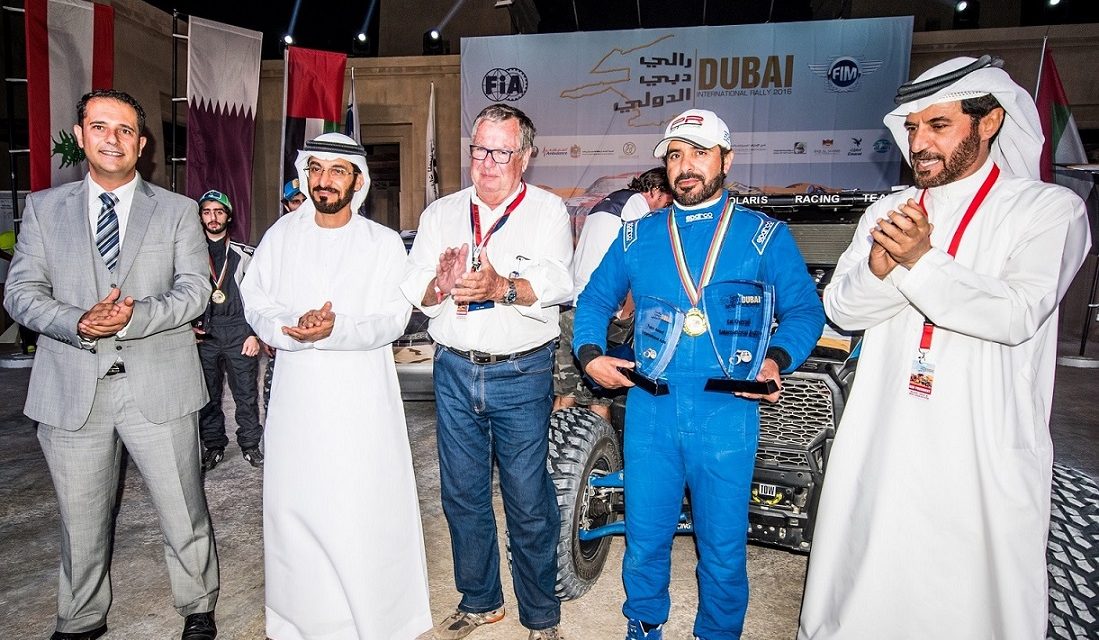 Dubai, United Arab Emirates, 9th December 2016-Local favourite Ahmed Al Maqoodi drew on his desert experience to take international category  honours in the Dubai International Rally, which took place over more than 200 kilometres of grueling dunes in and beyond the Al Qudra area of Dubai. By the end of the two stages of racing, driving a Polaris RZR 1000 Al Maqoodi took a lead of more than 35 minutes from Emirati Atif Al Zarouni in his Rage Comet buggy, who in turn finished ahead of Michel Fadel, also driving a Polaris RZR 1000.

Behind them, Britain Tom Bell was victorious in the T1.1 category (cars) in his Bowler EXR, 25 minutes ahead of Ahmed Al Shuhail and an hour in front of experienced U.A.E. Desert Challenge competitor Emil Khneisser, both in Nissan Patrols.

In 7th place were husband and wife team Ian and Sheila Barker in their Nissan Patrol, whilst Georgy Gomshiashvili came home in 8th position (Predator X18S)

In the National Moto category, Northern Irish veteran of the U.A.E desert racing scene David McBride grasped victory by a nail biting four seconds on his KTM 450RR from Emirati Mohammed Al Balooshi (KTM SXF 450) and two and a half minutes ahead of Khaled Al Falasi, making it a clean sweep for Yamaha with his YZ 480.

Sheikh Khalid bin Faisal Al Qassimi was disappointed not to start Dubai International Rally due to a technical problem which developed within his car shortly before the race. Sheikh Khalid will now focus on his training and vehicle development for the Dakar Rally. Al Qassimi and Abu Dhabi Racing wished the best of luck and a safe race to the ATC-UAE and all competitors.

The event was under assessment as a candidate round for the FIA World Cup for Cross Country Rallies and a decision based on that assessment will be made soon.