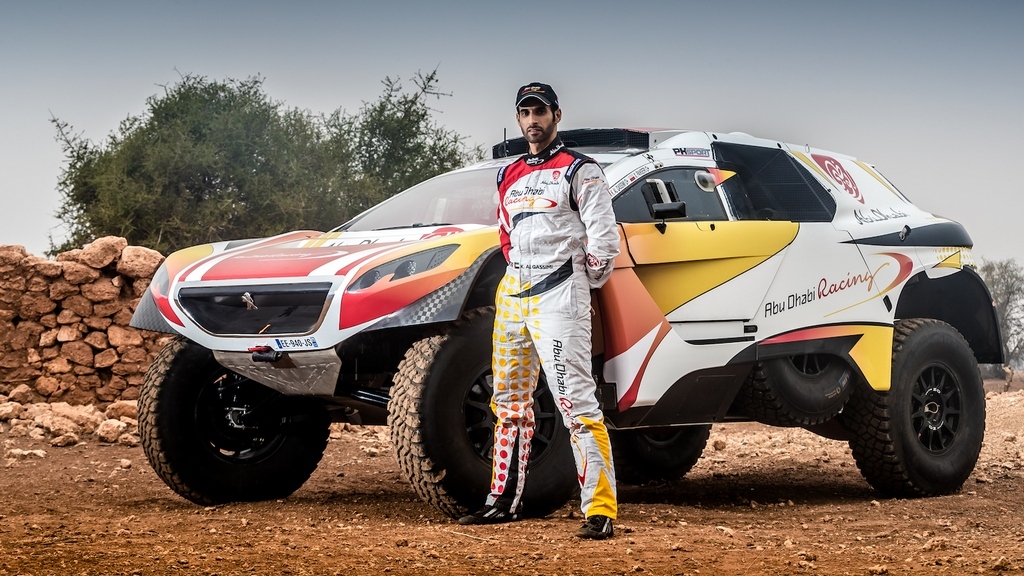 ABU DHABI (UAE), November 22, 2016 – Abu Dhabi Racing boss and driver Sheikh Khalid bin Faisal Al Qassimi will be taking the Emirates to a wider global audience when he competes in his very first of the world’s most notorious endurance cross-country endurance races, the Dakar Rally 2017, which will cross through three South American countries from January 2-14.

Sheikh Khalid will be behind the wheel of a Peugeot 2008 DKR as an official “Peugeot Sport” driver run by PH Sport.

The Peugeot 2008 DKR emerged a winner on its 2016 debut at the Dakar, with Stéphane Peterhansel behind the wheel and Jean-Paul Cottret as his co-driver. The 2008 DKR has been successfully tested by Al Qassimi last September ahead of his Rally Morocco cross-country participation the following month in October.

Sheikh Khalid said: “The idea of participating in the Dakar is not new. I’ve been thinking about it from a long time, it’s like a dream come true.

“I enjoyed my participation in past cross-country events like the Abu Dhabi Desert Challenge, Baja Aragon and Rally Morocco. Through these events I’ve learned a lot and I would like to challenge my limits once again; but this time on the toughest desert rally in the world. I’m so excited and very proud to carry the UAE flag at the Dakar and looking forward to the new challenge.

“Driving as an official Peugeot Sport driver run by PH Sport is definitely a very important step forward in my career. The support I will get from Peugeot Sport and PH Sport during the event will make me feel more confident which will push me to set new limits for myself at the Dakar.”

Run over approximately 9,000km, the world’s most famous and challenging endurance cross-country races, the event will pass through three South American countries – starting in Asuncion in Paraguay, a rest day in La Paz in Bolivia, and the finale in Buenos Aires in Argentina. The first six stages will run from January 2 to January 7 with a day’s much needed rest day on January 8 in La Paz in Bolivia, and a further six stages that will culminate in the Argentinean capital of Buenos Aires.

With the addition of Paraguay, the Dakar will visit the 29th country in its 39-year-old history, the 5th on the South American continent. Then the rally will head for its longest stay so far in Bolivia and more specifically the capital city of La Paz. Argentina, which has been a part of every edition since 2009, will be the theatre for the final battle decided in Buenos Aires.

Hundreds of competitors from several nations worldwide in the cars, bikes, quads and trucks categories will be competing for podium places in their respective classes.

Sheik Khalid bin Faisal Al Qassimi participated in the Abu Dhabi Desert Challenge in 2015 and was 3rd overall before being forced to retire due to a technical problem on the final day. In the same year, Sheikh Khalid participated in Baja Aragon in Spain and finished inside the Top 10 behind the wheel of a Toyota Hilux.

The adventure began in 1977. Thierry Sabine got lost on his motorcycle in the Libyan desert during the Abidjan-Nice rally.

“Rescued from the sands” in extremis, he returned to France defeated by these dream-like landscapes. He then promised himself that he would share this discovery with as many as possible and lived for a single goal: take a maximum number of people into the immensity of this sand.

When dreams become reality… On 26 December 1978, the Place du Trocadéro witnessed the first send-off of the Paris-Dakar rally. One hundred-seventy competitors had to cross 10,000 kilometers on the pistes of Algeria, Niger, Mali, Upper Volta and Senegal. The most newsworthy race of the late century was on! What made it unique was one particular characteristic: the contrast between a civilization and traditional villages with dried mud huts and the modern world.

Today, the Dakar Rally is unmatched and the most treacherous and challenging of endurance off-road challenges the world has ever witnessed.