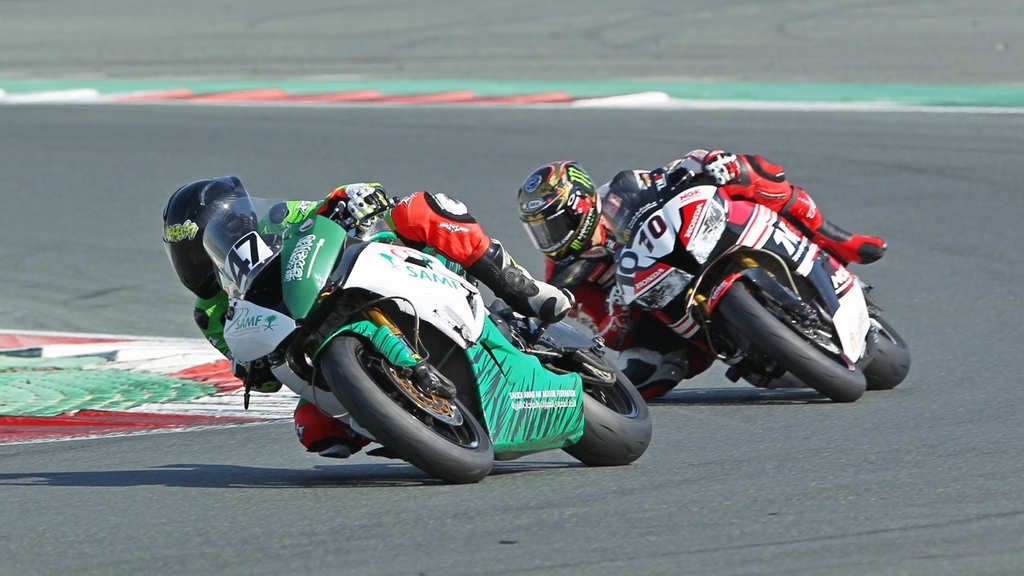 The first round of the NGK Racing Series at Yas Marina was dominated by Dragon Racing, but driving on the 3.56 kilometre National Circuit at Dubai Autodrome proved to be more challenging for the veteran team.

In Race One, Lean Price in his Dragon Racing Ferrari 488 GT3 got the jump on pole sitter Wee Liam Keong behind the wheel of a GDL Racing Lamborghini Huracan.  Keong didn’t stay in second place for long though and within a few laps he managed to regain the lead and hold on to it until the end of the race.  He crossed the finish line 11.132 seconds ahead of Price, who was 13.486 seconds ahead of Petr Kacirek driving an immaculate Audi R8 LMS Ultra.

Wee Liam Keong analysed his race, made some adjustments and was even better in Race Two, dominating from start to finish and clearing the rest of the field by a comfortable gap of 1:06.047.  Petr Kacirek was the best of the rest, followed by Costas Papantonis in his Mouhritsa Racing Seat Leon Super Copa.

Wee Liam Keong was happy to finish the weekend with two Class Three victories.  Afterward he reflected, “We were a bit lacking at the start so we looked through the data, watched some video, spoke with the team and managed to find a bit of pace.  We’re happy with the result.”

Dragon Racing didn’t get the Class Three wins but they did secure Class Four with Tani Hanna and his Ferrari 458 Challenge and Class Five with Bill Martin driving a Porsche GT4 Clubsport.

The most intense racing was in the hectic Class Two category.  In his Honda Integra, Ashan Silva emerged from the scuffle to come out on top in both races.  Will Morrison was the best of the Class Two Renault Clio Cup sub-category, taking home two first place trophies.

Reigning champion Costas Papantonis of Mouhritsa Racing reminded everyone that he is still the top racer in Class One.  He powered his Seat Leon Super Copa over the line for two class victories.

With last season’s champ Abdulaziz Bin Ladin out of the line-up for the weekend, the top step of the podium was open for takers.

Nasser Al Shaiba made his case during qualifying, nailing the best lap time of 1.32.671 on his 1000cc Yamaha R1, a full 1.111 seconds ahead of his nearest competitor Ahmed Almuyini, riding a 600cc Kawasaki ZX6R.

All that changed in Race One.  Al Shaiba started well with a clean getaway from pole, securing his lead over Almuyini and Mahmoud Tannir riding a Honda CBR600RR.  The top three riders broke away from the pack and slugged it out up front.

Halfway through the race Tannir leapfrogged both Almuyini and Al Shaiba to take the lead.  With two laps remaining Ahmed Almuyini then made his move to seize the frontrunner position over Mahmoud Tannir and Nasser Al Shaiba, who started to lag behind.

Almuyini managed to fend off any more challenges and made it to the chequered flag just .163 seconds ahead Tannir.  Al Shaiba had to settle for third.

In Race Two Nasser Al Shaiba got another good start and looked to vanquish the previous result.  However, it was Mahmoud Tannir who would again rise to the challenge and take the lead after three laps.  Al Shiaba threatened the frontrunner but could not reel him in.  Tannir stayed in front for the win, with Al Shiaba in second and Almuyini in third.

Afterward Mahmoud Tannir commented, “I have to thank the guys at Honda.  We rectified some things for Race Two with the tires and it really, really worked.  I was very comfortable with the bike.”

Almuyini and Tannir both got important wins for the 600cc Class and the overall championship.  Nasser Al Shaiba was the clear victor in the non-championship 1000cc Class. The new series got its first look of the Dubai Autodrome tarmac and the championship began in earnest with the first points scoring races.

Jonathan performed well on Friday and was simply unstoppable on Saturday.  He took both races on the day and a haul of points for the weekend.  Sargeant gave chase each time but could not hunt Aberdein down.

Reigning champion Romain Lutter of Lucco Racing opened the defend of his title with a convincing win on Friday, powering his Radical SR3 from fourth on the grid to victory with an impressive gap of 23.584 seconds over Sergey Shalunov of Arloid Racing.  Dream Racing Dubai’s Jani Hjerppe finished third.

Friday belonged to Romain but Saturday would not be as kind to the Frenchman.  When the race commenced Lutter rocketed from third on the grid into lead and he looked to be on course for another victory.  However, Ollie Smith of AUH Motorsports gathered up the front-runner and soon took control of the contest.

After 45 minutes of racing Smith ended up with a comfortable win, 41.852 seconds ahead of Jani Hjerppe, while Romain Lutter trailed in for third place.

Omar Gazzaz made an early statement in Qualifying by snagging the best lap time of 1.21.973, just pipping out Alex Korkosik by .016 seconds.

The next NRD Power Weekend will take place on 9-10 December 2016 at Dubai Autodrome.  It will feature MRF 2000, Porsche GT3 Cup Middle East, the NGK Enduro, the UAE Sportbike Championship and the Formula Gulf Academy.