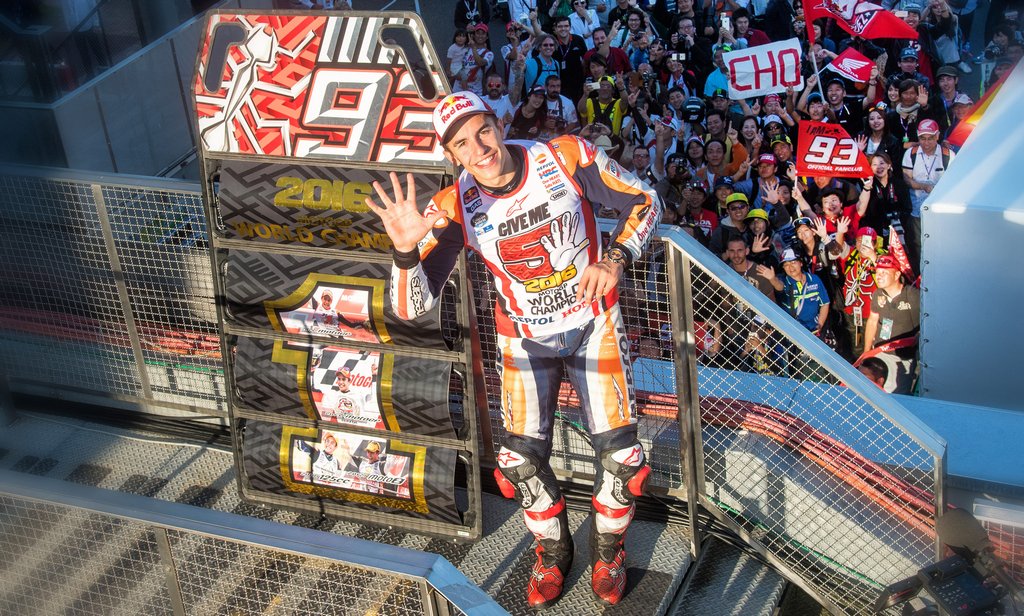 I read on my pit board that Lorenzo was also out; on that same lap, I made mistakes in four or five corners, as it was difficult to stay focused!

Oct 16th 2016 – Repsol Honda Team’s Marc Marquez has taken the 2016 MotoGP World Championship at the home of Honda – with the hand dealt by the Japanese venue seeing the cards fall perfectly for the Spaniard as Movistar Yamaha teammates Valentino Rossi and Jorge Lorenzo crashed out of contention. First was Rossi, into the gravel early – before Lorenzo’s ride through the pain barrier after a highside on Saturday was cut short; sliding out of P2 in the last few laps. Marquez, clear at the front, kept it on the road to take his third premier class title in four years, and his fifth victory of the year.

Marc Marquez – “It’s incredible! Before the race I didn’t expect to be Champion, and I said that here it would be impossible. However, when I saw that Rossi was out of the race, I decided to push hard for the victory. I was riding my hardest, and when there were three laps to go, I read on my pit board that Lorenzo was also out; on that same lap, I made mistakes in four or five corners, as it was difficult to stay focused! I’m very happy because this title is very special considering some of the crashes I had last year, and also because it came at Motegi, Honda’s home. Honda has worked so hard this year, and you could see the fruits of that effort also at this track, where we’ve struggled in the past. I myself also improved during the season; for instance, I learned how to better use the front Michelin tyre. It has been a demanding year, but a fantastic one. It’s great for my team, and of course I don’t want to forget my grandmother, who passed away this year and would be very happy with this World Championship. Now we can just enjoy it and go into the last three races with maybe a more ‘Marc Marquez’ style.”

With a slow start for polesitter Rossi, it was Championship leader Marquez who got the holeshot into Turn 1 – before reigning Champion Lorenzo quickly took the lead at Turn 2. With Rossi getting past Marquez soon after, Aleix Espargaro (Team Suzuki Ecstar) then took advantage to take the Italian legend. The rider from Tavullia fought back, before a duel between the Movistar Yamaha of Rossi and the Repsol Honda of Marquez saw the two switching positions in an early battle for honour.

Valentino Rossi – “First of all, I would like to say that I’m OK, fortunately no problems. On the other hand it’s a shame because I was quite strong and I had a good pace. Unfortunately my start was not fantastic and I lost a position to Marquez and Lorenzo. After that, Marquez was a bit faster than me to overtake Lorenzo, I lost a bit more time behind him, but the pace was good. I was able to push a lot to try and catch Marquez but unfortunately I lost the front. Sincerely, I felt nothing like going into the corner too wide or too deep, but I lost the front and logically I made a mistake.”

Jorge Lorenzo – “I’m very disappointed, because I made a mistake. I tried to push too much when the bike was not working well with the tyres. In Aragón we made a good decision with the tyres and this time it was the opposite. We chose the wrong front tyre, with the soft I think I would have made a better race, because my front tyre on the first laps was vibrating and closing. I didn’t have a good feeling, that’s why I couldn’t keep up with the pace of Marquez. Finally, because Dovizioso was coming, I pushed more than before in that corner and the front tyre didn’t give me any support or feedback and I crashed. It’s a pity, because I think we had the potential to fight for the victory with the right front tyre, but it was impossible today and we lost a great opportunity to be second in the championship. I want to congratulate Marquez because he didn’t have an advantage from his bike this year and he was the most consistent rider, so he deserves this championship.”

A crash for Eugene Laverty (Pull&Bear Aspar Team) then saw the Irishman out the race early on – his first DNF of the year – as the top three of Lorenzo, Marquez and Rossi held station at the front, and Motegi prepared the coming twists in the tale.

Rossi was first to fold, as the 9-time World Champion made a mistake and lost the front end of his Yamaha – leaving teammate Lorenzo as the last man standing in between Marquez and the crown. The status quo between the two remained, with Marquez in a clear lead, as battle raged behind.

Andrea Dovizioso – 2nd-“Today’s race was really very difficult. I started quite well but was boxed in by Valentino at the first corner and lost several positions and above all contact with the leading trio. I remained calm however and began to get closer to Lorenzo lap after lap: I didn’t want to take too many risks, but I had almost caught him when he made a small error and crashed out. I am very pleased with the feeling I had with the bike and with how I managed the situation: I couldn’t take too many risks because it was very easy to crash, but I was able to be constant throughout the race and with a good pace, and get an important result for both me and Ducati. This weekend we worked well, and confirmed that we have a good base on which to continue to work to improve several aspects of the bike.”

Maverick Viñales (Team Suzuki Ecstar) broke away from an early fight with LCR Honda’s Cal Crutchlow to get on the hunt back towards the podium, with teammate Espargaro falling back into his clutches as Andrea Dovizioso (Ducati Team) began to hunt down Lorenzo.

Maverick Viñales 3rd– “I’m very happy for this podium because it’s the result of two main points; first of all, the team managed to make good improvements since yesterday, delivering me a machine with which I felt more comfortable than yesterday. This means we have a lot of potential to express, still. Second thing, is that I managed to make a very wise race; the jump was not as good as I wanted, but then I decided to stay calm and not to waste the tyre in order to keep some performance for the end of the race. This allowed me to be consistent and keep my performance until the end and getting third. It was also a nice battle with Aleix, when finally I managed to overtake him it was too late to go and catch up for the second place, but this podium is very emotional, being here in front of all our fans and colleagues from the Suzuki factory.”

‘DesmoDovi’ made some inroads, with Lorenzo getting closer and closer, before an uncharacteristic error from the reigning World Champion saw him follow teammate Rossi in crashing out – a painful trip through the gravel after a highside in FP3 had left the Mallorcan bruised and riding through the pain barrier. Marquez pit board informed the number 93 of the unbelievable situation he now found himself in: a handful of laps, a third crown, and glory once again at the home of Honda. Dovizioso followed the new Champion over the line for a P2 finish, with Viñales completing the podium in another impressive ride – just pipping teammate Espargaro.

Cal Crutchlow came home in fifth as top Independent Team rider once again, with rival for that title, Monster Tech 3’s Pol Espargaro, just behind in sixth. Alvaro Bautista (Aprilia Racing Team Gresini) impressed with seventh for another great result for the Noale factory, with teammate Stefan Bradl compounding the joy for Aprilia as he completed a double top ten finish in P10. Octo Pramac Yakhnich pairing Danilo Petrucci and Scott Redding were the remaining puzzle pieces in that top ten, in P8 and P9 and only three tenths apart over the line.

Marquez’ third MotoGP™ title is his third in four years in the premier class, and his fifth World Championship after becoming 125 World Champion in 2010 and Moto2™ World Champion in 2012.  The plan from the start of the season remained the same until it proved its worth: control, calm and consistency – a new MO that has seen the mistakes of the past craft the success of the present, and a new MotoGP™ World Champion emerge from the ashes of a tough 2015.
Next up, MotoGP returns to the scene of the Island Battle last season – Phillip Island. With the Championship decided, maybe the new Marquez will be revealed as a mask – and the Champion of the world will cut loose and set his sights firmly on a magnificent win number six.