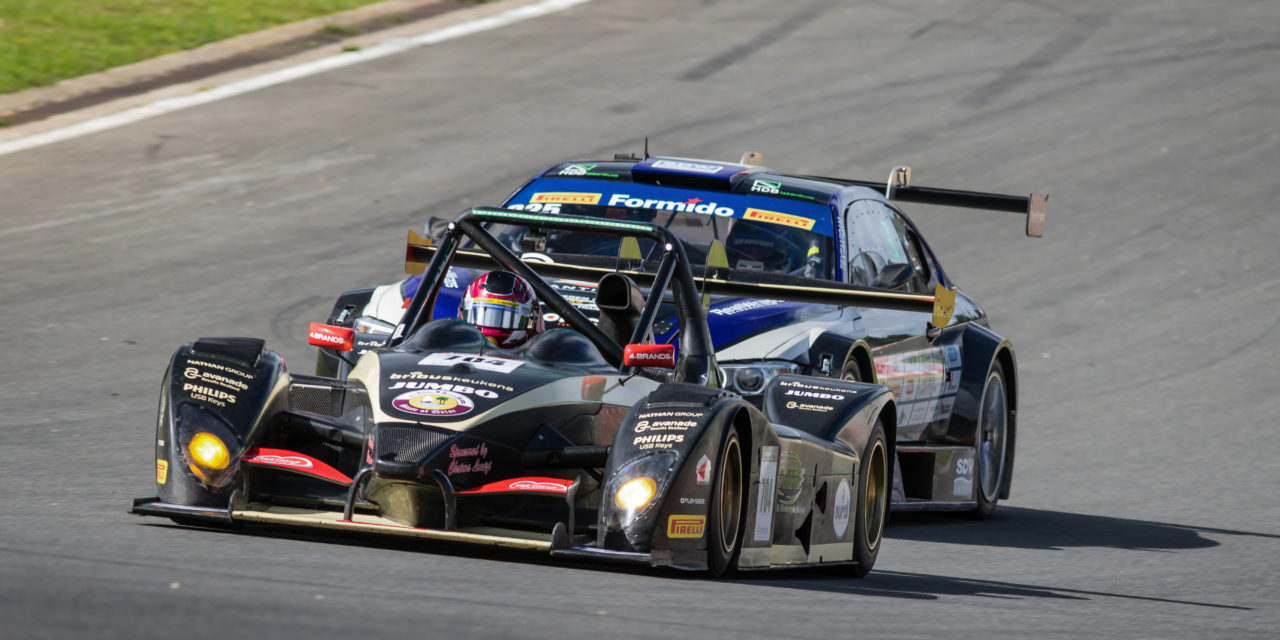 Amro Al Hamad leads one of the GT cars at Zolder

Amro first had a chance to test out the unfamiliar Zolder circuit on Friday during testing, and by Saturday, Amro had reached 2nd fastest time overall. However just before the qualifying session, a sudden rain shower changed the set up to wet tyres. The downpour caused a few crashes in other cars so Amro decided to err on the side of caution and settle for P7 on the grid for the first race on Sunday morning.

For the first time, the GT class cars were joined all together with the prototype Superlight cars, and Amro had a big challenge to start alongside the Porsche’s, Ferrari and BMW cars.

The first race of the weekend was a 60 minute sprint with one stop allowed during the race for fuel, tyres or a driver change, however Amro would drive this race weekend as a solo driver.

On a damp Sunday morning, starting from 7th place on the grid Amro had jumped up to third position by the first few corners and went in a race long head to head battle with the leading more powerful Mosler MT900R car driven by Kosta Kanarogulu and the Norma M20FC driven by local Belgian driver David Wood Head.

In the last 10 minutes of the race the heavy rain started again on the Zolder track, and the team made the bold decision to stay out on slick tyres which proved to be tricky whilst fighting with the top two cars so closely. Amro clung on to his 3rd position admirably rewarding him with his first podium trophy at the Zolder track.

Race 2 at 2:50pm, was to be a 90 minute race, again as a solo driver with a mandatory pit stop at around 45 minutes. The persistent heavy rain reared its head again before the race start and most teams opted for the safer wet tyres again. Howeever, only 10 minutes into the race the track started to dry out and Amro was losing speed with the rain tyres. The Bas Koeten Racing team sprung into action and called an early pit stop to change to slick tyres which lost some extra time initially but Amro had to make the change to keep pace with the leading cars.

This strategy helped Amro climb up to second place overall with another podium celebration and another trophy to take home to Qatar. “I have been very happy with the experience of racing in Zolder. It’s always great to race on a new track to boost confidence and test my ability to cope with new configurations. Zolder was a great personal test to be able to race both races, one of 60 minutes and 90 minutes without a co-driver even in the rain, it was a great booster for my readiness to participate in the Zolder 24 hours endurance race,”

“After my performance here this weekend, I have received a couple of offers to participate for the 24 hours Zolder. Unfortunately I am still struggling to secure the sponsors to help me raise the Qatari flag over international circuits. It’s humbling that I was the first Arab national from Qatar to race successfully here and receive a podium award in Belgium and I hope it will bring a great boost for the youth of Qatar and motorsports. I hope I can be of great benefit to help them develop in the future,” commented Amro post event.

Jelle Koeten, Bas KOETEN Racing Team Manager said, “Amro will be a good edition to the endurance team we are forming. We required 4 drivers and we looked for a final driver but didn’t find the perfect match until Amro proved himself and his progress even though it was his first time to race in Zolder. One of the major milestones for the 2016 season is to win the 24 hours of Zolder Endurance race with this WOLF GB08 Sport Prototype. The car has proved its endurance capabilities and reliability over the races.”

“Achieving victory in such a grueling race as the 24 hours endurance race of Zolder is the ultimate challenge for all, the drivers, the machine and the team behind it where all the factors combine to achieve results. We want to show the racing world the real potential of lightweight prototypes as we demonstrated it in the shorter endurance races, now it’s about time to prove it in the longer endurance races.” he continued.

In closing Amro stated, “I have the ability and confidence to undertake such a grueling challenge as the 24 hours of Zolder as I have already five endurance races under my belt with 4 podium finishes amongst the 5 between Dubai, Abu-Dhabi, Zandvoort and now Zolder. As with many sports as one progresses the investment increases and requires a lot more financial support from sponsor partners.”