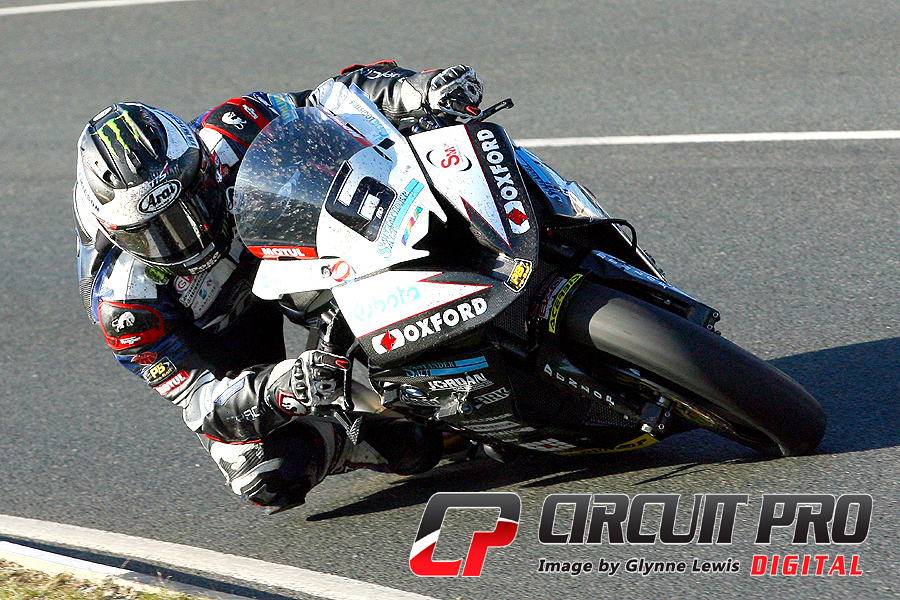 Dunlop was really pressing on but having doubled his lead by the time they jumped Ballaugh Bridge. Hutchinson had reduced it again at Ramsey to 2.9seconds while Lee Johnson moved up to third ahead of Hickman, Bruce Anstey and Dean Harrison.

With an opening lap speed of 133.256mph, Dunlop led Hutchinson by 2.8 seconds with the leader board places behind the leading pair constantly changing. Hickman had moved into third, eight seconds down on Hutchinson, with fourth to sixth now seeing Anstey, Johnson and Harrison occupying the places.

Hutchinson grabbed the lead on the road on the second lap but he was unable to make any in roads into Dunlop’s time and all the way round the lap, the Ulsterman’s advantage grew. Indeed, with yet another new outright lap record of 133.962mph, Dunlop led his BMW rival by a commanding 9.2 seconds as they made their first pit stop at the end of the lap. There was change further behind though as Anstey moved up to third, albeit almost 26 seconds behind Hutchinson, after Hickman retired at Brandywell. John McGuinness, down in ninth at the end of the first lap, had jumped up the order to fourth with Harrison in fifth and Johnson now in sixth.

The pit stops saw Dunlop and Hutchinson maintain their first and second place positions but McGuinness’ crew again worked wonders and that helped him take over third by the time he reached Glen Helen on lap three, with the Morecambe man now some 6.7 seconds clear of Anstey.  Lee Johnson’s good run ended though with a retirement at Appledene while David Johnson slid off the Norton at Sulby Bridge after posting a 130mph lap on his opening lap.

At half race distance, Dunlop had stretched out his lead slightly to 11.2seconds and now almost had Hutchinson in his sights on the road. McGuinness had also pulled away from Anstey with the difference between the two Honda riders having gone out to 11.8seconds. Harrison was holding station in fifth with Manx local Conor Cummins moving up to sixth.

Coming into the second pit stop and two-thirds race distance at the end of lap four, Dunlop still didn’t have full control of the race as the gap was still only 10.6seconds. Hutchinson and McGuinness were circulating on the road together and looked secure in second and third with the lower leaderboard places also becoming more settled, Anstey, Harrison and Cummins still occupying fourth to sixth place.

Dunlop’s team got him in and out quicker than Hutchinson and his lead grew by an additional five seconds, he now had him firmly in his sights on the win and was able  eventually overhaul both Hutchinson and McGuinness on the road. He eventually took the chequered flag from Hutchinson by over twenty seconds with McGuinness taking his 46th TT podium in third. McGuinness took his 46th podium with his third place finish

Harrison grabbed hold of fourth on the penultimate lap from Anstey as Cummins, Rutter, Johnston, James Hillier and Ivan Lintin   rounding out the top ten.

The results saw Hutchinson end with 115 points to be a comfortable winner of the Joey Dunlop TT Championship with Harrison second on 80 and Dunlop third with 70.

Meanwhile, Dan Hegarty was the first privateer to finish in an excellent 11th and that saw him clinch the TT Privateer’s Championship with 91 points to Jamie Coward’s 72.

The podium press conference then exploded into a war of words between winner and outright lap record holder Michael Dunlop and second-placed man Ian Hutchinson while John McGuinness looked on.

Dunlop spoke first and was clearly delighted with the win. “I came out fighting today. I want to thank my team for putting a good bike under me. It’s fantastic to stand here and give them that privilege. I was a bit peeved about what happened on Wednesday, but that’s the way it goes. All those records in one race isn’t bad.”

Then it was John McGuinness turn.“ It’s my 20th TT and I never thought at 44 years of age I would be on the podium for the 46th time. I’m happy to be hear, the Fireblade is a 08 model and next year we will have the new model. I set off steady at first and then at Parliament Square I got a tow off Hutchy and was learning from them both. Everyone is pushing hard. It’s been a hard week with great weather.” Then the fireworks started. Hutchinson was clearly unhappy with the Dunlop camp as he said they issued a protest following the second Supersport race and accused Keith Flint’s Came BPT team of using oversized pistons in the Yamaha R6 which carried Hutchinson to two middleweight wins this week.

Dunlop himself had been ruled out of the first Supersport race result after his engine was found to be using illegal coated cam buckets installed in the motor two years ago when they were inside the regulations.

Hutchinson also intimated that Dunlop had received preferential engine treatment from BMW, which Dunlop denied, saying that all the BMW riders used the same spec motors.

“We struggled with the engine we had last week, it doesn’t have the same power that Michael’s has got so I opted to run the Superstock engine today. The bike was great and faultless but not the thing to win the race. The engine we had last week has all top end and no bottom end, where the later spec engine that Michael’s team have has top end and bottom end,” said Hutchinson.

“I have done my best to congratulate Michael all week but I am pretty disgusted with the behaviour on Wednesday to be honest. The scrutineers suspected something but there was nothing wrong, Michael’s team protested us and then he tried to spread a rumour we had oversized pistons. I need to have a think about coming back to the TT to be honest unless the organisers explain what’s going on there I might not return.”

Dunlop countered with a smile on his face saying: “It was a scrutineer pointed at it, not me, so if he wants to bitch at me, that’s no problem. I am a big enough man to take it on the chin, it makes no difference to me.

“My engines are no different than anybody else’s in the Superbike. I would like to say thank you to the boys in Munich. Even though BMW got rid of me, I still have some friends there and they put me a good engine together but they are the exact same that anyone can buy.”

There’s no doubt that this subject will be discussed long after this TT has finished.