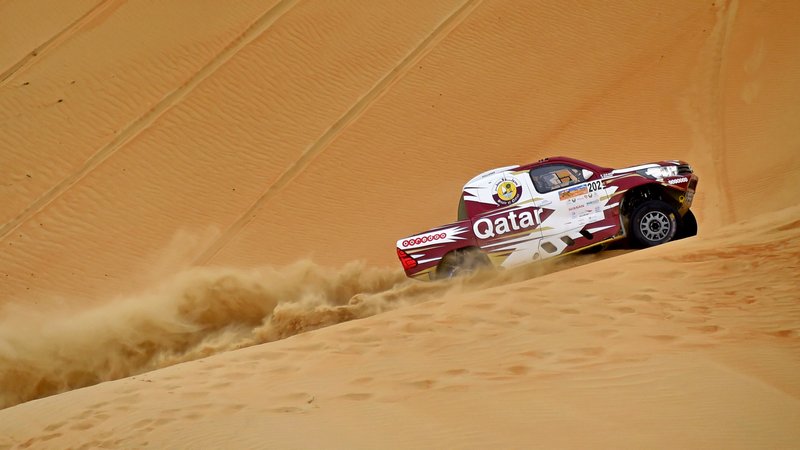 Russia’s Vladimir Vasilyev and Konstantin Zhiltsov maintained hopes of a third successive Desert Challenge triumph in a Mini by climbing one place to third, although at 13 mins 30 secs off the pace will surely require Al Attiyah to find problems in order to achieve the hat-trick.

After having to replace the gearbox on his Abu Dhabi Racing Mini before the start of the stage, the UAE’s Sheikh Khalid Al Qassimi was unable to improve on his ninth place overall from the previous day.

The retirement of eight-times Desert Challenge winner Marc Coma has guaranteed that there will be a new bikes champion this time, and a fascinating contest is developing between three of the world’s top riders to decide the outcome.

Overnight leader Toby Price finished the day in third place behind Quintanilla and Dubai-based British rider Sunderland, but the leading trio are separated by just 2mins 48secs after powering their way through the stage almost within touching distance of each other at times.

“The Nissan Patrol stage is always one of the most testing in the Desert Challenge, and today was no different,” said Mohammed Ben Sulayem, President of the Automobile and Touring Club, the rally organisers. “This was cross country desert rallying at its best.”

After the top ten riders had set off on the Nissan Patrol stage at normal two-minute intervals, the remaining 29 bikes featured in a spectacular mass start in two waves, before the cars followed them onto a competitive section which lived up to its reputation as one of the most demanding.

Reaching the finish, a happy Al-Attiyah said: “It was a very difficult stage, needing a lot of concentration on the dunes and there were some very sharp ones. Driving the new car in the sand dunes was a very good experience. The Toyota is working very well, despite having less torque than the Mini. Today I gave 100% and I’m very happy to finish with such a lead.”

Al-Rajhi said: “It was a good stage, and a better result than yesterday. I’m still getting used to the new car but it was good fun going through the dunes, they are my playground after all. But it was a tiring stage. Coming in just after Nasser is a good indication though.”

Defending champion Vasilyev said: “It was a good stage, very sandy but not too hot. The visibility was tough and there were some very difficult dunes. I lost a little time, maybe 5 minutes minimum, but we pushed a lot and found the steeper dunes more difficult 50km from the end.”

Al Qassimi completed the stage to say: “It was a tough day with some sections having many dunes with blind drops. One caught us and we almost rolled. I hurt my neck so after that I backed off completely.”

Quintanilla reached the end of the stage to say: “It was quite a long stage and pretty tough. I had a good start position and was catching up with Toby and Sam at refuelling. It was cooler today, but it was still tricky through the dunes as there were some lights making it difficult to see.”

Sunderland said: “I rode out mostly with Toby and Pablo but it took me some time to catch Toby at the start, then we all rode together, I did bury my bike in a dune towards the end and lost about 10 seconds but overall it was good. I’m enjoying the temperature but being overcast affects the visibility, makes it harder to see. I’m looking forward to tomorrow.”

Price commented: “It was a long but good day, some challenging dunes with one which got me off guard. It has been very much plain sailing, with a nice tussle between the three of us in the last 30km. The weather is nice and I’m pleased it’s not 40 degrees plus.

Taking place under the patronage of H.H.Sheikh Hamdan bin Zayed Al Nahyan, the Ruler’s Representative in the Western region, the 26th Abu Dhabi Desert Challenge POWERED BY Nissan is organised by the Automobile and Touring Club of the UAE, the national motor sport authority.