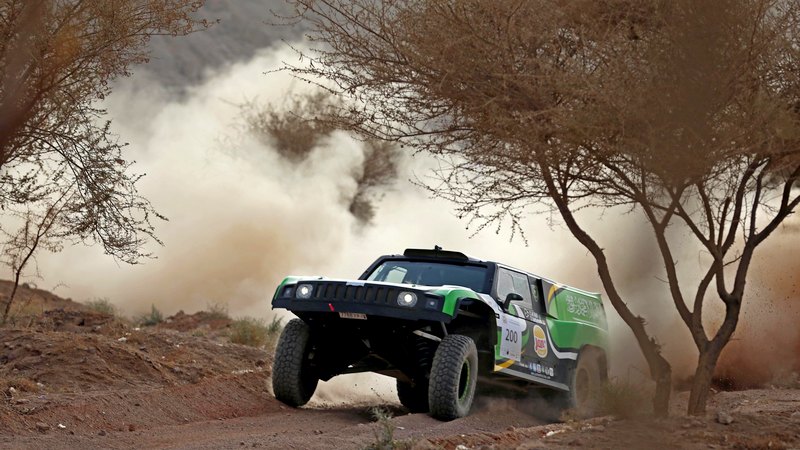 The Riyadh driver began the final leg with a lead of 1min 01min 46sec and extended that to a winning margin of 1hr 23min 45sec to confirm a second successive win in his powerful Hummer and a record fifth in total.

“I am extremely happy to win this rally for the fifth time,” said Al-Rajhi. “I notice the progress the event makes year-after-year and it is getting better with the support from Prince Saud Bin Abdul Mohsen Bin Abdul Aziz, Prince Abdullah bin Khalid and Prince Sultan Bin Bandar Al-Faisal.

“The competition was different this year and I have noticed the progress that all the drivers are making and that reflects in the atmosphere of the rally. I had a few early setbacks. We lost our way in the first stage and had to retrace our steps to avoid getting lost and missing a waypoint and the engine also stopped for some minutes. I had a different strategy this year. I took it easier and controlled my pace to ensure that I could win.”

No one in the 46-field was a match for Al-Rajhi, although Rajah-Fahan Al-Shammeri drove impressively in his Nissan Patrol to claim fourth overall and victory in the T2 category. “I am delighted to be the champion and I want to remain the champion,” said Al-Shammeri. “I hope that Nissan will give me more support next year.”

Khalaf-Jouan Al-Shammeri steered the leading Toyota home in eighth position and the experienced Ahmed Al-Sabban was fifth in a Ford Raptor.  There was disappointment for the Lebanese driver Emil Khneisser and his Russian navigator Alexsei Kuzmich. They suffered persistent gearbox problems within sight of the finish in their Nissan Patrol, lost fifth place and slipped out of the top 10.

Qatar’s Sheikh Hamed Bin Eid Al-Thani began well with the second fastest time in the super special stage, but technical issues accounted for his Nissan Patrol and the likes of Khalid Al-Jaflah, Atif Al-Zarouni and Ahmed Al-Shegawi also had their own fair share of problems that ruined potentially better results. Al- Zarouni, Yayha Ali-Abdu and Fahd Al-Abdulattif actually started the final selective section and then returned directly to the finish.

Abdul-Majeed Al-Khulaifi retained his quad title with a comfortable victory over Heshayan Al-Heshayan’s Yamaha and Ahmed Al-Nasser rode the solitary Honda motorcycle and completed the event once again. Abdulsalem Hamam finished an unofficial third in the quads.

The rally was staged under the patronage of His Royal Highness Prince Saud Bin Abdul Mohsen Bin Abdul Aziz, Governor of Ha’il, President of the Supreme Commission for Ha’il Development and the Head of the Supreme Commission of the Ha’il Rally. The SAMF runs under the chairmanship of His Royal Highness Prince Sultan Bin Bandar Al-Faisal and the event was organised in conjunction with the High Authority for the Development of Ha’il.

Hopefully it’s not a pig

They should play O Fortuna

Will it be a tragedy or a comedy?

A huge THANK YOU to all our fans around the world! 🙌 ... See Less

The Dutch Grand Prix is going to be a madhouse you've never seen! I bet that'll be a record breaker in viewer numbers

Today the F1 is pretty poor. We like realy fights of cars, pilots and factorys like in the past. These F1 is not good for me. Maybe I not sure to continue to see it.

Really wish ESPN would increase the coverage this year. Last year was nice having all FP, qualifying, and races broadcast, but they cut away from the post-race at Sky Sports F1's first commercial break.

Make it more accessible in the UK. This deal.with Sky is killing us. F1 is the only sport I watch and their fees are unfair

Thank God that Channel 4 F1 exists and provides FTA highlights for UK viewers because the cunts at $ky F1 have nabbed almost all of the live coverage.

Really wish Canada would not get the shitty TSN version. I absolutely hate when you are watching the race and the commericals come on while the race is still running. When Vettle smashed into Hamilton in Baku a few years ago I had to watch that in some tiny little screen in the corner while listening to the same Acura commercial on repeat for 2 minutes.

I hope they’ll show more of the mid pack battles this year and focus on more of the drivers and teams during the races.

Thank you for Fox Sports Asia for the 2019 broadcast from practice sessions to raceday. Top broadcast 💯

Brazil italy uk germany and netherlands biggest markets. Yet no german grand prix?? Almost no british gp until a last minute deal and italy too. F1 continues to want to go to these new fancy street tracks ahead of the old school tracks which promote great racing. It used to be a good balance between the old school circuits and the new. Its now gone too far the other way.

Sounds a little bit fishy. I used to know lots of people that watched it every week it was on before the greed took over and ruined it. I know only know 1 person who pays to watche it.

In Latin America we are bound to the whim of FoxSports, and only the “Premium” (paid) channel have the sunday races live, the others put it after american football or unimportant UFC fights.

Counted the same viewer 21 times. Just a pity we get the Sky feed with mostly crappy commentators that love the sound of their own voices.

It's just a shame that SKY greedily dug there claws in and took away the free to view on ch4.. Its discusting how they done that to a sport that has been on normal channel's for years free to watch.. 🤬

For those who can afford SkySports though eh in the UK. Not the rest of us? Well done and congratulations!

These posts are just another platform for those who don’t have it to moan about sky I don’t believe £10 per month is unaffordable I don’t smoke I don’t drink my one guilty pleasure is f1 so I pay for that,most sport is Ppv I pay for my son to have access to wwe,it’s never gonna return to terrestrial tv it’ll always be ppv so get used to it or fork out.

F1 TV Pro is a great way to watch. $70 for the entire season is a bargain. I quit paying for satellite service and went mobile. Best decision I’ve made in a while.

If only I could subscribe to F1 TV Pro. That's right. I can't. Exclusive deals are cancer.

Shame the tv audience as went down in france to 750,000 according to alan prost. And the british audiences too have dropped. #ditchskysports

How much longer I wonder F1 is become so boring, only time it’s interesting is due to the top three teams having problems during race, or yellow flags ,accidents, allowing the ones who simple make up the numbers getting a chance

Would be more if we could see it in the UK, not everyone can afford bloody SKY

What on pay to view only fork out mega bucks to sky....talk about ball “s...t” bring back free to fiew please!!!!!

Shame you don’t appreciate your fans enough for the races to be broadcast live on free to view channels in the UK!!! 😖😖

And it would have been a lot more if ‘F1 tv pro’ would provide Dutch or English commentary in Belgium in stead of only French, German or Spanish...

Bring it off Sky and back to a free to air broadcaster, and you'll see those numbers jump.