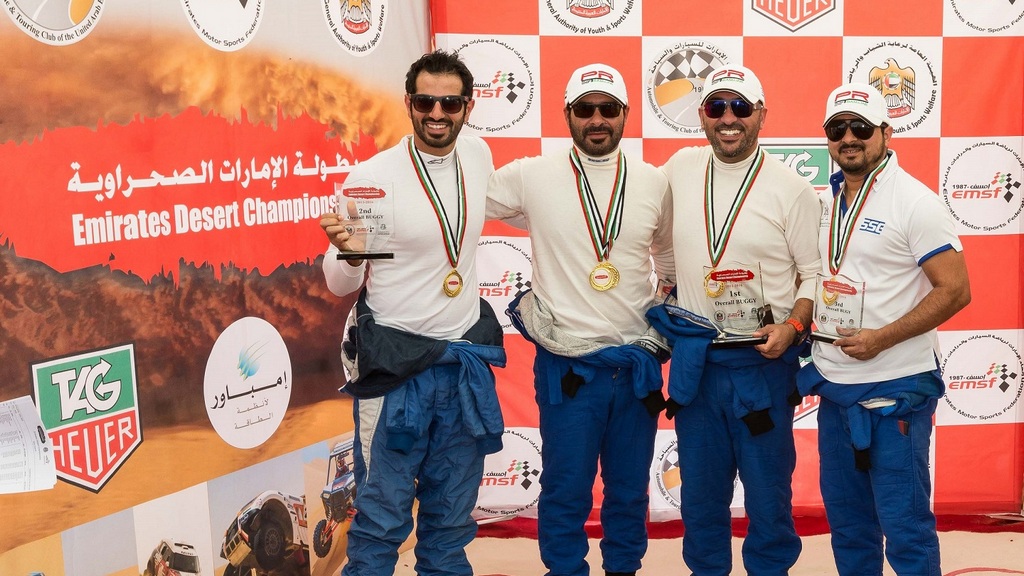 Friday 11th March 2016 – Dubai-Friday saw the fifth and final round of the 2015-16 Emirates Desert Championship and the culmination of a hard fought season for many, with almost every Overall and Class title changing hands from last season.

In the AUTO category, after a hard fought season, Emirati Ali Matar Al Ketbi will rue technical issues at the final round that allowed compatriot Khalid Al Jafla to take the Overall AUTO Championship, in addition to the T3 Class. Al Ketbi ends the season as winner of the T1 Class in compensation. At the final round, Al Jafla debuted his new T3 Yamaha YXZ 100R, the first in the country, and will now take the vehicle to Saudi Arabia for next week’s Ha’il Baja as a final test before hopefully using it in the upcoming Abu Dhabi Desert Challenge. Another driver in good form prior to the Desert Challenge is Emirati Ahmed Al Fahim, who has dominated the BUGGY category this season. Second place in the final round behind his teammate Omar Sawan was enough to crown Al Fahim, who regains the title he last held in the 2013-14 season. The one-two finish at Round 5 was also enough to crown the Polaris Racing Team UAE as the AUTO/BUGGY Team Champions for the season, impressively taking maximum points in each of the five rounds.

In the QUAD class, arguably the most competitive of this season, Mansoor Al Suwaidi won the final race of the year to pick up the title. His nearest rival on the day, Abdulmajeed Al Khulaifi of Saudi Arabia pushed him all the way, with the two riders separated by just one second at the end of the day’s race. Amazingly, if Al Khulaifi had pipped Al Suwaidi at the chequered flag, he would have been crowned the season’s winner by a mere point.

In the MOTORCYCLE category, after his retirement at the previous round, it was back to winning ways in dominant fashion for South African Kawasaki rider Ross Runnalls who won the final round by a staggering nine minutes from second place Briton Olly Eveleigh. Emirati Mohammed Al Balooshi finished third on the day to secure the runner up spot in the championship.

In the other MOTORCYCLE classes, a mechanical breakdown to veteran Brit Steve Blackney allowed Warren Christie to take the win and his maiden title in the Over 450 Class, while a similar mechanical mishap to Sam Smith in the Marathon class benefitted rival Tom Childs, who took the win and season title. In the Masters Class, Finn Janne Tuohino capped off an excellent debut season in the championship with a win on his way to the title. In the Ladies Cup, last season’s champion Sune Schaffler won the final race of the season to tie with the inaugural ladies champion from the 2013-14 season, Vicky Northway, at the top of the standings, with the two being classed as joint champions for the season.

Finally, the Vendetta Racing KTM-UAE Team were crowned as MOTO Team Champions for the season, beating the Sandy Helmets by just one point, with last season’s winners, SRG Husqvarna, in third place.

“It has been an exciting finish to the season, with championships won and lost by just a few seconds or a couple of points. This is what real racing is all about. To those who won I say well done, and to everyone else, there is always next season,” said EMSF Chairman Mohammed Ben Sulayem.

“On behalf of the organisers, I would like to thank all the competitors, teams, and, most importantly, volunteer officials, without whom the events wouldn’t take place. We have greatly enjoyed this past season and are already planning how to make things bigger and better next year!”

The Emirates Desert Championship is the national baja rally championship for the UAE and features cars, buggies, motorcycles and quad bikes. It is organised by the Emirates Motor Sport Federation (EMSF), with the support and assistance of the Automobile & Touring Club of the UAE (ATCUAE).

It was a first American victory for Casey Currie as he ran in an overall victory of over 40 minutes. 🇺🇸

Here are the highlights 👇

Two Americans atop the podium! Awesome job Casey and Ricky!

And my love for Dakar keeps on growing and the love for racing. Long live Dakar great job to all who participated to make this the worlds greatest rally. Absolutely amazing!🇰🇪

Hope it's actually red this time.

Are they revealing a new street car or a new racecar?

Looking forward to a better 2020

Ferrari needs to focus on spending money on a winning car to win the championship,not spend money on a launch/presentation at a theater..

Will it have wings?

They better show up..

MM93 ❤ one of the greatest innovators of modern MotoGP racing!

Am I the only one who finds his hyperactive commentating style on a freakin' videogame rather embarrassing?