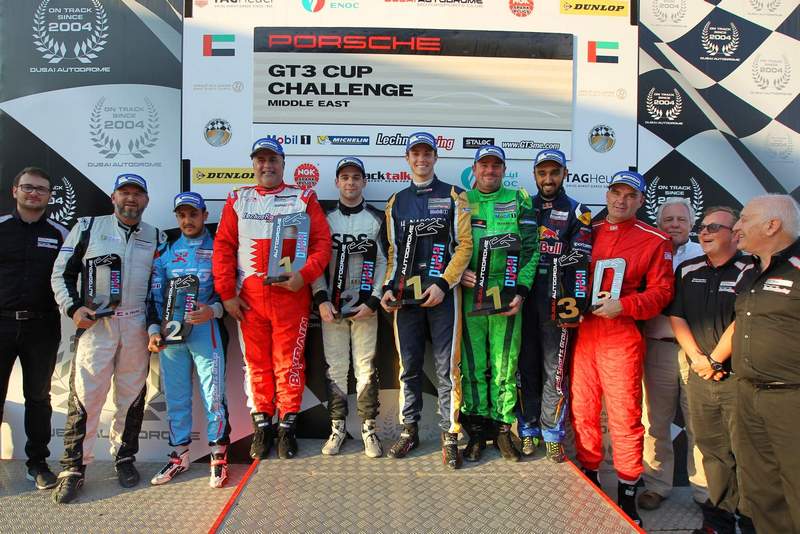 Dubai, UAE, 20 February, 2016: Jeffrey Schmidt in the Al Nabooda Racing Porsche was the double winner in two Porsche GT3 Cup Challenge ME races, on a day packed with ten races at Dubai Autodrome.

In Race 1 of the Porsche GT3 Cup Challenge ME Schmidt, beat second placed Abdulaziz Al Faisal in the Red Bull backed car with Zaid Ashkanani finishing third in the other Al Nabooda Racing Porsche, ahead of Charlie Frijns in fourth and Wolfgang Triller fifth.

Ryan Cullen put the disappointment of a DNF in the first race and chased Schmidt all the way to the chequered flag in Race 2. Schmidt winning by a mere 1.5 seconds with Cullen in runner-up. Third placed Al Faisal managed to fend off Ashkanani in the battle for the final podium spot, with Frijns in fifth.

Leon Price in the Dragon Racing Ferrari and Porsche driver Wolfgang Triller shared a win apiece in the two NGK Racing Series races. Price doing the business in Race 1 after Triller was penalised and relegated to second.

In Race 2 Price did not start and Triller made the most of it to take victory ahead of William Martin in the sister Dragon Racing Ferrari.

Binladen was again unstoppable in race claiming a comfortable victory, while Tannir got the better of Al Muyni, the duo crossing the line almost side by side in second and third respectively. Nawaf Al Shuaibi was fourth ahead of fellow Yamaha rider Mossberg.

Another Yamaha rider, Kris Murphy, bagged maximum points as he ended up tops in the Rookie Class race-within-a-race.

It was a historic day for the two wheel brigade as rider Sabah Mukri became the first female to compete in a UAE Sportbike Championship race. She finished 12th in the first race and 11th in race two.

Romain Lutter and Ludovic Loffreda teamed up to win the Radical Middle East Cup 45 minutes mini-enduro style Race 1 by 6.6 seconds from Richard Ardolino in second place, who managed to see off the concerted challenge of Julian Griffin in third place – the pair separated by half a second as they crossed the finish line.

In Race 2 Griffin scored a popular win, crossing the finish line 18 seconds ahead of Jani Hjerpe and third place going to the Lutter and Loffreda combo, with Ardolino fourth.

Cato Poulsen won Race 1 in the Formula Gulf 1000, ahead of Galhuseyn Abdullayev and Omar Gazzaz. In Race 2 it was a case of role reversal with Abdullayev taking top honours ahead of Cato and Gazzaz again in third.

Dubai Autodrome hosts the next round of the UAE National Race Day of the 2015-2016 season on 11 March.

A very satisfying day for the Pole 🇵🇱👏 ... See Less

Although I’m happy for him this doesn’t mean anything. We don’t know how anyone was running or what teams were trying to achieve.

Not just for one😎

There are some rumors about f2 Vietnam and also bahrain maybe removing from calender cause of covid 19. Are there some news?

So kubica is 2.5 sec faster then raikkonen and still he is without a seat 😱😱😱😱 just imagine him in a merc! He wuld be 25time champion 😂😂😂😂

Wish the entire season was this mixed up and not just Mercades up front. Makes it boring.

Calling it right now, Kubica gonna be back on the grid in 2021. Wouldnt be suprised if he replaces Kimi

finally a good amount of laps from ferrari without issues... hope they keep this momentum

Where are these people now who said he is an embarrassement to F1, that he can't drive properly with one hand? Clearly, the car was a problem last year. Even Claire admitted Robert's car behaved unpredictably. And yes I know it's testing and I know he was in quali mode, but his time shows he still has potential.

Kimi fanboy will get triggered after they see Kubica laptime. Good, this is my wet dream to see two most anoying driver fanboy group in F1 to fight

I was about to say that is a good lap count for Grosjean and the Haas and then remembered he was the only one driving that car today and it's only 17 more than Lewis, who was only in his for half the day.

the lap time should be written in the color of the tire used to mark the time, , whether in training or racing...

How many sandbags did Mercedes bring to Barcelona this year??

It’s only testing I know but it’s nice to see him at the top of a chart, he was so fast back in his prime, he really should have been a champion.

Quick enough for P9 in quali last year. Testing times aren't much to go by.

A competitive car is all he needed.. Wish he would have moved to alpha romeo and paired up with Kimi and fought for mid field racing.... P1 at last for Bob... ❤❤❤

Two seconds slower than last weeks fastest time! The next two days will see the teams chasing performance so the times will ramp up.👍

We don't know what the teams setups are. Not saying it's not impressive but he's about a second and a half off last week's fastest.

So now all the Polish fans with last years conspiracy theories as to how Russell annihilated their man will claim that this proves that Robert truly is the best driver on the track this year.

What??? Kimi is 3 sec slower than Kubica in the same car🤔

My concern is... Is McLaren sandbagging?? They are on regular 1:18s and I'm not sure if they have an extra second to lower their times. Are they only focusing on race pace and reliability?

Kubica is fast and Ferrari cars are slow... And also McLaren..

good afternoon, any negotiations with television companies to broadcast MotoGP in Brazil?