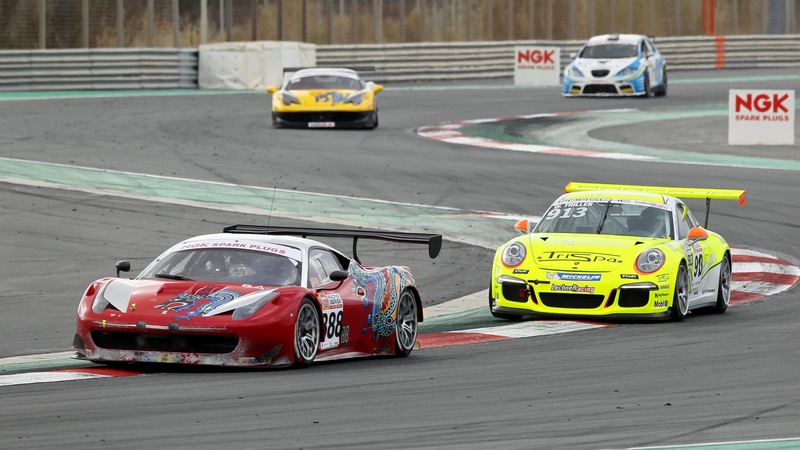 Dubai, UAE, 30 January, 2016: Wolfgang Triller powered to overall victory in both the NGK Racing Series races in his TriSpa Porsche GT3 at the Dubai Autodrome, with second place going to Leon Price in his Dragon Racing Ferrari 458.

There was little to separate the pair all day, with Price running Triller close in the first race and then appeared to have the better of the Porsche driver in Race 2 but a mistake cost him time and allowed the Porsche driver to claim the double on the day. Price nevertheless set the best lap time of the day.

In Class 1, Costas Papantonis posted two victories in his Gulf Petrochem SEAT, as did Alqassim Hamidaddin who bagged both wins in Class 2 at the wheel of his Honda Civic.

Reigning Clio Cup champion Alexandros Annivas was untouchable in the Gulf PetroChem Renault Clio in both races, with Colin Boyle in second and Thierry Seys third in both races.

Aqassim Hamidaddin won Class 2 to in his Honda Civic, with Alexandros Annivas second in class, but doing enough to take top spot in the Clio Cup category, ahead of Colin Boyle and Thierry Seys.

After dominating the two UAE Sportbike races on day one, Kawasaki rider Abdulaziz Binladen was again unstoppable, winning twice and with it bagging maximum points on all four rounds held on the weekend.

It was a remarkable two days for the Saudi Falcons rider who said, “I want to thank my crew and sponsors for a great bike this weekend. It was windy and slippery, so there were some challenges, but I can say that we had the pace and with that we made it happen. I am very happy.”

Kawasaki rider Ahmed Almuyni and Mahmoud Tannir on a Honda scrapped throughout the weekend, and finished second and third respectively in both races on the final day.

Yamaha rider Kris Murphy was top rookie in the first race, but Friday’s big winner Leigh Young, also on a Yamaha, bounced back from a DNF in Race 1 to claim victory in Race 2.

Richard Ardolino drove to impressive and controlled win in the Radical Middle East Cup mini-enduro race by a 17 seconds margin over Julian Griffin who was next across the line -the pair doing the race solo.

As they crossed the finish line at the end of 45 minutes of racing, second placed Griffin was 0.787 of a second ahead of the car shared Paulo Necchi and Catalin Voicu.

Friday race winners Ludovic Loffreda and Romain Lutter were fifth this time out.

Al Nabooda Racing driver Jeffrey Schmidt turned the disappointment of a first lap collision, in Race 1 on Friday, into the joy of victory when he took first place in the Porsche GT3 Cup Challenge Middle East.

Schmidt controlled the race to score his seventh win in eight starts, claiming the fastest lap of the race too, and thus extending his lead in the championship standings.

Behind him Charlie Frijns chased hard in the Frijns Structural Steel backed car, but had to settle for second with Friday’s race winner Ryan Cullen, in third, pushing him hard all the way to the finish line.