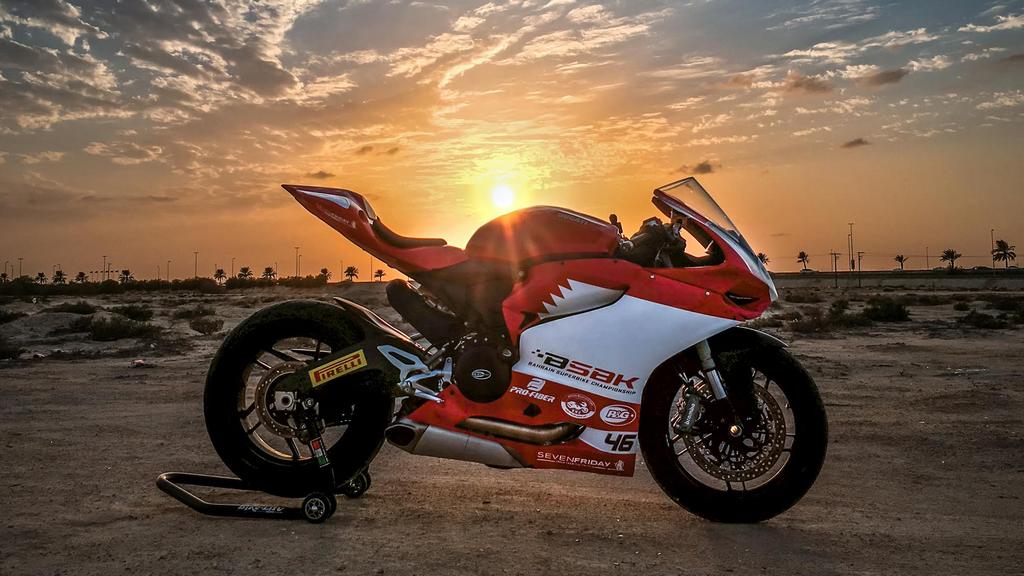 Championship co-founder Hussain Al Kooheji talks to us about how the championship has been years in the making and has now been officially launched and registered with the federation in Bahrain.

‘We wanted to develop a championship that was fair, affordable and would give riders from across the region the opportunity to race without having to worry about the logistics of shipping bikes back and fore for race days, said Hussein.

The race series will have 14 riders, all riding identical Ducati 899’s provided by BSBK.  The entry fees include the use of the bikes and all repairs that would normally be made under warranty. Also included are tires, fuel for the races, and regular servicing to keep the bikes in race ready condition. At the equivalent of AED 35,000 that’s a good deal when looking into the costs involved in racing.

‘Our aim is to provide a fair playing field at championship and a professional racing environment. For this reason we selected the Ducati 899 as the bike of choice. We will provide the bikes, all equally set up, and the rider will be allowed only to change suspension settings to suit themselves but not make any other changes,’ said Hussein. During the championship there will also be celebrity guest riders making an appearance. Carlos Checa, now retired from international competition and 2011 World Superbike Champion, will attend Round 1 in January riding along with the championship competitors in the practice sessions and available in the pit garages to help and guide the riders throughout the day and there will be an FIM Clerk of the Course officiating events.

Spectators will be able to access Bahrain International Circuit at nominal fee which is equivalent to AED 20 for adults and AED 10 for kids where they will enjoy watching the races, action and entertainment from the stands and pit area.

‘It was important for us to bring in talent from the international motorcycle racing community. We have riders from Bahrain, Qatar, Saudi, Kuwait and one that will fly in each time from the UK. Bringing a personality like Carlos Checa adds to the experience of being in the championship and will give the riders exposure to champions from the highest levels of racing. Wait and see who we bring in for the next five rounds!’ Hussein said.

‘We have excellent support from our partners in the championship including Wheels of Arabia, the Ducati dealer in Bahrain and from our sponsors Seven Friday, Pirelli, R&G Racing, and Pro-fiber. We’re also grateful for the support of Bahrain Motorcycle club and of course Bahrain International Circuit.’

If you want more information on the BSBK series check their website -www.bahrainsuperbike.com

“There is potentially one last place to fill on the grid for any aspiring racer but you’ll have to get yourself registered quickly for the first round in January,” commented Hussein.