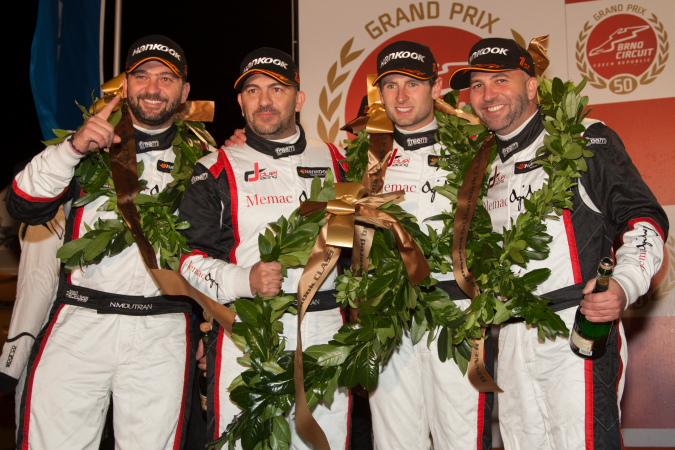 Ramzi, Nabil and Sami Moutran, all from the UAE, and British driver Phil Quaife, who raced the team’s SEAT Leon Cup in the A3T class.

BRNO (12 October, 2015) – Swiss lady racer Chantal Kroll and UAE-based team Memac Ogilvy Duel Racing won the overall drivers’ and teams’ titles in the 2015 24H SERIES powered by Hankook. In both competitions, the battle went down to the wire and the outcome of the final season round, the Hankook 12H EPILOG BRNO, had to bring the decision in the battle for drivers’ and teams’ honours. Chantal Kroll, who already had secured the Ladies’ Cup during the previous round at Barcelona

Chantal Kroll, who already had secured the Ladies’ Cup during the previous round at Barcelona, scored her points with the Hofor Racing Mercedes-Benz SLS AMG GT3 in the A6 class and the Hofor-Kueperracing BMW E46 M3 Coupé in the A5 class.

The success for Memac Ogilvy Duel Racing was the result of the achievements by the three brothers, Ramzi, Nabil and Sami Moutran, all from the UAE, and British driver Phil Quaife, who raced the team’s SEAT Leon Cup Racer in the A3T class.

Having been granted International Series status by the FIA at the end of 2014, Dutch agency CREVENTIC, promoters and organisers of the 24H SERIES powered by Hankook in co-operation with Dutch National Racing Team (DNRT) were able to award points for their races for the first time this year. In the overall drivers’ standings, Chantal Kroll scored class wins at Dubai and Paul Ricard and a second place at Barcelona. Combined with fourth places at Zandvoort and Brno, this was enough for her to win the title with a total of 123 points. The Moutran brothers and Phil Quaife follow in second to fifth place, three points down.

In the teams’ standings, Memac Ogilvy Duel Racing won its class at Dubai and Barcelona, came second at Mugello and Brno and third at Paul Ricard to win the title with a total of 120 points, three more than German team Hofor-Kueperracing and British outfit RAM Racing, who are tied in second.

In the A6 class drivers’ standings, RAM Racing drivers Tom Onslow-Cole and Thomas Jäger claimed the title with a total of 117 points, Australian Peter Leemhuis is on top in class SP2 with 119 points.

A2 class drivers’ honours go to Italian Luigi Stanco and Swiss Stefan Tanner with a total of 106 points. In the D1 diesel class, Hungarians Norbert Nagy, Witold Elekfy and László Csuti ended up first with a total of 39 points. In D2, Brits Jamie Morrow, Tom Barrow and Nick Barrow won the title with a score of 54 points. RAM Racing had already secured the A6 teams’ title at Barcelona and concludes the season with a total of 117 points. In the 997 class, French team Ruffier Racing wins with 101 points. SP2 teams’ champions are MARC Cars Australia 1 with 110 points. Speedworks Motorsport 2 secures the SP3 class teams’ title with 100 points. Hofor-Kueperracing are the new A5 class teams’ champions with 117 points. Memac Ogilvy Duel Racing also added the A3T teams’ title to its overall title win and comes out on top in its class with 120 points.