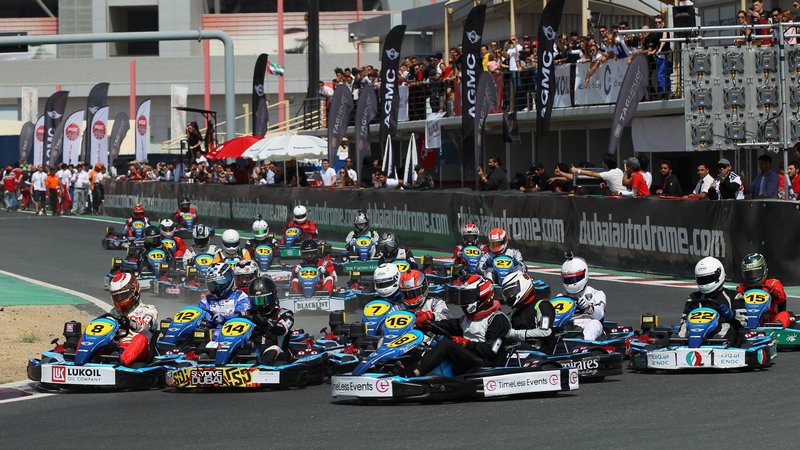 Between a curtain-raising SWS Sprint Races and the season’s climax on 29-30 April, the Dubai Autodrome and Kartdrome tracks will stage an impressive 50 days of practice, qualifying and racing activity.

The latest Autodrome race season was officially launched during a function hosted in Dubai last Wednesday by Mohammed Ben Sulayem, President of the Automobile & Touring Club of the UAE and FIA Vice-President.

Dubai Autodrome General Manager, Richard Birch said: “The highlight of the year will be the now traditional Hankook 24H Dubai on 14-16 January 2016, along with a host of UAE National Race Days at the Autodrome featuring: Porsche Cup Middle East, UAE Superbikes, Radical Cup Middle East, NGK Racing Series, Formula Gulf 1000 and for the first time at the venue the MRF Challenge Formula 2000 Championship, plus the Fun Cup endurance race.”

“For the DAMC series we have once again kept the entry fees the same as they have been for the past decade as we continue to focus on developing motorsport in the UAE.  We have listened to the considered input from competitors and agree that stability is the best way forward, and this has been embraced for the forthcoming year,” added the circuit boss.

Kartdrome Manager Ryan Trutch said: “Our venue and staff is braced for a very busy season of racing with the Dubai O-Plate race day in January, featuring international drivers against our local home grown talent – this will be one of the highlights of the karting season.

“We are proud to host two double headers of the 2015-2016 UAE Rotax Max Challenge, along with our world famous Kartdrome Endurance Championship driven by MINI and a busy schedule of Sodi World Series Sprint races throughout the year.”

“We are also excited to have conceptualized Emirates Schools Karting Championship (ESKC) along with the support of the ATCUAE and under the Patronage of Dr Mohammed Bin Sulayem.  We have partnered with circuits Al Ain Raceway, Al Forsan and RAK Track which will provide the effective introduction and development of karting at grassroots level across the UAE,” added Trutch.

Notes: Most of the race dates are preceded by a practice day.  An additional five or six SWS Sprint dates (to take place between January and April 2016) will be added to the roster.

The duel of the season? 🤔

The World Champion and the rookie went head to head in what was one of our first looks into the future. The last few laps in Thailand were UNREAL to watch and it still gives us goosebumps now! 🙌

Battle of the year is austria

2020 no mistake on the last corner. Fabio will win!

Sorry but these are just kids, have you ever seen last Lap duel between Gibernau and Rossi ? That was much more thrilling every time, and they both had good bikes not like Marquez who is clearly on the better bike.

Yes the duel of the season.....wow

Surelly 93 😎🏍️🥇 He is the best, everybody must see that fact

MM and Dovi was a much better last lap!

Oh wow that is incredible racing

That was awesome... Marquez is the greatest ever

Nope, Mugello was the duel of the season.

The duel of the century would have been in 2015, if he pushed with Rossi for Lorenzo and Pedrosa, instead of the crap that he saw.

Fabio can’t wait to watch you this year

Was really really hoping for #ElDiablo to pull this off

Much prefer the commentary on BT sport.

Silverstone was better in my opinion

Fabs you'll get him and I'll lose my voice

Nothing on this years coverage about the charity work supported by the event. Has there been any?

I agree! South America full of spectators. Here it proves it should move back. The track looked better in SA as well. Better still why not move it all over the world.

Fans is exactly what this years Dakar lacked...there was zero local support unless it wasn't televised...sad to see compared to the South Americans who brought so much energy and passion to the event

Wow! 7pictures and not even 25 people... Tells one hell of a story!

I miss the South American fans. Nothing like seeing some beat up old GMC parked up on a huge dune.

Should of been in Russia or all the stans, or Mongolia/China etc

It's good to meet other cultures

Two years in Thailand and two classics! More of the same this year! 🙌

Best of the best mm93

Horsepower circuit yet Yamaha always there.

We followed Alex Albon Ansusinha around for a VERY eventful weekend in Brazil... check out what happened 👀 ... See Less

So many harsh comments about Alex, I wonder if people know/remember that he got a very late call to drive in F1 and didn’t have anywhere near the normal prep and testing time that others have, plus the pressure of changing cars mid year into a top team notorious for dropping their drivers if they don’t perform... I think he’s done exceptionally well and his race craft has only gotten better and better, here’s to podiums in 2020! 👍🏁🏎

These behind the scenes are always so fascinating to watch. That head device is a neat neck trainer. It takes a lot to keep your head up and look during some of those high-g turns.

Just goes to show, you cant just get in a F1 car and put your foot down, the level of fitness these guys have to endure, to comfortably be able to drive the car is massive!

I hope to see him on the podium soon, if Hamilton doesn’t crash into him again 🤣. Really, I wish him an excellent 2020 even if Hamilton will be champ again!

Gets hammered by Max in every qualy session with at least half a second, crashes like an amateur every weekend. Wins rookie of the year. Amazing

Don't get why people are complaining about Alborn, there's worse drivers around. Think this video is very good for people to see behind the scenes of what drivers get up to and that it's not all money parties and bling

Albon has performed mediocre in his rookie year but all he needs is time, anyone remember Lewis Hamilton throwing away his first world championship in China by overshooting the corner of the pit entry? Now look at him.

All the best tiger!

Everyone says give him time. Jesus, real champions dont need time.....this is formula one not bambino karting. Hes a really nice guy though, sports personality of the year maybe, rookie of the year definitely not

This is Formula Parade, a 7 year 2 car Mercedes race.

Marko looked like he didnt even want to shake his hand. Typical for his 2nd driver.

When is drive to survive coming out

Better attitude than max and one of the top rookies 👍🏻

What’s with the name?

Do you want to enjoy the opening round of the 2020 #MotoGP season at the Losail International Circuit? 🤩

Buy your #QatarGP 🇶🇦 tickets before the 1st of February and save up to 25%!➡️http://bit.ly/QatarGP20Tickets ... See Less

Gutted to be missing Losail for the first time in 3 years! ☹️

Hey MotoGP, how are we gonna watch the races in Brazil 🇧🇷 if SporTV didn't get a new contract and fired the best broadcasters (Guto Nejaim and Mundomoto - Fausto Macieira) ??? Please help us urgently!

doha is a no go at moment 😕

Rinaldi Racing will be joining us this 24H SERIES 2020 Season! The German team will be participating with a Ferrari 488 GT3 at MONZA🇮🇹, SPA🇧🇪, PORTIMAO🇵🇹, PAUL RICARD🇫🇷 and BARCELONA🇪🇸.

Great news and a great competitor for the 24HSERIES EUROPE championship!

With a little bit of luck (double diffuser) and the greatest F1 engineer of all time, he won a championship with an almost defunct team who had no money at the end of the season. Happy birthday, Jenson.

I was actually at that GP on my honeymoon. We got soaked. Fantastic race though. Kimi crashed right in front of us.

I was there on the main grandstand. A great race, historic victory. Was a great weekend to be there. I'd love to come back to that circuit again.

My favourite memory of Jenson Button was when he became world champion at Brazil in 2009. It wasn't an easy championship as he went from winning 6 of the first 7 races to being utterly outclassed by the Red Bulls and on occasions Hamilton's McLaren towards the end of the season. The sheer joy, relief and release of winning the title was palpable

Happy birthday jenson really do miss him in f1 really do wish he didn't leave one of the great legends,

Like the guy, don't get me wrong but 2006 Hungarian F1 GP was a fantastic race, a true masterpiece driving by Alonso, the only reason why he did not win the race by a couple of laps difference to the 2nd place was that his engine gave up on him. Alonso fighting and overtaking Schumacher on the outside of the corner and in wet conditions is something trully special. Back to Jenson and the race his real "competition" in the race was Pedro de la Rosa(fininshed 2nd), a slow driver by any standards, we had 8 DNFs and 1 DQ drivers among them Alonso, Kimi, Rosberg,Webber, Kubica, seriously guys I like Jenson but who else could have one the race?

Happy birthday! F1 hasn't been the same since Jenson retired.

Happy Birthday Jense, hope you have a great one with your wonderful family!

A perfect gentleman in a world of F1 drivers. Held his own against every world class teammate he had( Hamilton, barichello, Alonso). Sad that he never got a proper sendoff.

James Allen really was a great commentator. Much better than crofty. He brought alot of enthusiasm. That moment, kimis pass on fisi and the end of the 2008 brazil race his commentary is fantastic. Him and martin were great together

One of my favourite bits of commentary ever, always makes my hair stand on end. Also just one of the nicest guys in F1 🏎️

I remember it very well, JB has always been my fav British driver. Always worked hard to get his championship win. Almost lost everything when Honda pulled out. Have more respect for a driver who has had to work hard for his wins than one who is handed it by being in the best car

This moment was worth the long wait.What a driver and gentleman.My true hero, Happy birthday JB

Happy Birthday to my favourite driver 😘

My favorite driver with a birthday right before mine, which I just find sweet. Congrats on baby Hendrix and Happy Birthday

Lovely how the cars did look that time... "simple", pure and powerfull. No nonsense. Best Era of F1 ever in my opinion.

The best part of this clip is James Allen's commentary. One of the best.