MotoGP: Riders gather under rainclouds at London Bridge ahead of British GP at Silverstone 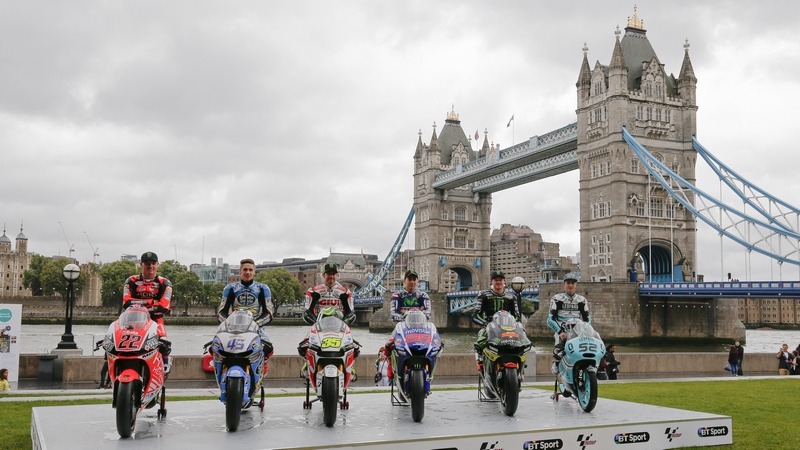 London, Aug 27th 2015 – Ahead of the #BritishGP, the English riders and Jorge Lorenzo gathered in front of one of London’s most iconic locations.

With a tight battle at the top of the MotoGP World Championship and both Crutchlow and Smith recently announcing their plans for 2016, motogp.com had a chance to chat with all the riders.

Jorge Lorenzo is purely focused on challenging for his third MotoGP World Championship title and is pleased with his improvements since the start of the year:

“It’s been a long time since I got to visit this city. We did a little walk across the famous bridge of London and now we have some press-work. It’s a nice break from the week of hard training for this Grand Prix. After Argentina we were 29 points behind and now we are equal so now it’s another little championship of seven races. I hope to always stay on the podium.” On his championship rivals Lorenzo commented: “We still haven’t ruled Marquez out of the fight because there’s still a long way to go in the championship. 50 points seems a lot, but it’s not a lot. For sure Valentino is our main rival, maybe not because of his speed but his points. We’ve been lucky Marc has made so many mistakes this year. We have a good chance to win the championship for Yamaha so we have to take advantage.“

Despite the poor weather fans flocked to meet their MotoGP heroes, a fact that Bradley Smith was elated by: “To be here in London feels very special to come out to support the race. It shows the improvements in MotoGP as people are becoming more and more aware. In the middle of the city, in the middle of the working day and yet people are coming! I’m excited for the weekend, our only chance in front of the home crowd. Silverstone is also my home track and after the great contract news I think I’m having a good week!”

“I think staying with the same team was clever. I’ve worked extremely hard and it’s been a tough road to adjust to MotoGP. We’ve all worked hard and found it after two years, to throw that away would be silly! Next year brings new challenges with new regulations and I wanted to stay with guys I know. For now we need to focus on the British GP,” Smith expanded on his recent contract renewal with the Monster Yamaha Tech 3 team.

It was not only Smith who announced his plans for next year, Cal Crutchlow also revealed he would be staying with his current LCR Honda squad in 2016: “Fantastic news for me. We know Luccio runs a fantastic team and I’m grateful for the project with him and Honda. A great deal for me over the next two years, excited and hopefully we can bring him the best results. We both deserve it.”

It has been a tough season for Scott Redding, stepping from the Open Honda to the Factory machine and he is still unsure of which direction to take: “You arrive to somewhere like Austin or Sachsenring and the bike works! Then you think, ‘OK now we know where to go’ but you turn in Indy and you’re back to square one, down in 12thor 13th without touching anything on the bike. We don’t have a good base setting that works everywhere.”

Sam Lowes has set his aims high for his home race: “I have to win, it’s my home race! It’s a track I like and the bike should work well here. We have to fight for win.”

Moto3 World Championship leader, Danny Kent, also has his sights set firmly on victory: “To get a Grand Prix win in front of our home crowd would be amazing. I’m not feeling any pressure, I’m treating it like any other race. Of course I’ve got a few more bits to do with media but the pressure is the same.”