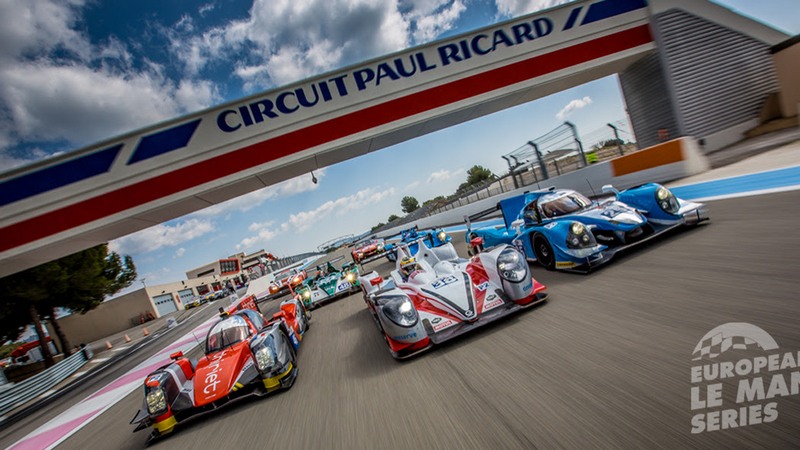 Aug, 25th 2015-Round 4 of the 2015 European Le Mans Series will take place at the Circuit Paul Ricard on the 5th and 6th September and the results in France will set the scene for the season finale in Portugal in October. Set hills on the Cote d’Azur in the South of France, Paul Ricard offers the teams and drivers a very different challenge from the tracks at Silverstone, Imola and Red Bull Ring, with its unique feature of the long 1.8 Km Mistral Straight, emulating the world famous Hunaudières Straight at Le Mans. Provisional entry list

The LMP2 class will once again have the largest grid in Le Castellet, with 12 cars due to take the start.  Victory in Austria last time out has put the Jota Sport trio of Filipe Albuquerque, Simon Dolan and Harry Tincknell at the top of the championship points table but are only two points in front of all French team and Imola race winners Thiriet by TDS Racing, Pierre Thiriet, Ludovic Badey and Tristan Gommendy, and 10 points advantage over Silverstone victors Greaves Motorsport (Gary Hirsch, Bjorn Wirdheim and Jon Lancaster).

AF Racing (ex SMP Racing) will be out in force with the Russian team once again fielding the two brand new Nissan powered BR01s and head to France on a high after Mikhail Aleshin, Victor Shaytar and Kirill Ladygin secured the first podium finish for the BR01 in Austria.

Three strong points scoring finishes sees the Krohn Racing Ligier JS P2 driven by Tracy W. Krohn, Oswaldo Negri and Olivier Pla lying in 4th place in the championship. The distinctively coloured Ligier is powered by the Judd engine, the only non Nissan powered car on the LMP2 grid, and after two 5th place and one 4th place finishes the American team will be pushing for that elusive podium finish in France.

Ireland’s Murphy Prototypes had a good run at Le Mans and a second place finish in Imola.  However a 6th place in Austria for Nathanael Berthon, Michael Lyons and Mark Patterson means they have a lot of work to do at Paul Ricard in the Oreca 03-Nissan to close the gap to the front runners.

The second of four Nissan powered Oreca 03 on the LMP2 grid is entered by Eurasia Motorsport with Chinese driver Pu Jun Jin and Dutchman Nico Pieter de Brujin, who will be joined by LMP2 24 Hours of Le Mans Champion Richard Bradley for the 4 Hours of Le Castellet.

Ibanez Racing make up the balance of the four Oreca 03-Nissans.  The team flying the flag of San Marion, will also be fielding two cars once again.

Pegasus Racing will field the sole Morgan for Leo Roussel and David Cheng and the grid is completed by the Ligier Nissan run by Algarve Pro Racing with James Winslow, Michael Muneman and Andrea Roda.

The new for 2015 LMP3 class has been the talk of the ELMS this year and once again the grid will feature four Ginetta-Nissans.  Victory in Silverstone and Red Bull Ring has put the Scottish duo of Chris Hoy and Charlie Robertson at the top of the points table with two races remaining in the no3 Team LNT Ginetta. Gaetan Paletou finished on the podium in Austria with Mark Shulzhitskiy but will be rejoined by Michael Simpson in the no2 Team LNT Ginetta, the pairing that finished second at Silverstone back in April.

All Italian team Villorba Corse, with Roberto Lacorte and Giorgio Sernagiotto took second place at the Red Bull Ring in the no5 Ginetta-Nissan and will be hoping to take the challenge to Hoy and Robertson at Le Castellet.

Spanish outfit SVK by Speed Factory is currently in fourth place after three races after a non finish in Austria deprived the team of any points.  The drivers Konstantin Calko and Dainius Matijosaltis will be joined by Dutch driver Mirco Van Oostrum in France.

With a grid of eight cars in France, the fight for the LMGTE title is still wide open with just 14 points covering the top seven cars and drivers.

Victory in Austria for the no60 Formula Racing Ferrari of Andrea Rizzoli, Johnny Laursen and Mikkel Mac has propelled the Danish team to the top of the leader board and five points ahead of the no55 AF Corse run 458 crewed by Duncan Cameron, Matt Griffin and Aaron Scott.

Imola Race winners AT Racing will once again run a Ferrari 458 Italia for Italian Alessandro Pier Guidi and Belarussian Father and Son duo Alexander Talkanitsa senior and junior.  A disappointing run in Austria dropped them down the order from 1st to 4th place behind the no88 Proton Competition Porsche of Richard Lietz, Marco Mapelli and Christian Ried.

BMW Team MARCVDS had a better run in Austria with the third fourth placed finish of the season for the only LMGTE spec BMW Z4. The Belgian team will be hoping to take the next step and secure a podium finish in France from Andy Priaulx, Henry Hassid and Jesse Krohn.

The all British no86 Gulf Racing UK Porsche 911 of Michael Wainwright, Adam Carroll and Dan Brown will also be hoping for a change in fortune.  The Silverstone class winners have only scored 10 points in the last two races dropping them down the order to 6th, but only 13 points behind the leaders with 52 points available from the final two races of the 2015 season.

After finishing third in Austria, Peter Mann and Matteo Cressoni will be joined in the no51 AF Corse Ferrari by 2015 LMGTE Am 24 Hours of Le Mans winner Andrea Bertolini at Le Castellet.

JMW Motorsport is the second all British team with George Richardson and Robert Smith sharing the driving at the Circuit Paul Ricard.

Imola race winners Francesco Castellacci and Stuart Hall secured their second win of the year in Austria in the no62 AF Corse Ferrari, with new driver Thomas Flohr joining them on the top step of the podium, moving them up to second place in the championship.

Mads Rasmussen, Adrien De Leener and Francisco Guedes will race in the no64 AF Corse Ferrari, while Giorgio Roda, Marco Cioci and Ilya Melnikov will once again team up in the no63 458 run by the Italian team.

Massive Motorsport will be bringing the only Aston Martin Vantage on the ELMS grid, with Casper Elgaard, Simon Moller and Kristian Poulsen securing a podium finish in Austria to finally get some points on the scoreboard for the all Danish team.

The 4 Hours of Le Castellet will take place in the South of France at the Circuit Paul Ricard on Saturday 5th and Sunday 6th September and is round 4 of the five race 2015 European Le Mans Series.