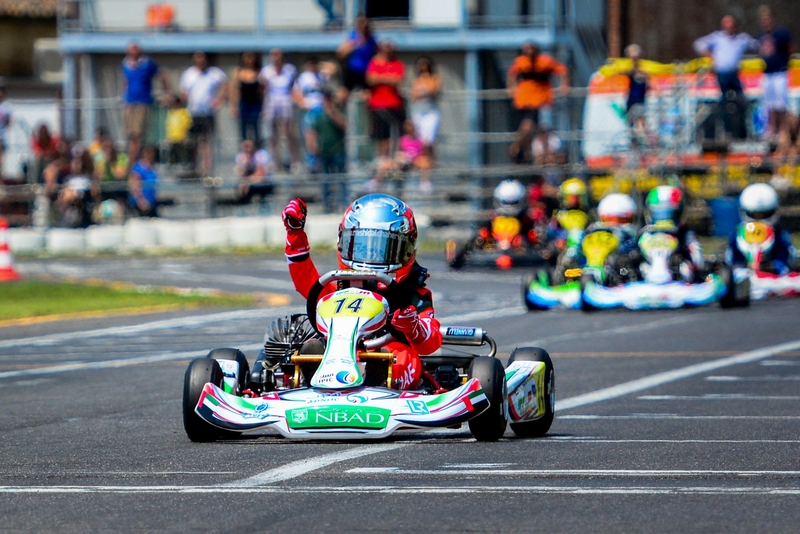 Impressive showing on final day rewarded with maiden victory in Parolin Championship
Rashid Al Dhaheri continues to etch his name in UAE motorsport history as he became the youngest ever Emirati to win an officially sanctioned kart race on the international stage as he claimed a well deserved victory in the Parolin Championship held in Siena, Italy on the weekend of 20-21 June 2015.

The seven year old Abu Dhabi schoolboy was in fine form at the Pista Internazionale di Siena, near Firenze and signalled his intent with a strong showing in qualifying where he claimed pole position.

The youngest driver in the field of boys up to 10 years of age, he then did the business in the Pre-Final, winning with a display of consistency and speed which ensured he would start the final from the front row.

In the Final race on the first day, Al Dhaheri was third into the first turn but contact early on saw him drop down to tenth with four laps to go. This failed to demoralise him, and instead spurred him on to fight back to finish sixth, setting the fastest lap in the process.

On day two, Sunday, it was a deja-vu as again the UAE’s ‘Little Alonso’ secured pole position for the Pre-Final which he won with a controlled performance and set himself up with a front row start for the Final.

This time around Al Dhaheri was in a pack of eight drivers slugging for the lead – all separated by less than two seconds. He slotted into second place in the early stages. He attacked early on by using the slipstream of the leader, managed to edge ahead and set the pace until the chequered flag dropped.

He thus scored his first victory in the Parolin Championship featuring some of Italy’s finest young drivers, and doing justice to those who believed in his talent and allowed him to move up to a higher category.

Team manager Fausto Ippoliti: “Overall lots of experience gained by Rashid this weekend on track. Again the use of telemetry was useful, but he also showed that using his head, keeping cool under duress and resisting the pressure from the big boys all helps get to the top step of the podium.”

“It was a tough weekend of on track battles but the reward is that Rashid now lies fifth in the championship, which is a great performance considering he is the youngest kid in the field who joined the series late and thus missed out on the opening round. Nevertheless we tackle the two remaining rounds of the summer with optimism,” concluded Ippoliti.

Marco Parolin marketing manager of Parolin: “In my opinion Rashid has been very smooth and attentive so far. It was a double-race weekend that required an important effort, and he was able to maintain the concentration throughout all the weekend and this is notable from a seven years old kid.”