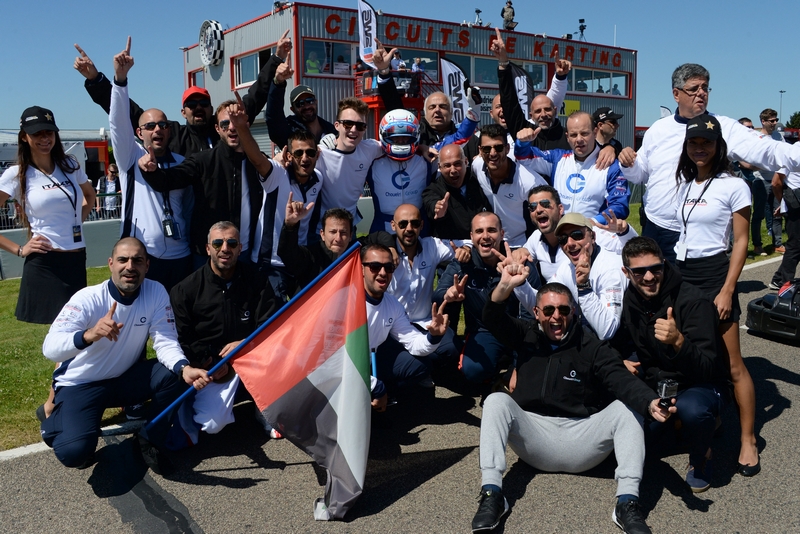 CG Racing Pro powered to third place in the 2015 SWS Endurance Grand Finals, at RKC track near Paris, in what proved to be a tight contest between the top endurance karting teams from around the globe.

Having finished second in the 2014 edition of the SWS Grand Finals, the Dubai based team were targeting the top step of the podium this tome around.

And although they came close, it was the Italian outfit Pastino Veneto Corse which took top honours in the 12 hours finale. With Modave Racing PPS, from Belgian, stalking them all the way to the flag and finishing second a mere 15.9 seconds adrift, with CG Racing not far behind in third after a strong showing by their drivers David Terrien, Piers Pakenham-Walsh and Rami Azzam.

It was a tough contest from the start, a pre-race thunderstorm adding to the drama and challenge. From the green lights CG Racing Pro were constantly at the sharp end of proceedings. With less than hour to go they seemed destined for fourth and missing out on the podium.

But a huge effort by Terrien during his final stint saw him claw his way past Batelco and snatch third place in the final half hour of the race.

CG Racing team principal Pierre Choueri said afterwards: “Third place is a fantastic achievement for our team. This year the standard of the field was the highest it has ever been at the SWS Grand Finals, so for us we are happy and I am proud of the teams.”

Batelco, who have in the past been constant front-runners at Dubai Kartdrome, finished fourth ahead of BG Racing from France, CER ASK Karting in fifth, Team Swiss Pro in seventh, Alfa Romeo Team and JPS Racing eighth and ninth, with DRGM rounding out the top ten.

CG Racing 1 finished 21st out of the forty teams that took to the start, while the third UAE team in the field F3 Racing arrived in France quietly confident of a strong showing, but they had to settle for 18th place.

Team manager Luigi Gariano summed up his team’s race: “In practice we were among the top five all the time, but in the race we could not replicate this form, but that’s racing and of course the level of the field was extremely high. But to the winners and CG Racing Pro congratulations.”

The 2015 SWS Grand Finals in Paris was the culmination of world-wide contest that ran throughout the 2014 season, with the top teams from the 15 participating nations qualifying for the honour of racing at the annual event.