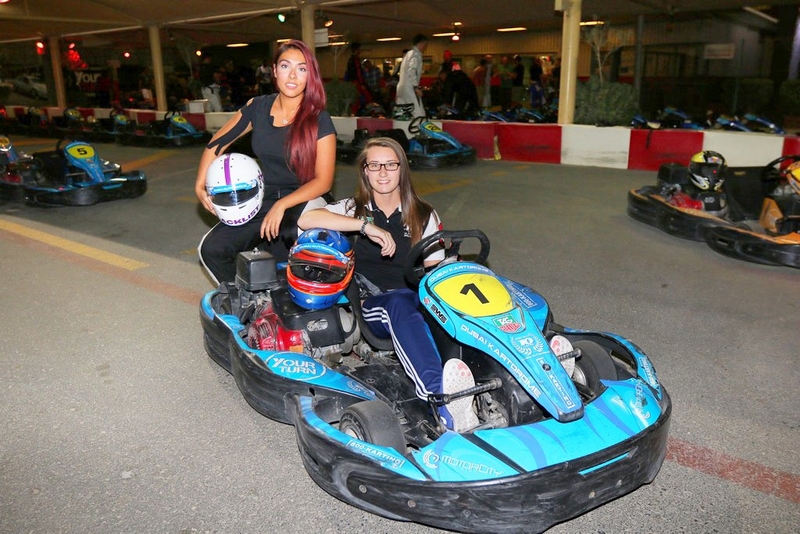 May has been a good month for female karting in the UAE, as two Dubai based ladies have topped the Sodi World Series (SWS) international ranking for the first time since the inception of the series almost a decade ago.

The two are regular competitors in the male dominated SWS Sprint series at the Kartdrome, but nevertheless front runners in just about every outing at Dubai’s popular karting venue.

Birch is a 17 year old from Regent International School, who started karting at the end of 2013 and has rapidly made her mark in SWS and on the UAE Rotax Max karting scene, impressing enough to attract backing from TAG Heuer.

She spoke of how her karting ‘career’ evolved, “It seemed extremely fun, my dad persuaded me to take part in an Arrive & Drive session at Dubai Kartdrome with him. My first time was really slow, however, I become very interested in learning the lines and became fast quickly.”

30 year old Khan, who started karting in 2013, admits, “I love adrenaline sports, anything that gets the blood racing (pun intended) and karting does that for me. It challenges me every time I am out on track, mentally and physically.”

In most sports (tennis, golf, football etc) males and females do not compete together, but not so in motorsport and thus the obvious question to the lady racers is: how is it to compete against men in a challenging sport such as karting?

Birch replied, “I don’t think it’s hard being a women in SWS. The karting community in Dubai and globally have made it really easy for women to participate. There is no drawbacks to being a women in motorsport. The fastest driver wins whether male or female.”

“As soon as I get out the kart the other male drivers come to talk to me about how I can improve, they show me the better lines to take to become quicker. They are generally very helpful,” added the teenager.

“Some of the boys do not like being beaten by girls, but the majority were very supportive and helpful. Now I am just another competitor and I think that is a sign of mutual respect,” she explained.

Kartdrome statistics show that more and more women are partaking in Arrive & Drive karting sessions, which suggests that in the future there will be more women competing on track in the SWS and other karting series.

Khan urges other lady racers to follow her example, “Do it! The SWS karting community in Dubai is a diverse group of individuals from all sorts of backgrounds, but they have a common passion in karting. Most are more than happy to share their knowledge with newcomers, male or female. Most of all it’s fun and not many competitive sports are like that.

Birch echoed Khan’s sentiments, “It is a great sport and a friendly community. I can definitely speak for Dubai Kartdrome and I’m sure many other tracks are the same. Don’t be afraid because you are female, that must not stop you participating in a sport you love.”

Kartdrome manager Ryan Trutch said, “Increasingly we are seeing women drivers participating in leisure karting sessions at our venue, and inevitably they will be attracted to serious competition. Nadia and Abi are good examples of how women can compete on equal terms with men, in a sport that is very demanding.”