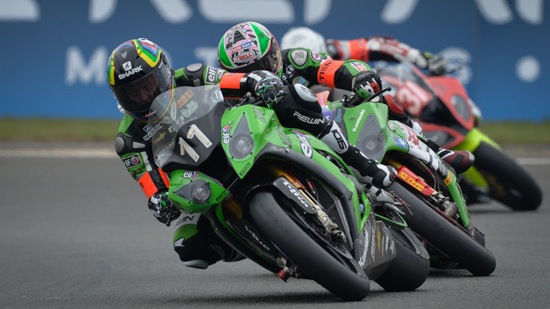 Fri 17th April 2015 – Despite the incredible performances by the work Monster Energy YART Yamaha riders on n°7 (track record), the SRC Kawasaki team held on to a tiny advantage during the second qualifying session and clinched pole position for the 38th 24 Heures Motos.

Today, Friday, clement weather greeted the riders when they rolled out for the second part of qualifying for the 38th 24 Heures Motos. Each one had another 20 minutes in which to go faster.

The main riposte of the rivals to the Kawasaki works team, which had clinched provisional pole the previous evening, came from the Monster Energy YART squad Yamaha. On the n°7 Yamaha, Max Neukirchner, a former winner, Ivan Silva and Sheridan Morais improved their previous evening’s times by a considerable margin.

Morais shattered the record for the current Bugatti circuit for an endurance bike in 1m36.578sec (av. speed:156,90 km/h).

But it wasn’t enough to knock the no. 11 Kawasaki off pole as Grégory Leblanc also went much quicker enabling his team, 4-time winner of the race between 2010 and 2013 and pole setter in 2014, to hold on to the top spot with 14/1000sec in hand thanks to the average time set by its three riders!

Behind these two teams who went at it hammer and tongs for pole came the no. 111 works Honda and the no. 30 Suzuki in the same second. The riders of the other two works machines, the no. 13 BMW and the reigning world champion the no. 94 Yamaha, were also on the pace.

All the front-runners in the blue-riband category, the EWC, are present at this spring meeting that kicks off the endurance racing season, and tomorrow at 15h00 they will join battle in sunny weather.

South African Sheridan Morais, one of the three Yart riders, will go down in history for setting the track record for an endurance bike in 1m36.578sec on the 50th anniversary of the Bugatti circuit. The previous record (1m36.826sec) by Julien Da Costa on a Kawasaki dated from 2012.

In Superstock, after the times set by the previous evening by Julien Enjolras and Cédric Tangre on the n°4 Tati Team Beaujolais Racing Kawasaki, which dominated the category in the different sessions, Michael Savary, the third rider upped his pace. With a lap in 1m39.446sec he helped his team to overtake the no. 72 Suzuki (Junior Team Le Mans Sud) and the no. 95 Kawasaki (Qatar Endurance Racing Team).

The new no. 45 Metiss confirmed its Thursday performance and ended up in 28th place overall thanks to an average time of 1m41.582sec. The Slider Endurance squad which has entered the no. 119 GECO achieved its first aim by qualifying in 52nd spot.

The 56 bikes in the 24 Heures Motos will take part in the warm-up tomorrow morning (10 h 30 to 11 h 15). Then from 11 h 30 to 12 h 15 the second round of the World Sidecar Championship will keep the crowd entertained.
The riders in the 24 Heures Motos will go out for their reconnaissance laps at 13 h 45 before the grid procedure followed by the countdown to the start beginning at 14 h 45.

This will be followed by one of the two most thrilling moments of the 38th 24 Heures Motos as the 56 bikes roar away from the start under the ovations of the public at 15 h 00 local time. Everybody champing at the bit waiting for the first round of the 2015 FIM World Endurance Championship, which has never looked so indecisive!