24h Moto: Le Mans 24h flags off the first round of the FIM World Endurance Championship 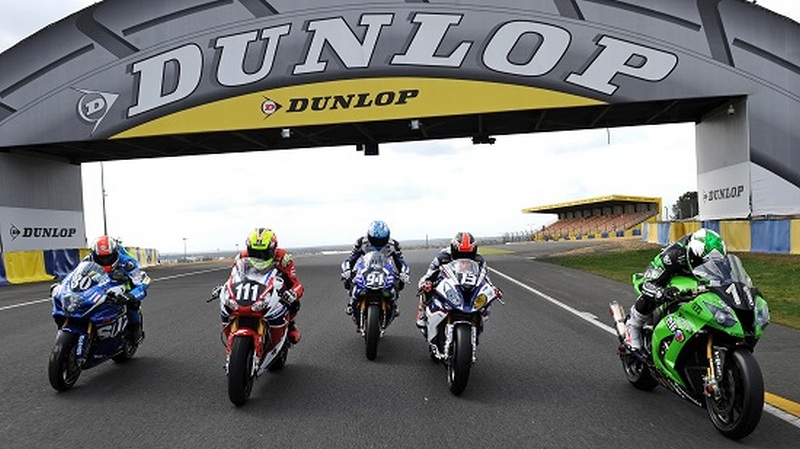 Thurs Apr 16th 2015 – In blazing sunlight in Le Sarthe, France, the final preparations are under way for the 38th 24 Heures Motos. The start of the first round of the FIM World Endurance Championship will be in two days on Saturday 18th April at 15h00. Today the riders will take to the track for the first official practice sessions.

Yesterday morning, Wednesday, scrutineering and administrative checks began for the 59 crews entered and continued throughout the day.

In the late afternoon all the riders got together for the traditional briefing with race control after which they enjoyed a friendly drink.
Tomorrow at 17h00 the bikes will be unleashed for the first qualifying sessions before nighttime practice, which will continue until 22 h 30.
On Friday the final qualification sessions (11 h 20 to 13 h 10) will decide the 56 crews who will be on the grid for the 38th 24 Heures Motos.
From a sporting point of view making any predictions for the opening round of the 2015 championship is a risky business, made all the more exciting what’s at stake. Victorious in 2014, the Suzuki Endurance Racing Team is determined to score its second win on the bounce especially as this works team is celebrating its 35th birthday and the 30th anniversary of the GSX-R family. But its current machine is starting to show signs of age. Philippe and Delhalle backed up by Etienne Masson are still confident about its potential and know they can rely on a tried and tested team.

Yamaha faces a different situation. The two works teams (GMT 94, the reigning world champion, and Monster Energy Yart) both have the new very promising R1. However, a question mark hangs over its reliability in the toughest round in the world championship.
Kawasaki was not very happy about missing out on a fifth consecutive victory at Le Mans last year. The Japanese make is out for revenge with the same three very quick and experienced riders, Leblanc, Lagrive and Foret, on an ZX-10R that’s as fast as ever.
Honda Racing spent 2014 fine-tuning its CBR 1000 RR and will be at the start with a quick, fully-sorted bike ridden by three former world endurance champions: Gimbert, Da Costa and F. Foray. This could be the year the Japanese make clinches victory in the Sarthe.
In 2014, Honda made their official comeback and this year it’s BMW’s turn with the experienced German squad, Penz13.com. The S100RR won the open category in 2014 and it caused a major upset by appearing at the top of the time sheets. This very powerful bike will be a redoubtable rival and could be the German make’s lethal weapon in its bid to win Le Mans. But last weekend BMW suffered a setback with the injury to the young and talented Belgian Bastien Mackel, who has withdrawn. He will be replaced by Australian Gareth Jones to back up Reiterberger and Vallcaneras.

These works teams will have to keep a weather eye out for the very competitive private squads in the EWC, the blue riband category: Honda National Motos, Kawasaki Bolliger and the Motor Events and R2CL Suzukis.

In the Superstock class, everybody will be out to beat the Junior Team Le Mans Sud Suzuki, the reigning world champion. The team is as quick as ever and is well capable of taking the fight to the EWCs. Guittet, Black and Maître will have to watch out for the Qatar Endurance Racing Team Kawasaki (winner of the 2014 24 Heures Motos), as well as the riders of the Traqueur Louit Moto team, Tati Team and Team Sarrazin. Other tough competitors will be the Suzuki AM Moto Racing, Atomic Moto Virus and Starteam PAM-Racing Suzukis, the Viltaïs Experience Yamaha, the RAC 41 Hondas as well of the one ridden by TT Trophy stars, McGuiness, Cummins and Stewart on the Jackson Racing team bike.

There are four motorbikes in the Open category in which Ducati and Suzuki will do battle with the fearsome Métisse as well as the eagerly-awaited revolutionary Geco, which will make its racing debut.

There is also a 100 percent women riders’ international line-up consisting of Takasugi from Japan, Wahnam from France and Kratasnik from Slovakia on the no. 10 Suzuki entered by the Amazon Fire Team.

Tomorrow they will all invade the track and the final outcome will be decided on Sunday 19th April at 15h00 after what promises to be a sunny weekend full of excitement, fun and festivities.