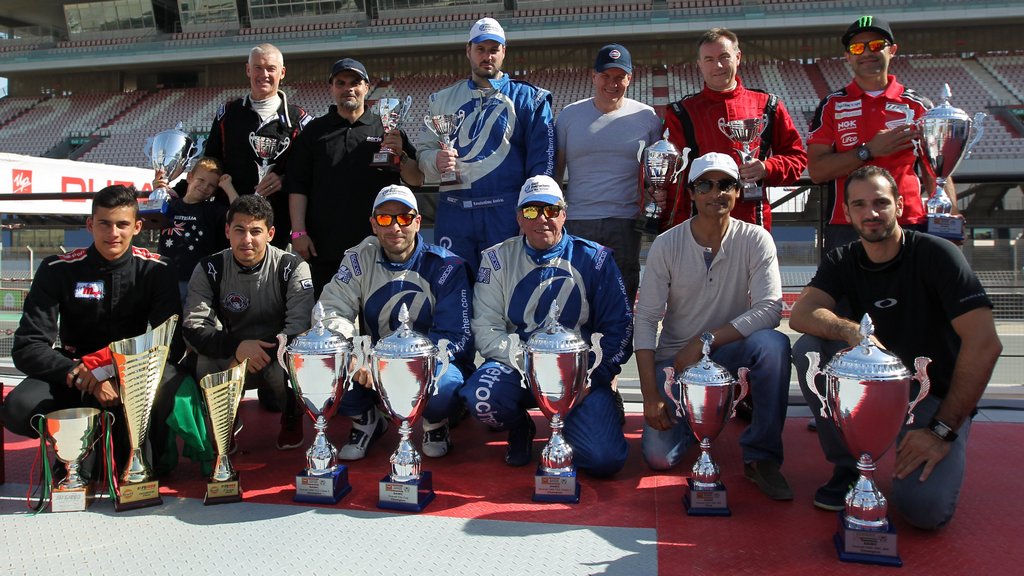 3rd April 2015- Dubai Autodrome hosted the final round s of the season for NGK Racing Series including UAE Clio Cup and Formula Gulf 1000 with champions being crowned at the end of the day.

In the wake of the big sandstorm on Thursday which engulfed Dubai, it was deemed that the track was unsuitable for the final two UAE Sportbike sprint races to take place and as a result were cancelled.

In the NGK Racing Series sprint races Leon Price claimed two comfortable wins at the wheel of the Dragon Racing Ferrari to end the team’s season on a high before they embark on their European racing campaign this summer.

Next best in both races was Costas Papantonis who along with Alex Annivas have made it a clean sweep of titles for the Gulf Petrochem team, with Papantonis adding another Class 1 title to his collection. Annivas topped Class 2 and with it the championship-within-a-championship UAE Clio Cup.

On the final day Papantonis was second overall in both races, winning Class 1 in the process ahead of Peter England in his Opel Astra.

Papantonis summed up his season, “It was a good year of racing, I must admit it was easy, cool and relaxed season, but we kept pushing and developing the car. I am particularly happy to see my son Alex [Annivas] win two titles, very proud. We are now three seasons with Gulf Petrochem and I am glad we have been able to provide them with these championships.”

In Race 1, of the NGK Racing Series, Will Morrison won the Clio Cup race, with Annivas winning Class 2 while Meisam Taheri in his Toyota beat Mazda driver Shannon Ward in Class 6. Annivas the topped the podium in the second race of the Clio Cup, with Taheri again bagging maximum points in Class 6.

Annivas said afterwards: “Mission accomplished. We broke lap records, we had some great battles on track, we developed the car with our engineers and in the end I can only thank Gulf Petrochem for making this possible – I dedicate these championships to them. We will now take a break and soon start plotting for the next season.”

The 2014-2015 UAE Sportbike Championship was dominated by Saudi Falcons rider Abdulaziz Binladen who won nine of the ten races, only a bizarre pit infringement in round ten blemished the perfect record. Prior to the season finale, Binladen had already wrapped up the title, thus making it two in a row for the reigning champion.

Binladen said after collecting his championship winner’s trophy: “It was a good season and feels good to win the the UAE Sportbike championship again. I hope to be able to use my title to encourage others to join the series and help it grow next season.”

Next best in the championship race was Mahmoud Tannir who chased Binladen gamely all year aboard his Honda, but in the end the former champion had to settle for second best.

Thus ended the final race day of the 2014-2015 UAE road racing season at Dubai Autodrome, with national racing action set to resume at the venue in October (provisional) for the start of the new 2015-2016 UAE championships.