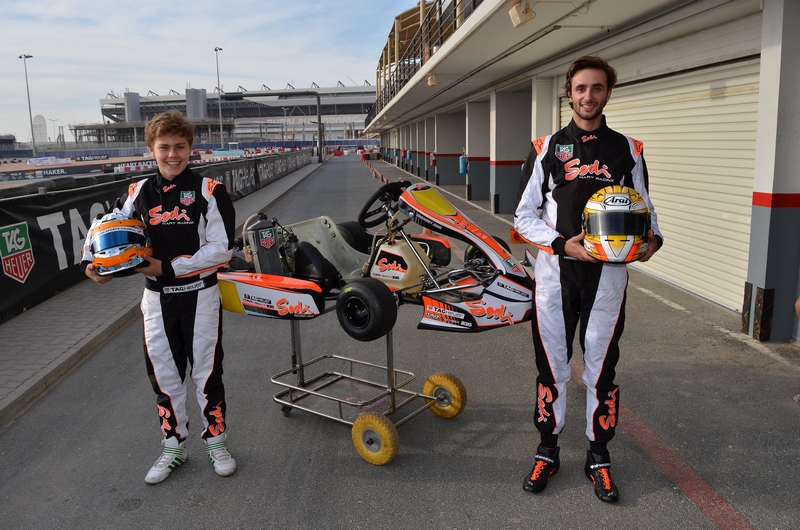 Flying the flag for the UAE in France, Taymour(L) & Luke (R) ready for the RMC Euro Challenge

With the UAE Rotax Max season coming to an end with the final race day at Al Ain Raceway on 10 April, Sodi Middle East Racing Team have announced a summer campaign for their drivers in Europe – with Taymour Kermashaschi and Luke Varley on their way for the season opening Rotax Max Euro Challenge race weekend in Sabris, France where they will be flying the UAE flag.

Varley, who is Team Manager of the Daman Speed Academy, will be donning his race suit to contest the prestigious series as a SodiKart Factory driver using a UAE race licence.

He explained, “We are going to have a go at the Euro Max Challenge with the SodiKart Factory team, and we have a very strong line-up this year. My teammate is Senior Max world champion, so we are hoping a very strong season. For me personally there is nothing better than to compare myself to the current world champion. I am excited.”

“I would like to do more training for myself, but I do get the opportunity to drive with the kidsof Daman Speed Academy when coaching. The good thing is it is hot here so I manage to do a lot of laps, and physically this is good for me,” added Varley.

Emerging as a star for the future from the UAE Rotax Max karting scene, which produced drivers of the calibre of Edward Jones and Tom Bale, is 15 year old Taymour Kermashaschi who has dominated the UAE Rotax Max junior category this season has now the opportunity to showcase his talents on the international stage.

Speaking ahead of his trip to France, for the opening round of the Rotax Max Euro Challenge, Kermashaschi said, “I am very happy to be able to participate in the Euro Max with SodiKart which starts this weekend and I am hoping to follow up my UAE season with good results in Europe as well.”

Kermashaschi does not lack motivation or confidence as he prepares for his European foray, “I always want to win, that’s always the utlimate goal for me. I am very competitive and I won’t settle for anything less than a top ten in Europe, but as I said the goal is to win.”

As an ex-patriate teenager living in the UAE, Kermashaschi is looking foward to flying the UAE flag abroad, “I have spent my whole life here in the UAE and for me it is very important that I represent this country where I live. I always back the UAE in all sports, and flying the colours of the UAE makes me very proud.”

Kermashaschi is a role model not only because of his impressive exploits on track, but his demeanour and manners are exemplary, never failing to acknowledge those who have helped him get where he is in karting, “Big thank you to my family for their continuos support, the SodiKart Team and our sponsors TAG Heuer. And of course last but not least the folks at Rotax Middle East and Al Ain Raceway who have supported me ever since I started racing. I really appreciate all there support.”

SodiKart Middle East team director Nicolas Fargeas said, “We are confident that Luke and Taymour will make our team, and the UAE karting scene proud when they contest in Europe. They are both great role models. Taymour is an example of how kids brought up in the UAE, and developed through the local karting scene, can shine through commitment and passion for what they do.”