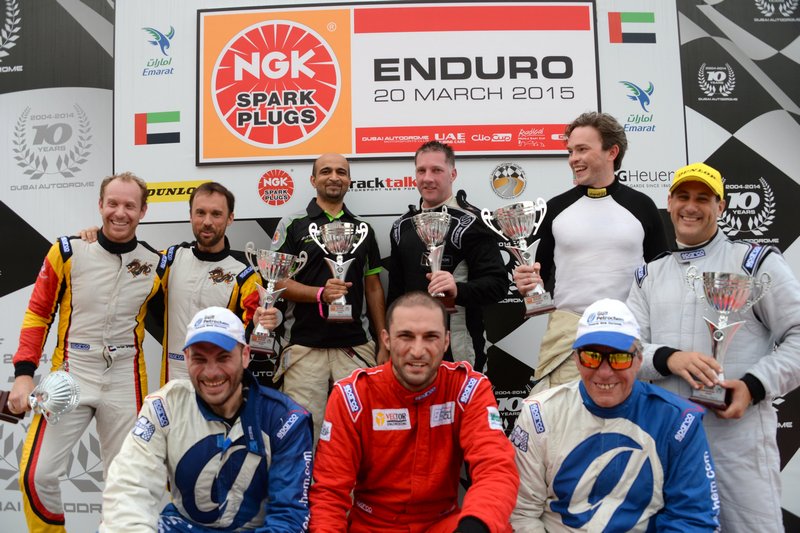 20th March 2015-Dubai Autodrome hosted the penultimate race day of the 2014-2015 UAE national motorsport season on Friday (20 March) with the NGK Enduro headlining the bill which included races for the UAE Sportbike Championship and, for the first time at the venue, Toyota TRD 86 Cup races.

Overall victory in the two hour NGK Enduro went to the formidable pairing of Rod Barff and Jordan Grogor, sharing the Dragon Racing Ferrari. Although they only qualified third, Barff got down to business from lap one, taking the lead early.

After handing over to Grogor, at the halfway point, they were in control of the race and remained in the lead until the chequered flag waved to bring an end to proceedings. Behind them there was a race long battle for second place between a trio of AUH Motorsports Radicals, pole winners Sergey Shalunov and Roman Mavlanov versus Richard Ardolino and Ollie Smith versus Ahmed Al Hammadi and Mark Jordan.

In the end Ardolino and Smith did enough to take the runner-up spot, which also gave them top honours in Class 6, ahead of Al Hammadi and Jordan in third, as the challenge from the Russian pair of Shalunov and Mavlanov faded due to gearbox problems. They settled for fourth overall.

Other class winners included: Costas Papantonis and Alex Annivas in the Gulf Petrochem SEAT who bagged the big trophy in Class 1; former UAE champions Jonathan Mullan and Umair Khan taking the spoils in Class 2 in their Honda; Meisam Taheri tops in Class 5 at the wheel of his Toyota 86.

Grogor said afterwards, “It was tough out there because over the past two days the heat has returned to Dubai, but once again Dragon Racing provided Rob and I with a great car. We simply had to stay focused and the victory came to us. Winning is always great and winning the NGK Enduro is a cool race to add to our team’s list of achievements.”

Saudi Falcon Kawasaki rider Abdulaziz Binladen looked set to win both UAE Sportbike Championship races on the day but things did not go according to plan. He dominated the first race in fine style, finishing ahead of Yamaha rider Ionel Pascota by 18.641 seconds. Mahmoud Tannir was third on his Honda.

Binladen again dominated race two, but confusion on the final lap saw him fall foul of the race stewards and was excluded from race for ignoring a red flag at the pit lane exit. This promoted Tannir to race two winner, with Pascota second and rookie Tomas Garcia third overall in his debut race at Dubai Autodrome.

Garcia was one of two rookies competing on the day along with Dennis Bech. They shared a Rookie Cup win apiece with Bech doing the business in race one and Garcia on the top step of the podium in race two.

On the race day bill for the first time at Dubai Autodrome was the Toyota TRD 86 Cup where veteran Karim Al Azhari won both races, while Meisam Taheri chased hard all day to bag two runner-up trophies for his efforts.

During the lunch break over 400 Harley Davidson riders descended on Dubai Autodrome to do a lap of honour as part of the 2015 Autism Awareness ride held under the auspices of the Autism Trust Foundation.

The final race day of the 2014-2015 UAE national motorsport championship season takes place at the Autodrome on Friday, 3 April.