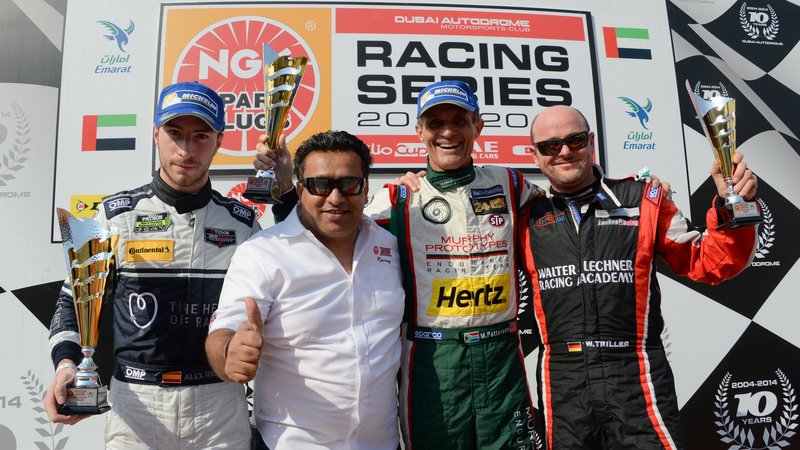 27 February 2015 –The NGK Racing Series boasted one of the biggest and strongest fields, in recent seasons, and as a result produced close racing on an action packed day at Dubai Autodrome, on Friday.

With Dragon Racing entering a record amount of cars, including several McLaren’s and Ferrari’s, it was no surprise that USA based South African Mark Patterson in the Dragon Racing Ferrari took top honours after an intriguing duel with Alex Riberas in the Lechner Racing entered Porsche.

With both lapping in the 2:02 zone there was little to separate the pair during the 10 lap sprint race on the challenging Grand Prix configuration of the Autodrome, but in the end Patterson did the business to claim victory by 3.666 seconds over Riberas.

Wolfgang Triller, also in a Lechner Racing Porsche, was third ahead of Dragon Racing Ferrari trio of Leon Price in fourth, Tanni Hanna fifth and Quentin Wahl rounding out the top six – Hanna did enough to take top honours in Class 4.

Peter England won Class 1 in a Vauxhaul, with BMW driver Peter Valek second after perennial winner in the class Costas Papantonis spun out of proceedings early in the race in the Gulf Petrochem SEAT.

Alex Annivas in his Gulf Petrochem Renault claimed top spot on the Class 2 podium, which was also enough to bag him maximum points in the Clio Cup race within a race, with Meisam Taheri winning Class 6 in his Toyota.

In the UAE Sportbike race reigning champion Abdulaziz Binladen on a Kawasaki continued his winning streak in the 600 Class by powering to a convincing victory over Yamaha mounted Vladimir Ivanov and Honda rider Mahmoud Tannir in third.

Steve Blackney won the invitational 1000 Class aboard his KTM, with Wesley Pearce second on a Ducati.

The Radical Middle East Cup, 20 laps mini-enduro was won by Sameh Al Qubaisi and Tarek Elgammal, ahead of Sergey Shalunov in second and third going to Ludo Loffreda and Romain Lutter.

Saturday will feature races of for each of the series’, with action starting at 13:30 pm. On the day there will be free entry for spectators who will have easy access to grandstands and a paddock packed with off-track entertainment.