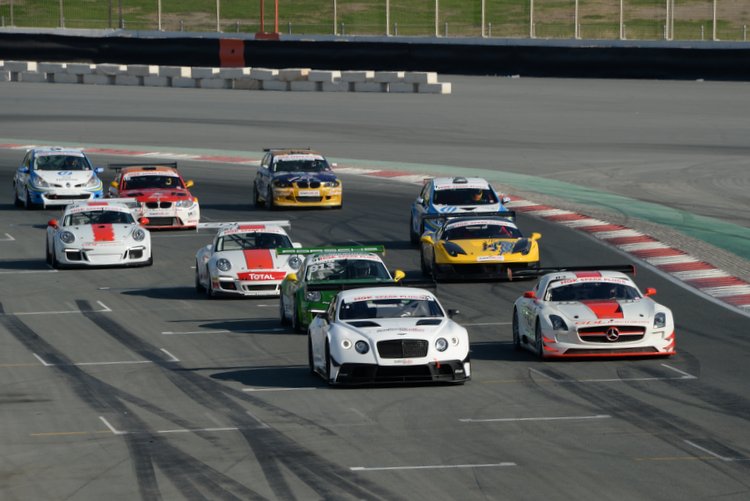 A highly competitive front row of GT3 machines stole the show in the UAE touring cars grid, joining in preparation for the upcoming Gulf 12hrs in a weeks time.

DUBAI, 5 DECEMBER 2014: On Friday Dubai Autodrome hosted the first two days of UAE national championship race weekend featuring NGK Racing Series and UAE Sportbikes races, along with Round 2 of the Porsche GT3 Cup Challenge Middle East and the opening round of the Radical Middle East Cup.

Emirati driver Saeed Al Mehairi, a graduate of Dubai Autodrome’s racing academy, scored a famous home win in the Porsche GT3 Cup Challenge Middle East, driving the Sky Dive Dubai backed Porsche after fending off reigning champion Zaid Ashkanani who finished second. He was followed across the finish line by, another local hero and Autodrome academy graduate, Sheikh Hasher Al Maktoum – making it two Sky Dive Dubai drivers on the podium and with it claiming the team prize for the day. Delighted and emotional, Al Mehairi said: “To win this race on my home track, in my home city Dubai is amazing feeling. I am really happy and thank my team Sky Dive Dubai for their efforts, because this was a team effort. Last year I said I wanted to win this race in my home town, so this is a dream come true.”

The NGK Racing Series was a battle of the legendary marques with Ferrari, McLaren, Porsche, Mercedes and Bentley slugging it out for the top step of the podium. In the end Bentley driver Michael Ammermueller took a comfortable victory in the Lechner Racing run Bentley, ahead of second placed Lim Keong Liam in a Mercedes and Wolfgang Triller in a Porsche crossing the finish line third.

Costas Papantonis won Class 1 in the Gulf Petrochem SEAT Super Copa, with teammate Alex Annivas winning Class 2 in his Renault and with it maximum points in Clio Cup race within a race.

In the Formula Gulf 1000 race, the region’s young guns battled it out with Tejas Hirani emerging the winner in a closely contested race, winning by the narrowest of margins, ahead of Edi Haxhiu in second and Ahmed Al Ghanim third – a mere second separating the top three.

Racing continues on day two (Saturday, 6 December) at the Autodrome, with qualifying in the morning, followed by five races for the five different series’ on the day. The first race for UAE Sportbikes is scheduled to start at 13:30 pm and final race of the day, for Porsche GT3 Cup Challenge Middle East, set to be flagged off at 16:20 pm.

Entry is free for all with access to the main grandstand, the Bowl viewing area and the paddock. DUBAI, 6 DECEMBER 2014: Clemens Schmid made up for the disappointment of a first corner incident in Race 1, 24 hours earlier, to bag the winner’s trophy in the Porsche GT3 Cup Challenge Middle East on Saturday at Dubai Autodrome, the second and final day of the UAE national race weekend at the venue.
Schmid made a good start from second on the grid, taking an early lead from reigning champion Zaid Ashkanani who started from pole position, but was slow off the line. Thereafter the pair spent the entire race nose to tail, with Ashkanani stalking Schmid all the way to the chequered flag, waiting for a mistake or slight opportunity that never came.
It was a faultless display by Schmid and his third victory in four races so far this season, while Ashkanani will go home with two second place trophies for his efforts at the Autodrome over the two days..
Local hero Sheikh Hasher Al Maktoum finished third after starting fifth on the grid in the Sky Dive Dubai Falcons car. He managed to break from the pack early on and chased the top two all the way to the flag. He goes home with two third place trophies for his weekend’s graft.
Teammate Saeed Al Mehairi was fifth, after winning a day earlier on his home track, and making it a strong weekend for the Dubai based outfit. Splitting the Sky Dive duo was Charlie Frijns in fourth. After dominating the NGK Racing Series Race 1 on Friday, Bentley driver Michael Ammermueller looked set to do a repeat performance in Race 2. He qualified in pole position and took an early lead, but a start infringement earned him a drive through penalty which gave Mercedes driver Lim Keong Lam the break he needed to take victory. Ammermuller was second but nevertheless won Class 6, with Wolfgang Triller third in a Porsche.
Frederic Fatien finished fourth overall, claiming Class 4 honours in the Dragon Racing Ferrari. Gulf Petrochem SEAT driver Costas Papantonis made it two from two during the course of the weekend, with victory in Class 1, as did teammate Alexandros Annivas, in his Renault clio, winning Class 2 and with it the bagging maximum Clio Cup points.
Romain Lutter and Ludo Loffreda powered to victory in the Radical Middle East Cup 45 minutes enduro race under the Lucco Racing banner, finishing ahead Amro Al Hammad and Ollie Smith in the Alpha Shell Qatar Racing entry in second place, with third going to the Abu Dhabi Racing pair of Sameh Al Qubaisi and Tarek Elgammal.