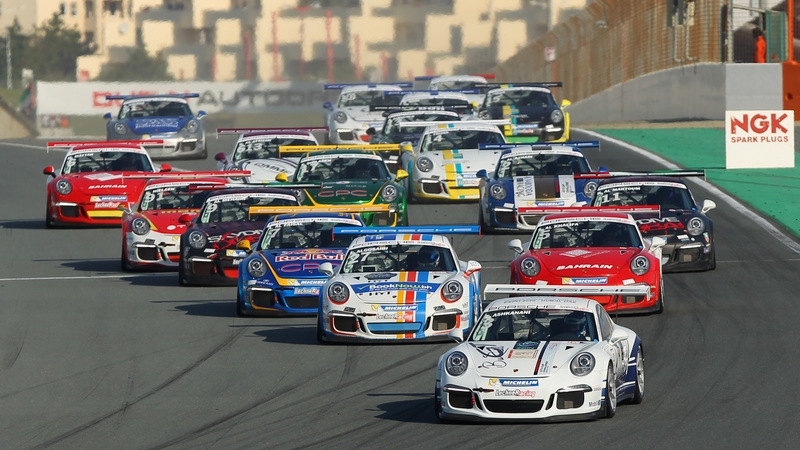 Over the two days the venue will host the second round of Porsche GT3 Cup Challenge Middle East, the first held last month in Bahrain, featuring the region’s top drivers along with international hot shots going wheel-to-wheel in the premier racing series in the Middle East.

Two UAE teams – Sky Dive Dubai Falcons Racing Team and Al Nabooda Racing – will give local fans something to cheer for and such is the form of their drivers that both teams are likely to feature prominently at the sharp end of proceedings during the course of the two days.

The NGK Racing Series receives a major entry boost with teams using this round, on the Grand Prix configuration of Dubai Autodrome, as a test session ahead of the Hankook Dubai 24 Hours which takes place at the Autodrome in early January.

As a result fans will be able to witness the big names of GT racing do battle on both days. Legendary marques such as Ferrari, Mercedes, Porsche and McLaren will be out to claim top honours. Also adding spice to the mix – for the first time competing in the Middle East – will be the Lechner Racing Bentley Continental GT3 – ingredients which set the stage for a classic confrontation. In along with the GT3 cars will be the regular entries for UAE Touring Cars, including Clio Cup.

With 30 drivers from 12 different countries in a field of 16 cars, this weekend’s opening round of the Radical Middle East Cup is set to provide some exciting and close racing. The series features a mix of pro, semi-pro and amateur drivers in a mini-endurance race format.

Some established Radical drivers will be returning to the series this season including last year’s Radical Middle East Champion Amro Al Hamad who will be eager to defend his title. The stage is set for an intriguing challenge for drivers and teams, where anything can happen and often does…

Also on the bill are two Formula Gulf 1000 races where young talent take on the ‘masters’ in this unique Dubai based single-seater series, along with two rounds of the UAE Sportbikes Championship where the two wheel brigade slug it out for top honours.

Action starts with Radical qualifying at 09:40 am on Friday. There will be five races for the five different series’ on the day., with the first race scheduled to start at 13:35 pm and final race of the day, for Porsche GT3 Cup Challenge Middle East, set to be flagged off at 16:30 pm. A similar schedule of races will take place on Saturday.

The Autodrome paddock will be buzzing with a number of family friendly activities, including easy access to team garages where fans can get up close to the cars and motorcycles, and also be able to interact with drivers, riders and teams in what has been described as ‘the most user friendly race track in the region’ by fans and competitors alike.

Food and beverage stalls along with a number of entertainment areas featuring bungee jumping, kids areas and simulators provide added value for those attending. Entry is free for all including access to the main grandstand, the Bowl viewing area and the paddock.