Dubai: Final round of karting Endurance Championship 24 hrs this weekend 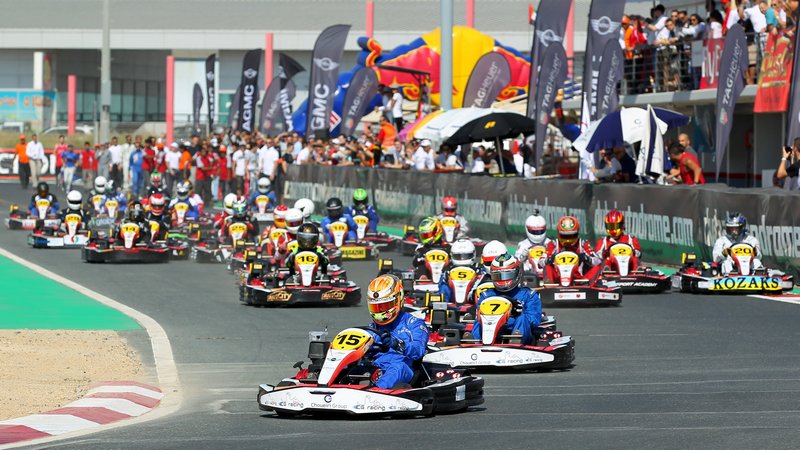 Dubai, 25 Nov 2014: Dubai Autodrome will be buzzing with runners and race drivers this weekend with the Kartdrome hosting the traditional year end 24 hours karting race – the final round of the 2014 Endurance Championship driven by Mini – which will be flagged off at 12:00 noon on Friday, while across the boulevard on Saturday morning over 12,000 participants will take part in the second edition of The Color Run.

The final round of the 2014 Kartdrome Endurance Championship driven by Mini this weekend (Friday and Saturday, 28 and 29 November) has developed into a battle of champions with the title holders CG Racing Pro and triple champions Batelco battling it out for the top honours in the four round series. Batelco, who won the first three rounds, lead the standings by 15 points which means that CG Racing Pro need to win the race and then hope that the championship leaders falter and do not finish any higher than fifth place. It’s a tough ask but anything can happen in motor racing, and often does…Throw into this year’s mix a host of top international teams all capable of surprising the establishment, and a posse of local squads more than capable of challenging the hierarchy on the day.Of the international brigade, the ones to watch include: Forza Karting and Forza Union Russia, Germany’s Micro Machines, Austrian SBLHS Endurance Team and Puntonas made up of various top international drivers from different countries.The ‘usual suspects’ from the UAE will be out in force and targeting the podium, including the likes of: Dubai-5, Dubai Falcon Racing Team, Globcom, Mach1-Blacklist, Speedsters Motorheads, Team Kart Excellence and Timeless Events – thirty teams will be on the grid for the start.Also to be decided on the day will be champions of the Corporate Category and the Nations Cup. Here CG Racing again are in with a shot of bagging both these titles.CG Racing 1 lead the Corporate standings by 13 points from Team Emirates, while in the Nations Cup standings they trail Dubai-5 by only five points. Both the titles will be decided at the season finale.CG Racing team manager Habib Chouery is confident but realistic about the chances of his three teams in the competition, he said ahead of the weekend, “Our aim is to finish on the podium in all three categories, and preferably the top step. Winning three titles as we did last year will be tough but our boys are well prepared and ready for the challenge.”“In the Pro category we need help from others and in all honesty our chance of outscoring Batelco and beat them in this championship is a huge challenge, nevertheless we aim to beat them this weekend in the race. As for the Corporate and Nations categories, I am confident we will do the business and take both titles. But as they say in racing anything can happen,” concluded Chouery whose team made history by claiming all three titles in the 2013 Kartdrome Endurance Championship driven by Mini.Batelco meanwhile have been untouchable all year – having won all three rounds of the championship thus far – and team manager Osama Al Saad is confident that they will return home to Bahrain with the champions’ trophy.He said after watching his team win round three in October, “We go to the final round with a good chance of taking the title because we have a good points advantage. But our team Batelco do not like to finish second, and even though we need only finish in the top four or five, we are going all out for the win and do it in style.”Hence the scene is set for a showdown for not only the 2014 title but also top honours in what is one of the most prestigious endurance races in the world of leisure karting.Kartdrome manager Ryan Trutch said, “We are geared up for what is our flagship endurance event at the Kartdrome, and are expecting a big battle in all classes, as all three titles will be decided when the chequered flag waves on Saturday.”“We also have a strong international contingent, with some big name drivers in action at our venue, proof that the Kartdrome 24 hours is now recognised as a major event on the global leisure karting calendar,” added Trutch.The race will be flagged off, Le Mans style, at 12:00 noon on Friday and will run through until 12:00 noon on Saturday when the chequered flag will wave to bring proceedings to an end. This will be followed by the podium presentation for the race and thereafter the championship prize-giving.