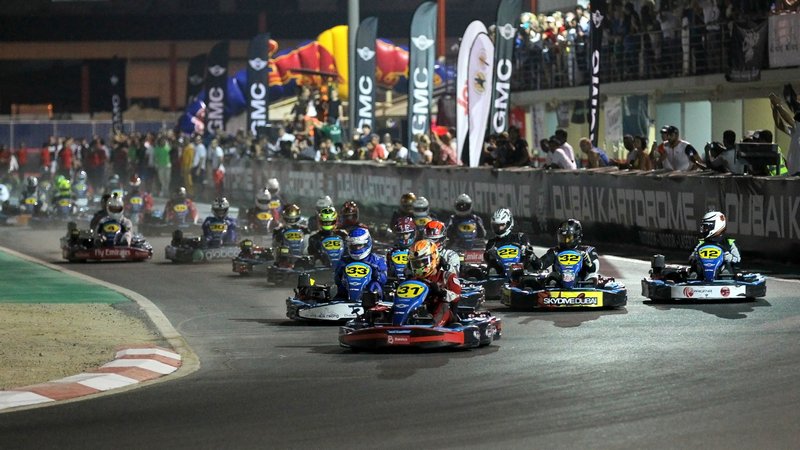 18 October 2014-Batelco won a thrilling race when they triumphed at the Dubai Kartdrome 700 Kilometre race on Saturday, taking the lead late on in proceedings and thereafter powering to their third consecutive victory in the 2014 Endurance Championship driven by MINI, while reigning champions CG Racing Pro had to settle for second place in the overall standings, but nevertheless took home seven trophies for their efforts in the Nations Cup and Corporate Category.

On Friday evening 34 teams took to the track and immediately it was clear that a dozen of them would be podium contenders, with the championship leaders Batelco and CG Racing Pro immediately setting the pace with the likes of Mach 1, Dubai Falcon Racing, Dubai-5 and GP Racing in the mix, and incredibly the top 19 teams were within a second, suggesting a very close contest across the field.

The field were unleashed in a Le Mans style start at 9pm on Friday evening and predictably it was Batelco and CG Racing Pro who took command, swapping places at the front as they edged ahead of the chasing pack.

After the first few hours CG Racing Pro began to edge ahead and at one stage had alead of around 50 seconds from Batelco. But the Bahraini team were not done, and proceeded to reel in their rivals.

During the last hour stint of the race with Alban Varutti at the wheel, the Batelco team were a dozen seconds behind the leaders, which prompted their lead driver to dig deep and with a handful of laps to go he took the lead where he stayed to the chequered flag to claim a hard fought victory, by a mere 5.712 seconds after completing 583 laps.

Batelco team manager Ali Abbas said afterwards, “To put it simply our crew in the pit garage conceived a good strategy and our drivers responded by delivering even when the odds were stacked against us.” “Once again the event was well run, had a great atmosphere and the level of competition was extremely high, which makes winning here that more satisfying. I have to thank everyone involved, but particularly the marshals who work very hard to make this event safe and enjoyable,” added Abbas.

CG Racing Pro were second overall, ahead teammates CG Racing 1 in third which was enough to clinch top spot in the prestigious Corporate Category and first prize in the Nations Cup – all in all the ‘Blues’ scooped seven trophies for their efforts in the race and are still on target for the treble at the end of the season.

CG Racing team boss Pierre Choueiri was generous in his praise for the winning team before adding, “It was a tough race, our objective was to win all the categories, so in a way we fell short. But we still took home the seven trophies, including the Corporate win and Nations Cup victory, which is a reward for the hard work and team spirit that we have. I am very proud of this.”

“We will return for the 24 hours finale here at the Kartdrome in November and our objective will be: win, win, win!” added Choueiri.

Dubai-5 were fourth overall , ahead of CG Racing 2 in fifth who were followed by Timeless Events Racing, Speedsters Motorheads, Globacom1 Flame, Mach1 Blacklist and MINI Dubai rounding out the top ten.

Quattro Toreros Racing took home the trophy for best rookie team, and Ceylon Karters were awarded the Best Spirit award for their efforts.

Kartdrome assistant manager David Bright reflected, “It was very close out there as our hard working team at the Kartdrome delivered very evenly matched karts to the 34 teams, who in turn delivered a high standard of driving throughout the 700 kilometres.”

Victory for Batelco takes them a step closer to the 2014 Endurance Championship driven by MINI title, but still face a tough challenge from CG Racing Pro who can be counted on to recharge for the final round and come out fighting to defend their title.

Kartdrome manager Ryan Trutch summed up the weekend, “Once again we saw a very high standard of driving and racing. It was as close as it gets out there so a big congratulations to Batelco for their win. Also big applause for CG Racing who have raised the bar in this series and once again took home substantial silverware.”

“In the end the nature of this event is such that everyone who competes and finishes is a winner. We look forward to the final round in November where titles will be decided in what is the flagship event of this series which is made possible by the backing of MINI,” concluded Trutch.

The decisive final round of the series takes place at Dubai Kartdrome on 28-29 November 2014.