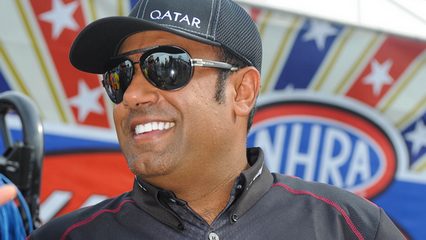 September 11, 2014, North Carolina – It’s game time; the regular season is over, and it is time for the Qatar Al-Anabi Racing Top Fuel team, the three-time and defending World Championship team owned by His Excellency Sheikh Khalid bin Hamad Al Thani, to begin defense of its 2013 World Championship. Third-year Top Fuel driver Khalid alBalooshi and defending World Champion Shawn Langdon begin their playoff run at this weekend’s seventh annual Pep Boys NHRA Carolina Nationals in Concord, North Carolina, the 19th of 24 races making up the United States’ 2014 NHRA Mello Yello Drag Racing Series and the first of six events that comprise the Countdown to the Championship NHRA Playoffs. Qualifying is set for Friday, Saturday and Sunday with eliminations scheduled for Monday. AlBalooshi enters the Playoffs as the seventh seed in the six-race playoffs, alBalooshi needs a quick start to make a move towards the top of the point standings..

AlBalooshi enters the Playoffs on the strength of his first-ever two- win Top Fuel season. As the seventh seed in the six-race playoffs, alBalooshi needs a quick start to make a move towards the top of the point standings; he and his team have the confidence to do just that. One race ago at the U.S. Nationals, alBalooshi’s gold Al-Anabi car showed impressive consistency making excellent runs in four of the five qualifying sessions and racing into the semifinals.

“I am very excited for the Countdown this year,” alBalooshi said. “Our team found some good things at the Indy test (before the U.S. Nationals), and our Al-Anabi car was very good during the Indy race. I think our car is in good shape; we are ready to start the Countdown with a good team and a good car. I am excited to get started this weekend.”

With an additional year of experience, the multi-time Pro Mod champion has his sights set on the NHRA Mello Yello Top Fuel World Championship. Is it a long shot for the seventh-seeded driver? Perhaps, but the team’s recent surge has the Dubai driver brimming with confidence.

“Our car is consistent now, alBalooshi added. “I think this is the best our car has been since I started to drive Top Fuel (in 2012). All of the years, we have been trying a lot of different stuff. Finally, we know now what our car exactly likes and what it doesn’t like. I think we are we in good shape now. Jason (crew chief Jason McCulloch) can make changes on the car and knows what it likes.

“Can we win the NHRA Championship? Why not? We have a car to run all the people. We have an almost top-five car in the show. If you look at the average for the cars in the show, our car is there with the top-five cars, so why not?”

Langdon enters the Countdown to the Championship NHRA Playoffs as the third seed; the California native has one win in five final-round appearances this season, but he, too, is confident in his race team entering the Playoffs.

“Our confidence is still high,” Langdon said. “In my opinion, the Al-Anabi team is the best out there. These guys have a great team and a great car year-after-year. It’s up to the driver to perform at the same level of excellence as the team. Even though the results haven’t shown it this year, we know that we have a car that can run with everyone else and that we’ll be in contention for the Mello Yello championship again this year.”

Langdon’s run to the 2013 NHRA Mello Yello Top Fuel World Championship was the team’s third in four years but the driver’s first. Langdon learned quickly that extensive distractions complicate the competition during the playoffs – especially as the races begin to wind down for the championship contenders. Experience gained one year ago will be substantial in Langdon’s bid to repeat.

“I experienced a lot of things for the first time last year,” Langdon said. “I had never been first in points or been in championship contention. There were a lot of things I had never experienced before like the amount of pressure being in contention for the Mello Yello championship brings with it. You have to perform at a very high level every time the car goes down the race track and be able to deal with the media attention without being distracted. After going through all of that last year, I know a little more about what to expect in the Countdown this year. Just knowing what to expect will allow me to focus a little bit more on my driving rather than the other things going on.”

Al-Anabi Racing operates out of multiple locations in both the United States and Qatar. In the United States, the Brownsburg, Ind.-based operation is a two-car NHRA Mello Yello Drag Racing Series team that is managed by Alan Johnson Racing. Sheikh Khalid’s initiative has created increased international awareness of the State of Qatar while highlighting the nation’s international sports outreach. Alan Johnson is a 15-time NHRA champion in various capacities including crew chief, team owner and team manager. For additional information on the Al-Anabi Racing Team, team manager Alan Johnson or drivers Khalid alBalooshi or Shawn Langdon, please visit www.alanabiracing.com