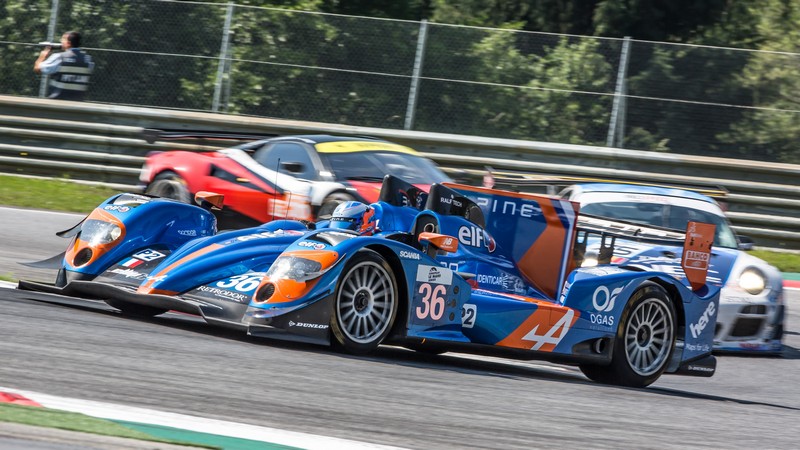 First race hour-Although a few clouds appeared during the opening laps of the 4 Hours of Red Bull Ring, it was under blazingly hot conditions, with an air temperature of 31oC, track temperature 40°C. Filipe Albuquerque (JOTA Sport) got away very well at the head of the field, while Nelson Panciatici at the wheel of the Signatech Alpine Signatech A450b gained a place by the end of the first lap to put himself behind the No.34 Race Performance ORECA 03 of Franck Mailleux. Pierre Ragues took the start at the wheel of the NewBlood by Morand Racing Morgan Judd (No.43). Pegasus Racing’s Julien Schell started things off for his team, while the two Greaves Motorsport Zytek Z11SN Nissans came into the pits for an early pit stop under the Safety Car which was caused by the No.78 BMW Z4 GTC stopping on track.

The No.28 Greaves Zytek easily made its way back through the field thanks to the performance of team newcomer, Luciano Bacheta. Mark Patterson climbed up the time sheets at the wheel of the No.41 but got held up in traffic among the 13 LMGTE and 12 GTC cars on track. By the end of the first hour the two Zyteks had both rejoined the LMP2 pack.

While JOTA Sport and Race Performance had a clear path at the head of the race, the battle for third place was in full swing between three Frenchmen, Nelson Panciatici, Pierre Thiriet and Pierre Ragues (Signatech Alpine, Thiriet by TDS Racing, NewBlood by Morand Racing). As they lapped the LMGTE and GTC cars there was barely a whisker between them. The Alpine A450b led the rush to the pits for the first round of stops shortly before the end of the first hour, followed by the No.29 Pegasus, No.38 JOTA Sport and No.46 Thiriet by TDS. The last to come in of this group was NewBlood by Morand Racing which ran out of fuel as it came onto pit lane which meant the Swiss team’s mechanics had to push the car to its pit.

The beginning of the race’s second hour was notable for the Thiriet by TDS Racing Ligier JS P2 going off track, with Ludovic Badey narrowly avoiding hitting the barriers. The car returned to its pit garage where the mechanics worked on the suspension and front brake disc problem. The JS P2 lost precious minutes but got back out on track, still in the hands of Ludovic Badey. However, the return to the race was short-lived for the Montpellier-based team as the Ligier JS P2 was forced to retire with a broken stub axle.

Meanwhile, at the head of the race, the Race Performance ORECA 03 had taken the lead with Michel Frey ahead of Simon Dolan in the No.38 JOTA Sport Zytek and the No.36 Alpine A450b in the hands of Paul-Loup Chatin. After 1h20 of the race, Simon Dolan tried – and succeeded – to regain the lead. Paul-Loup Chatin was also on a charge and managed to take second place in the standings, leaving third place to the No.34 ORECA. But the battle didn’t stop there as, on the 66th lap, Signatech took the lead as the No.38 Zytek returned to the race after making a pit stop. At the close of the second hour the Alpine A450b was ahead of its rival, JOTA Sport, 1.46 seconds. Third position was back in the hands of the No.28 Greaves Motorsport Zytek Nissan driven by Mark Shulzhitskiy, while NewBlood by Morand Racing held fourth position (Gary Hirsch). Franck Mailleux was back behind the wheel of the No.34 Race Performance (5th) and ahead of the other Greaves Zytek entry, the No.41 of Matt McMurry.

The high temperatures at the Red Bull Ring as the race moved into its third hour ensured that conditions were as demanding for the drivers as much as for their cars, but the race found its rhythm. However, there was bad news for the No.43 Morgan of NewBlood by Morand Racing who picked up a 15 second stop and go penalty for speeding in the pit lane. The Pegasus Racing Morgan Nissan was at the back of the pack after having lost 15 laps for a technical issue at the start of the race; Nicki Leutwiler has been trying to make his way back up the time sheets.

Paul-Loup Chatin continued at the head of the field in the Signatech Alpine, but by only 3.5 seconds ahead of Simon Dolan; the lap times were very tight and promised a great battle right to the end of the race. The No.28 Greaves Zytek was ensconced in third place, 46 seconds behind the leader, and Race Performance’s No.34 held fourth until the next round of pit stops for fuel and driver changes.

On the 95th lap the Signatech Alpine pitted, Paul-Loup Chatin stayed at the wheel and re-entered the race in third place. Simon Dolan regained the lead, followed by Franck Mailleux driving the Race Performance ORECA. NewBlood by Morand Racing’s woes continued, Gary Hirsch having twice cut the white line at the entry to the pits and being rewarded with a two minute penalty. On the 98th lap Briton Harry Tincknell took over from Simon Dolan in the No.38 JOTA Sport, which allowed the Alpine A450b to regain the lead.

As the race clocked up its 100th lap, Gary Hirsch took his second penalty before handing the wheel to Christian Klien who came out into sixth place in the standings, albeit now three laps behind the leader. The Austrian was fired up to claw back as much time as possible and set his fastest lap of the race (1:25.068) on lap 107.

As the end of the third hour approached, Harry Tincknell driving the No.38 Zytek gave the Signatech Alpine as hard a time as possible, with the gap being between 0.167 and 0.510 seconds (lap 114) the fight for first place was on again between the Briton and Paul-Loup Chatin. Race Performance remained in third place, still trailed closely by the No.28 Zytek of Greaves Motorsport. During the 119th and 120th laps, the passing and re-passing between Tincknell and Chatin enthralled everyone on and around the track, with little to choose between them. What a race!

The fourth and final hour of the race began with the No.38 Zytek of Harry Tincknell ahead of the No.36 Alpine of Paul-Loup Chatin. Over a few laps the Briton opened up a gap of more than four seconds. Franck Mailleux lay in wait in third place, 34 seconds behind the leader, and set the fastest lap of the race with a time of 1:24.969 (126th lap). Mark Shulzhitskiy was fourth at the wheel of the No.28 Greaves Motorsport Zytek and Christian Klien was figuring in the standings too, now up to 5th in LMP2 ahead of Tom Kimber-Smith’s Greaves entry. Jonathan Coleman, driving the No.29 Pegasus Racing Morgan Nissan was 6th but the French team had difficulties making up the delays they experienced at the start of the race. Forty minutes from the end of the race Simon Dolan took over the wheel of the No. 38 JOTA once again at the same time as Oliver Webb in the No.36 Alpine. The drivers continued to fight the fight begun by their respective teammates and, on the 132nd lap, Webb took the lead in a fantastic overtaking move and quickly created a gap of more than three seconds. Michel Frey took the wheel of the No.34 ORECA again and maintained its position in third place, ahead of the No.28 and Christian Klien’s No.43 which was still in 5th place. The No.43 Morgan Judd was given another penalty for unsportsmanlike conduct by the Swiss driver earlier in the race.

The next European Le Mans Series will be at the South of France Paul Ricard circuit on September 14th.