Dubai: Full on with the Ferret – Dwindling grids & empty pits… 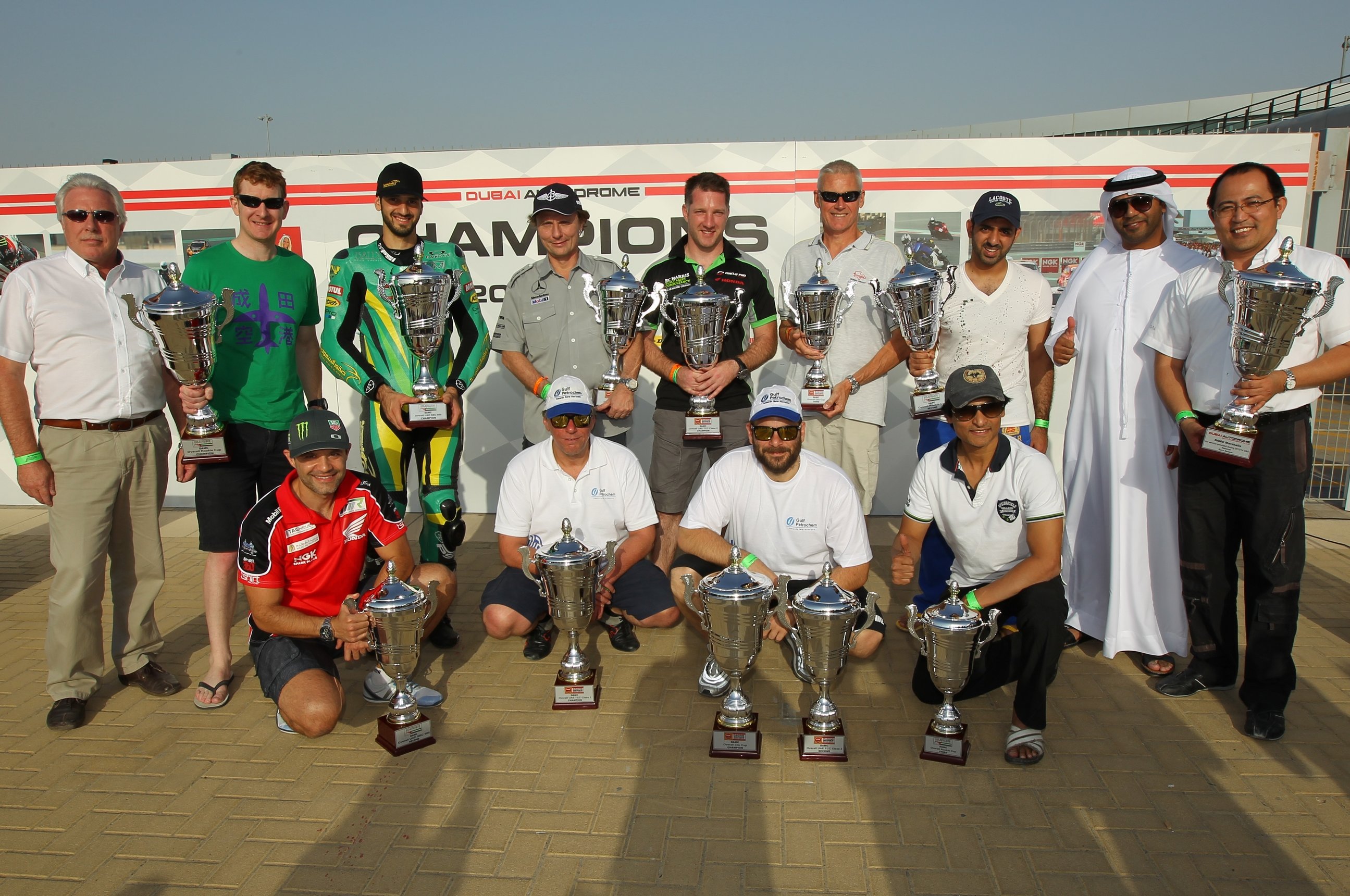 Congratulations to all the newly crowned 2013/14 season champions

Shifting in to reverse it’s time to take a look back at the 2013/2014 race season. The DAMC National Race Series normally makes an enthusiastic start with the season opener which, in recent times has been down the road at Yas Marina Circuit. Dubai Autodrome kindly allowing their long standing race series to take to the capitals circuit as a shakedown for the F1 Grand Prix. Normally the attraction of racing on the regions F1 circuit linked with the opening round of the new race season swells the grids in most classes. Unfortunately, this was not the case this year.

The UAETCC grid was noticeably empty with only nine cars out there. Fortunately the Porsche Middle East Cup cars swelled the grid to a respectable level but still, it was rather disheartening to see so few cars out there for the season opener. The same story for the Radical Cup series where they too struggled to make double figures on the grid….

The opening round at the Dubai Autodrome was also a low key affair where the Sportbike series, normally with a healthy mix of men & machines, could only muster up a dozen riders. Again the UAETCC field failed to hit double figures. These were worrying signs so early on into the season. Was it that cars and bikes were yet to be finished, drivers & riders had left Dubai and no longer able to race or, was it due to the fact that people had just run out of enthusiasm for the whole racing game?

The fact that the grids were smaller did not diminish or take anything away from the on track racing. Most weekends found small but fierce (mostly fair) bumper to bumper, fairing to fairing battles right through the grids. In the bikes, there would be a season long duel for the top step of the bike championship between Mahmoud Tannir and Abdul Aziz Binladen. The latter who had dropped back into the 600cc class after campaigning the 1000cc class last season, took the fight to ‘Moody’ who, after a jittery start managed to claw his way back into the fight…A mid-season bike change to Honda from his ageing Triumph saw him make steady improvements each time out, alas, the Saudi was too strong and consistent and took the title. The new season may bring a tougher challenge from Moody as he gets to grips with the new Honda. In the rookie class, it was more of a one horse race. Michael Collins dominated from start to finish picking up race wins in every race he started apart from round 12 which saw his first DNF (did not finish) of the whole season. I wouldn’t bet against him being on the podium next season mixing it up with the established stars… The UAETCC (Touring Car Championship) didn’t disappoint in race quality despite the small grids. Class 1 was a formality with the Gulf Petrochem Seat of Costas Papantonis again stealing the show. In the Clio Cup, the series had already been wrapped up by the popular Alex Annivas who, I can add is half the man he used to be! By that, I mean literally…The guy has undergone a transformer type transformation by shedding over 45kg in weight….Now, I know most drivers are looking at shedding weight from their cars to make them more competitive but this guy decided it was he who needed a weight reduction….All this resulted in not only a slimmer Alex but moreover, a more competitive one. The guy I used to fondly call ‘Big Hairy Guy’ could no longer be called so and now he is simply ‘Hairy Guy’ Costas Papantonis delivering the goods in the Seat once again Class 2 was only decided on the final race day. With a 3 way battle going into the final races, it was Jonathan Mullan hoping that the luck of the Irish would result in a good day for the Zettanet Honda Team. Standing in his way on the day would be Rupesh Channake also in the Honda camp and the flying Greek, Alex Annivas once again in the mighty Clio…It was down to the final race of the day which saw Mullan do enough to take the championship, which, after an up and down season was just reward for the teams efforts. Surprisingly it was Annivas in his Clio who pushed his nose in front of Channake’s Honda to steal away 2nd place in the championship. An awesome result for the diminutive little Renault and the lightweight Greek. If the grids weren’t packed, they sure did have some class when Leon Price took out the Dragon Racing 88 Ferrari & Mclaren race cars. These awesome looking cars are simple stunning to see and hear out on the circuits and, with the pit area being open and welcome to spectators, your always made welcome to pop in, chat and grab a coffee with the whole team…Top job boys! For me, the notable performance of the season was in the Formula Gulf FG1000 series where local racer Tom Bale was competing as a rookie. The series run by Barry & Martin Hope is placed as a stepping stone in to ‘real racing’ for those who are coming out of kart racing and looking to progress their race careers. Tom Bale is one such young driver. Having competed from a young age in karting and winning numerous championships, he was of an age to move on and up. He took to the FG1000 series with the consummate ease of a natural champion. With a maturity shown beyond his young years he not only made the championship a nail biting affair for his poor Dad Mike Bale but the whole team too. On the last day, not only did he need to win both races, he needed to qualify in pole and score extra points for the fastest lap! No pressure then? Tom not only coped with the pressure to bring the car home in front of his nearest championship rival Saeed Bin Touq, his converted pole and fastest lap earned him the championship based on the number of wins in the season as they tied on points….Top job Tom! This season I have spent more and more time over at the kart track and watched the grids at this grass roots level racing thrive. The grids in the arrive and drive SWS Series have grown beyond expectation to the point where it is now commonplace for full and oversubscribed grid numbers…This along with some great grids in the pure race karts classes has brought the level of kart racing/racers up another notch. With a number of international drivers and teams getting involved in the local championships as well as the arrive and drive endurance series, this looks like the winning formula that could see a steady progression of drivers moving through the ranks and into other classes of racing in the future but, only time will tell.

So, for all the new champions out there after this turbulent season of racing, Circuit Pro Digital would like to wish you continued success for the new season. For those that narrowly missed out, re-focus and come out fighting harder and this could be your season!

And to all those who make this happen, the marshals, medics, crews and staff of the circuits, enjoy your summer and, I am sure that I say this on behalf of all the competitors, your efforts are much appreciated and your dedication allows us all to enjoy what we have….. The dedicated people who make it all happen

Thank you to you all…