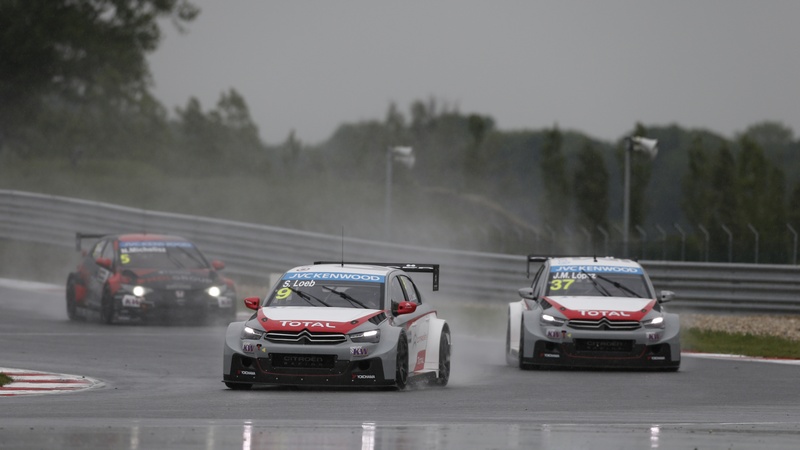 Sun, May 11th Slovakia-The WTCC community lived a historic moment at the Slovakia Ring, as it witnessed the cancellation of Race 2 due to the extremely bad weather conditions.

Heavy rain fell all Sunday on the Slovak track, soaking everything and making it impossible to race in late afternoon. This is the first time in ten years and after 211 races since the championship was revived in 2005 that a WTCC race has been cancelled. The bad weather did not discouraged the Slovak fans, and official attendance was of 29,900 over the weekend.

Race 1 also was impacted by the adverse weather conditions and was red-flagged before its natural end, although 75% of the distance had been covered and full points were thus awarded.

The race was basically decided at the start, where Sébastien Loeb managed to pass team mate José María López, who started from the pole. The two men ensured another 1-2 for Citroën, with Norbert Michelisz (Honda) taking third and visiting the podium for the first time this year.

The three Chevrolets RML cars of Coronel, Chilton and Morbidelli completed the top 6, while Petr Fulín brought home victory in TC2 at the wheel of one of the Campos Racing SEAT León cars.

With Yvan Muller slowed by a drive-through for jumping the start and finishing only 10th, ‘Pechito’ López has now increased his lead in the championship to 25 points over Loeb, now second.

Local hero Mat’o Homola retained his Race 2 victory but was stripped of that in the first race after a penalty for a grid infringement that promoted Milhail Grachev to winner.

Both races were quite lively and Homola excited the Slovak fans with two dominant victories. He benefited from a clash between Campos Racing team-mates Nikolay Karamyshev and Igor Skuz to win the first race; later he encored after a tough and fair fight with Grachev. Karamyshev is still leading the standings by two points ahead of Skuz.

In the TC2 class, Kiss’ Alfa Romeo led the first race from lights to flag and finished second overall behind Homola. He was imitated by Fulín in the second race. The Czech has already built solid leading gaps ahead of Peter Rikli (17 points) and Kiss (18).

Pfister had no rivals in the Single-Make Trophy, leaving Dmitri Bragin and Sergey Ryabov to fight for second place. Aku Pellinen retained the point lead in a classification that sees six drivers covered by ten points.

Krafft repeated the perfect weekend she had in France three weeks ago, but this time she had to win two very close battles with Gilles Bruckner. Krafft has already built a margin of 18 points in the standings and claimed a solid stake on the Ladies’ Trophy.