Full on with the Ferret: Biggle’s reinvents himself – The FG1000 Masters Class awaits!

Posted by CircuitProDigital | May 8, 2014 | Breaking News, Full On with the Ferret | 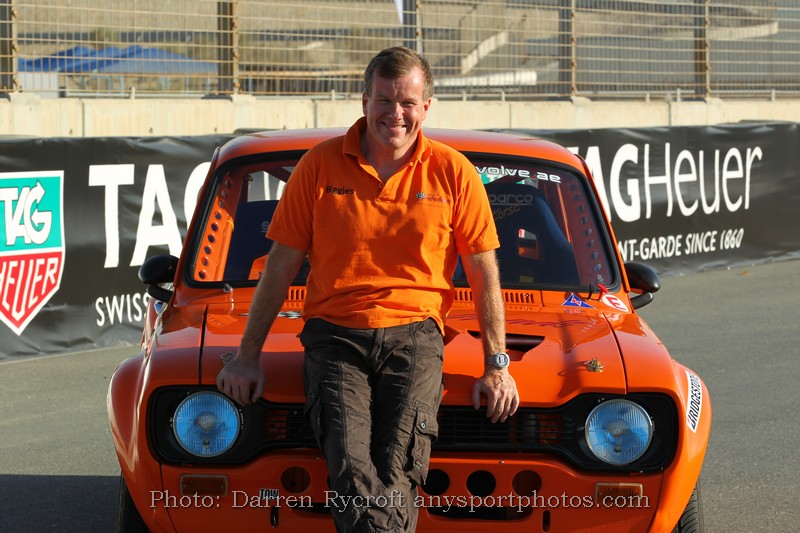 Neil with the love of his life, Svetlana his Mk 1 Escort

In a move more likely to confuse the paddock rather than sending shock waves of fear through the grids of Formula Gulf FG1000, Neil Greer (aka Biggles) has signed up to race in the FG1000 Masters series for the 2014/15 season.

Whilst Biggles has rarely been described as a master of anything, he does have extensive experience watching others who were more successful during his previous attempts at Motorsport. His racing exploits started in the Mid-Eighties, (read early Eighties) racing Production Streetbikes for several years in Scotland and England where he set the grids alight with his budget approach to racing and dynamic braking techniques. Unfortunately, to no one’s surprise, sometimes his ambition did not match the machines performance! Hustling the big Kwak GPZ 900 many moons ago...

So, after a hiatus of a couple of decades, Neil changed from two to four wheels and competed in the Golf GTi Cup in Dubai, where his coffee making skills and laisse faire attitude were much appreciated in the pit lane, if not widely represented on the podium. His one fastest lap of the series, was achieved while under the influence of some strong Flu medicine, but after an extensive Stewards investigation, was allowed to stand. A second investigation into Steward Intimidation was dropped due to lack of evidence! (although a bribery case may yet follow)…… Biggles main outlet for his love of Motorsports in Dubai has been the Gulf Petrolheads Forum, which he runs with the help of several other ‘has-beens’ And, over the last couple of years Biggles has been focusing most of his attention on his MK1 Ford Escort race car build, which has featured some notably unreliable attempts at completing a track day in either one piece, or still driveable. That along with his ‘born again’ biker adventures on board a variety of motorcycles that have found him lurking around the track in leathers once again, security have been informed of this and the situation will be monitored… So, to the next racecar adventure…

The budget for Biggles entry into FG1000 has been achieved by the introduction of a specially structured Sukuk with guaranteed returns likely to match his on track performance. When asked of his ambitions for his drive in FG1000, Biggles was heard to mumble something about Pit Girls and the Gulf Sport corporate lunches. Clearly the man has his mind on the job in hand….The racing will obviously come a close second! FG1000 series coordinator Barry Hope commented that “Neil brings to the field several decades of solid motorsports experience that should see him filling up the back of the grid nicely”. Race Workshop Manager and engineer Gary Francis is excited as well, stating “Biggles has a long history of mechanical aptitude, which should generate a rich stream of previously un-mined technical data as well as extra work for the workshop”. Currently they have no ‘real time’ data to work with for Neil’s open wheel adventure but word has it they have been out and bought a new timing system for the new ‘Masters’ class….Based on a ‘sun dial’ !!! A recent foray in an open wheeled race car re-lit Neils burning childhood ambition, that of a wannabe F1 driver....

Eponymous trackside photographer Darren Rycroft, when informed about Biggle’s entry in the series commented that he has been dying to get some really good slow motion shots of the normally missile like FG1000 cars, “this is the opportunity I have been waiting for, I have even dusted off the old ‘Box Brownie’ in readiness”.

So, if you want to follow the progress of ‘Yer Maun’ then I suggest you keep an eye on the local sports pages, failing that, http://www.circuitprodigital.com/ and http://www.dubaipetrolheads.com/ will be following his on track antics closely and updating everyone accordingly, we wish him all the best and look forward to the ‘Champagne after party’ invitations !