Dubai: Batelco Racing fend off big challenge to claim victory at the Kartdrome 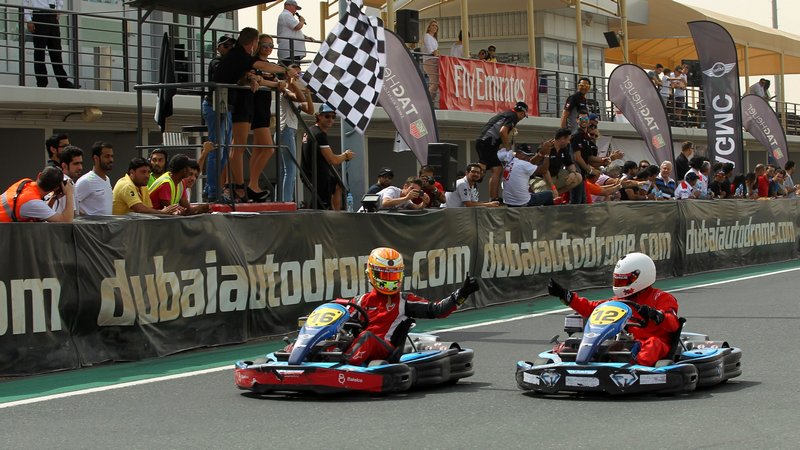 3rd May 2014-Batelco Racing took the chequered flag, after one of the most thrilling endurance karting contests in recent memory, to claim their second win out of two in the 2014 Kartdrome Endurance Championship driven by Mini on Saturday, 3 May 2014 in Dubai.

Dubai Kartdrome has in the past hosted some epic close races, but few will have been as close as the Kartdrome Endurance Championship 600 Laps which took place on Friday and Saturday at the UAE’s favourite karting venue. Batelco Racing overcame a massive challenge from CG Racing Pro, Dubai-5, Dubai Falcon Racing Team and Team Emirates to notch up yet another famous victory in Dubai.

Batelco signalled their intent early on by topping the timing sheets at the end of free practice on Friday evening, but Dubai-5 showed their hand by claiming pole position with a best qualifying lap time of 1 minute 13.762 seconds on the tricky Kartdrome Reverse Switchback configuration.

Dubai 5 set set the early pace, but when it mattered the experienced Batelco squad were simply too good, making the right strategy calls without fail while their drivers Mohammed Mattar, Alban Varutti and Ramez Azzam were relentlessly consistent and disciplined, while sustaining a fast pace throughout the race.

Batelco Racing team manager Osama Al Saad aid, “It’s a great feeling. We thought almost half way through the race we were going to lose this race, but thanks to the guys and the strategy we stuck to allowed us to achieve the podium and first position. It was a great race, both from CG Racing and Dubai 5. They gave us a hard time and we gave them a hard time, but in the end there is only one winner, and that’s only Batelco.”

Victory in the first two races justifies their decision to return to the series after a season lay off in 2013 as Al Saad explained, “We took one year off. We tried to focus on Europe, but Dubai Kartdrome is a favorite destination for us to come and race. We won this race not only because we wanted to win, but we also wanted to race in the memory of Christophe Hissette – his victory is dedicated to him.”

The top five teams, who were also among the top five during round one in February, slugged it out in tough conditions for 12 hours and 41 minutes, and at the end of a tense but intriguing race a mere two minutes separated the quintet as they crossed the finish line.

The all Emirati Dubai-5 outfit did enough to claim top spot in the prestigious Nations Cup ahead of CG Racing 1 and teammates Dubai-5-2.

“It was a good race but we were lucky at the end. The race was good and thanks for Dubai Autodrome for hosting this race and sponsoring young UAE drivers who participate in this competition. I hope we find more teams racing every year,” said Ali Al Mansoori the Dubai-5 driver captain.

Fifth place overall was good enough for Team Emirates to claim the coveted top prize in the Corporate Category ahead of second placed CG Racing 1 and Lukoil Racing Team in third.

Team Emirates team manager Redza Jamil said, “It’s unbelievable that we survived two penalties and yet still won first place in the Corporate Category. We were pushing for third overall as well, but unfortunately we were not close enough. However, we were pretty happy to finish P1 and our second team finishing P4. It’s a good overall result, we collected some good points for the championship, and we’re looking forward to the third round.”

Two victories in the first two of four races in the 2014 Kartdrome Endurance Championship driven by Mini give Batelco Racing an edge in the championship battle. However the summer lay-off will give their rivals time to regroup and mount a challenge when the series resumes in October.

Kartdrome manager Ryan Trutch summed up, “It was tantalisingly close Dubai Kartdrome Endurance Championship 600 Laps driven by Mini. We witnessed one of the closest fought races by five teams whom have all been in the running for the top step over the course of the race. But penalties plagued several teams which finally gave Batelco Racing an edge in the last hours, and the rights to the top step of the podium. They drove impeccably, as always, and take the well deserved win. Well done to all teams who participated – all winners in the end – and thank you to Mini for their support!”