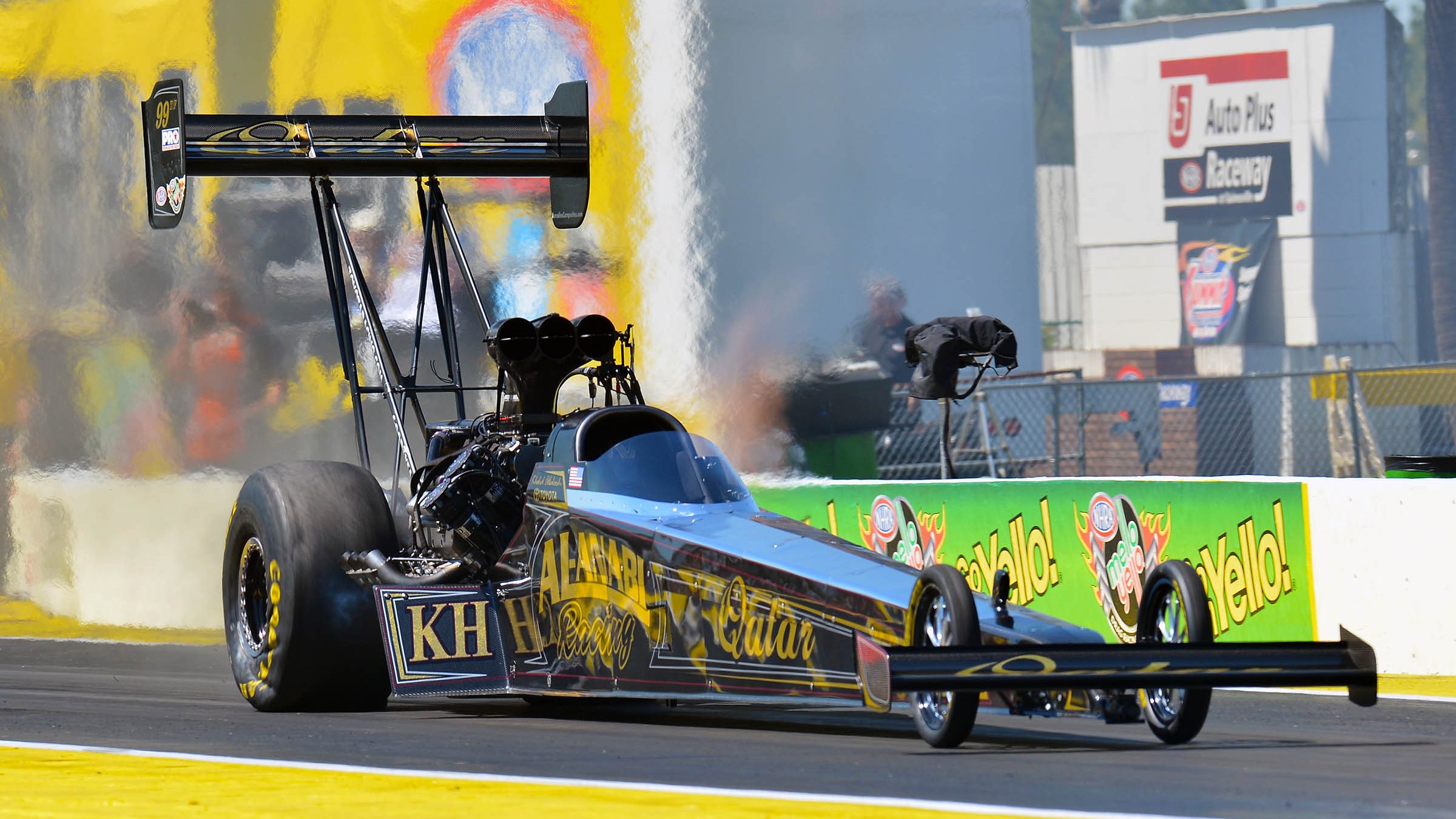 March 26, 2014- LAS VEGAS – The 2014 season could not have started any better for Khalid alBalooshi, the third-year Top Fuel driver for the Qatar Al-Anabi Racing Top Fuel Team, the three-time and defending World Championship team owned by His Excellency Sheikh Khalid bin Hamad Al Thani, but since this season-opening victory, things have been a bit tougher for the Dubai driver. AlBalooshi and his teammate, Shawn Langdon, resume racing in Las Vegas at this weekend’s 15th annual SummitRacing.com NHRA Nationals, the fourth of 24 races making up the United States’ 2014 NHRA Mello Yello Drag Racing Series. Qualifying is set for Friday and Saturday with eliminations scheduled for Sunday.

AlBalooshi’s season started with a brilliant performance at the opening race when he won the NHRA Winternationals and left the California race with the points lead for the first time in his Top Fuel career. From there, though, alBalooshi advanced to the quarterfinals in Phoenix, Arizona, and then two weeks ago in Florida, the Al-Anabi team suffered a rare, double first-round loss as both alBalooshi and Langdon were eliminated in the first round. Since Pomona, alBalooshi has dropped to fourth place in the NHRA Mello Yello Top Fuel point standings, yet he retains an extremely positive outlook on the season.

“I feel good about the race this weekend in Las Vegas,” alBalooshi said. “The Al-Anabi team is strong; both cars are strong. I think we are going to Las Vegas to do something good this weekend. I know what has happened so far this year, but I am not worried about our team. I know we are one of the best teams. We have a chance to win any race; on any weekend one of our cars can win the race.

“I feel this way because of what I have been seeing in the races. When the Al-Anabi cars are running well, they have some of the best times. Both cars have been good this year – sometimes better than everybody else, sometimes very close to the top people in the show. So when I drive to Las Vegas, I will feel very excited to race this weekend. I cannot wait to get there and get back in my car. After what happened to our team last race (first-round loss in Gainesville, Fla.), I am ready to start the weekend and keep going.”

Langdon, currently sixth in the point standings, has been running very well in 2014 despite winning just two rounds in the season’s first three races. The reigning World Champion qualified second at the season-opening race in Pomona, Calif., but lost a very close drag race to alBalooshi (3.73 to 3.76 seconds with a .007 margin of victory) in the second round, and alBalooshi went on to win the race. In Phoenix, he was the No. 4 qualifier but lost to race winner Antron Brown in the second round when the engine on the Al-Anabi dragster dropped a cylinder. In Gainesville, Langdon claimed his first No. 1 qualifier of the season but lost in the first round. The silver Al-Anabi dragster continues to compete at a very high level despite some unfortunate racing luck, but this weekend’s race is set for Las Vegas – the perfect place to change one’s luck.

“I still have a lot of confidence in the Al-Anabi car and the Al-Anabi team; we have a car that can go out there and win a race,” Langdon said. “The results haven’t shown it yet this year, but we have a great car, and we are able to make good runs just about any time. With the weather conditions looking pretty good for this weekend in Las Vegas, I think we’ll be able to put down some good runs this weekend and then get a little bit of racing luck on Sunday and go some rounds.

“It’s tough in Top Fuel. We really haven’t done anything where we’ve made huge mistakes. For some reason on Sunday, the Al-Anabi car hasn’t cooperated like it did last year when we always seemed to make a lot of good runs on race day. We haven’t had that much success yet, but it’s still early in the year. We’re not hanging our heads about anything. We have some things we can improve with the car so we’re not discouraged by any means.”

Al-Anabi Racing operates out of multiple locations in both the United States and Qatar. In the United States, the Brownsburg, Ind.-based operation is a two-car NHRA Mello Yello Drag Racing Series team that is managed by Alan Johnson Racing. Sheikh Khalid’s initiative has created increased international awareness of the State of Qatar while highlighting the nation’s international sports outreach. Alan Johnson is a 15-time NHRA champion in various capacities including crew chief, team owner and team manager. For additional information on the Al-Anabi Racing Team, team manager Alan Johnson or drivers Khalid alBalooshi or Shawn Langdon, please visit www.alanabiracing.com.