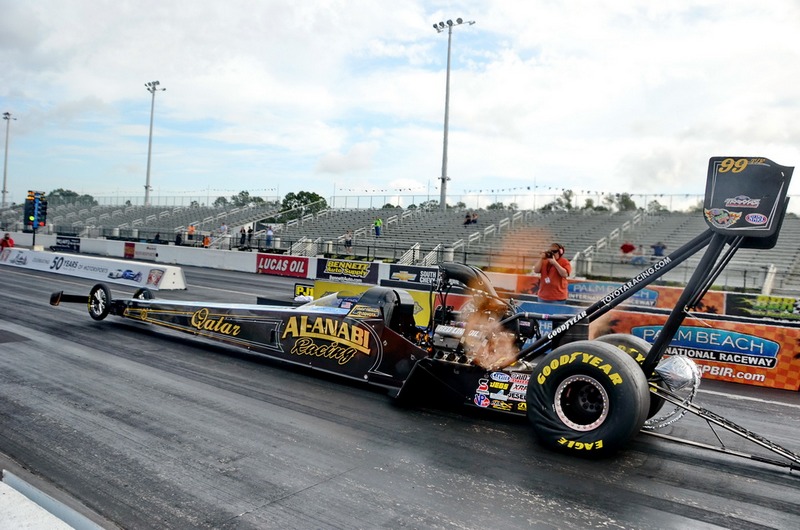 AlBalooshi, the No. 7 qualifier, faced a very difficult bracket. He raced seven-time NHRA World Champion Tony Schumacher in the first round and won. In the second round, he faced his teammate, 2013 NHRA Mello Yello Top Fuel World Champion Shawn Langdon and defeated his teammate by seven thousandths of a second. He beat Steve Torrence in the semifinals and faced top-seeded Doug Kalitta in the final round of eliminations. Kalitta enjoyed a flawless weekend with record-setting runs, but this day belonged to alBalooshi whose dazzling performance earned him the winner’s trophy in the season’s first race.

“I am so excited,” alBalooshi said. “There is nothing better than to leave the first race of the season with the first trophy. Thanks to Jason (crew chief Jason McCulloch) and everybody on our team; they have been working very hard, and I thank everyone for his hard work on our car; I thank Sheikh Khalid for giving me the opportunity to drive his car; I am happy we could make him proud today.” “The Al-Anabi car had a strong day today,” alBalooshi said. “It’s a good win, especially when you have Tony Schumacher first round, Shawn Langdon second round, and ‘Steve-O’ (Torrence), who’s been doing a good job. Doug’s (Kalitta) car was the best car all weekend, so it made it a very big day for us to take him down in the final and get the trophy.

Langdon was the No. 2 qualifier, and although the silver Al-Anabi team made a spectacular run in the second-round matchup with alBalooshi, the gold team made an even better run. With the second-round loss, Langdon is fifth in the NHRA Mello Yello Top Fuel point standings; he trails points leader alBalooshi by 48 points.

“Our second-round race with alBalooshi was just a really good drag race,: Langdon said. “We lost by seven thousandths of a second, and that’s how NHRA Mello Yello Drag Racing goes. You can win by seven thousandths, but you can lose by it as well. The Al-Anabi team made some excellent runs this weekend. They did an excellent job in qualifying. There are just a couple of little things we need to work on before we go to Phoenix (in two weeks). Congratulations to Khalid alBalooshi and the gold Al-Anabi team for winning the race today. Those guys did a great job – an Al-Anabi team won the race for Sheikh Khalid and the State of Qatar so that’s all that really matters.”

The Al-Anabi Racing team will be back in action Feb. 21-23, 2014 at the Carquest Auto Parts NHRA Nationals in Chandler, Arizona.