Dubai: Full on with the Ferret – KTM 1290 Superduke R – The Beast on the streets!

Posted by CircuitProDigital | Feb 4, 2014 | Breaking News, Full On with the Ferret, Reviews, test 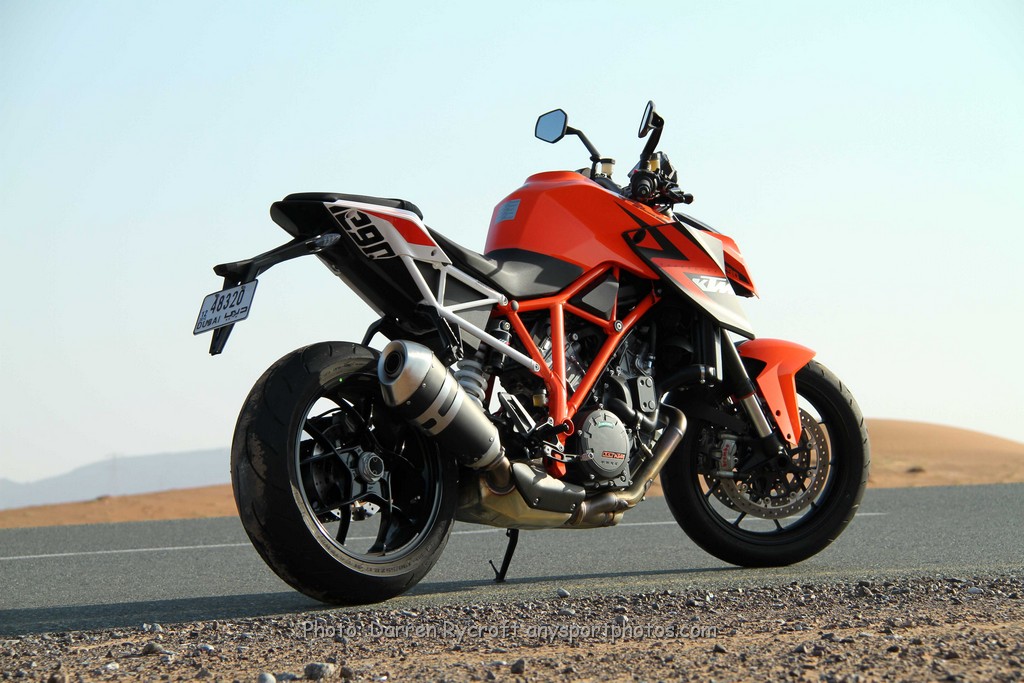 The KTM 'Beast' out in the wild

Unleashing the ‘Beast’ into the Middle East…..Part II

As agreed earlier with the guy’s over at KTM Middle east Al Shafar, I received confirmation that the new KTM 1290 Superduke R which had been launched at the Dubai Autodrome a week earlier would be available for the weekend. Would I like to take it for a full road test…Errr, is the pope religious?

So, after filling in the usual formality paperwork and collecting the keys, I returned home on the Thursday evening to get ready for an early start on the Friday morning. There was a small posse of riders waiting at the usual meeting point on Hatta Road to join us on the morning ride. The KTM was in good, mixed company for the ride with a Kawasaki ZX10, Honda Blackbird, a BMW 1000RR and a Triumph Speed Triple. The Triumph I had ridden before and was direct competition for the KTM and one which had a very strong reputation for being a great all-rounder. Always happy to don the leathers for a worthy cause....

Pulling away from the service station we would head over to the usual mountain roads via Kalba and back into Hatta for breakfast and then a similar route back again. Interestingly, for those who know that area will also know that there is a new section of road which is ideal for such road tests. It’s a very open, twisty road with new asphalt and is very inviting, an ideal road for testing both the high speed handling and the performance of the bike…With the huge amount of torque this engine delivers I wonder whether I will actually need to use the gearbox or just leave it in 6th gear! Good company for the KTM

As we pulled of the boring main Hatta Road and disappeared down the ‘rabbit hole’ then a whole new world was about to open up before us. Now the fun begins I thought as meandered our way through a few kilometers of two lane roads which cut a wavy path towards Kalba and the hugely popular mountain roads. As the speed increased, the smile got bigger. The carrot dangling in front of me was kilometer after kilometer of open, twisting black tarmac with ‘fun’ written all over it. I had purposely left the bike in ‘Street’ mode as I really wanted to see and feel the difference after riding in ‘sport’ mode up at the track the week previous. Well, the ride was certainly different, the ABS (anti-lock braking system) and TC traction control was on and this was easily confirmed when giving the ride by wire throttle an overzealous twist. As the front wheel left the ground, it is brought immediately back down to earth. No dramas, no sudden drop, just a very controlled power change through the on-board electronics. This allows you to keep the throttle pinned and the bike to continue in its quest to wrench your arms from their sockets. I tried this in the first three gears with the same result. I also tried it whilst cresting small humps in the road and the front end stays pretty much where it needs to be to keep you in control.

At one point in the middle of the mountain, the road had been washed away by the winter rain falls which had obviously been quite heavy. Faced with a small detour on a gravel section of road around where the tarmac used to be, I tried the anti-lock braking system on the rear. I dipped the clutch and hit the rear brake, a small judder and the bike pulled to a halt without any slides or fuss…This beast was actually very tame when needed. I tried it again at a slightly higher speed, same result….Impressive stuff! "End of the road boys"

Leaving behind the smaller roads we were now into ‘big boys’ territory and into the mountain roads. The speeds increased again as did the bend frequency. Left after right, long fast sweepers, slow tight sections both uphill and downhill were now testing the agility of the ‘Beast’…Everything in its stride, tipping it into the bends, trailing a brake, changing direction, hard acceleration, hard braking, nothing had her out of shape. This is a very confidence inspiring bike. The suspension was very plush even over the speed retarding lines painted in bright yellow across the road. Where some bikes would start to skip on the front as you cranked it over through these corners and across these lines, the KTM just soaked them up and got on with the business of keeping things in line and allowing you, the rider, to think about the next direction change.

Soon after a short re-fuel, we headed out to the new section of road mentioned earlier. This was notoriously fast and with long high speed sweeping bends which would now really test the high speed handling of the bike in ‘street’ mode. Rider input at higher speeds like these is important. Getting more weight over the front of the bike helped keep her stable as did smooth direction changes and weight shifting from side to side. With huge amounts of torque available, the gearbox wasn’t really required, applying the throttle was more than enough. That said, the gearbox was positive and slick and had a good spread, especially once you were out of first and second and hooking up the taller gears. Long fast winding sections of road, the perfect prey for this beast

As we all finally pulled into Hatta Fort Hotel for the usual breakfast feast, the talk was of which route to take next as the first half had been so much fun. OK, so we do it all again reverse direction. Fuelled up again we headed off, this time though, there would be a swap over. I would ride the Triumph for a section and Paul would ride the KTM. As mentioned before, the Triumph currently holds the ‘ace’ in this class of bike. Some will argue that fact in favour of the Aprilia Tuono V4R but whichever, and it is all personal preference; the KTM is now making a big claim on the class. We covered the same hunting ground as we had covered an hour or so ago, apart from the wind getting up a little, nothing had changed. Ripping up the tarmac between us again we pulled in before the mountain roads again, and, as much as it hurt him to say it, Paul was very impressed by the handling and power of the KTM and by the stopping power. Would it convince him to swap elegancies, I doubt it…..For now! Wherever the KTM was parked, it drew close inspection

Swapping back over again, we headed back into Dubai via the mountain roads. We would have covered 405km by the time we got back home for coffee and ginger biscuits! Later that day I would try some local rides, stop start stuff. Trips to the shops etc. With that I took a trip over to the Dubai Autodrome where a bike track day was being held. A chance to catch up and talk bikes with other likeminded individuals. Once again, the KTM was a crowd puller and plenty of complimentary comments headed her way. One guy who will remain nameless is already planning on calling the shop for a test ride and another, thinking of a new ‘track tool’ after hearing my report on how it went, he is seriously considering it as he looks to replace his current, tired track bike….

My final hours on the Saturday were spent running local again, calling at the Bikers Café on Beach Road for lunch before going on a short run ending at the KTM shop to return the bike. Even the stop start local riding was a pleasure, no wrist ache from being hunched over the bars, no leg ach from an extreme sports riding position. Yeah, I may be getting old and no longer want to be head down backside up but, with this bike, you don’t need to be. It has all the sporting ability wrapped in a comfortable shell…What more could you want. I had really enjoyed exploring the limits of the bike, I didn’t find them but I did have a lot of fun trying. The ‘beast’ as it has been nicknamed is a powerful machine with bags of torque but, it is all very usable when ridden with the traction control and various electronic aids engaged. Does this take away from the fun factor or the ride? Nope, not at all, what it does do is give you the confidence to push a little harder than you normally would, liberties that you wouldn’t normally take are more doable with this machine and, when/ if, you’re feeling brave or reckless or have the riding skills of a MotoGP rider, then switch it all off and let the beast show you its teeth. For me, I like to be warned before I am bitten, I’m happy to ride around with the electronic gizmos helping keep the beast at bay, that way I would hopefully avoid being bitten….

Finally, once again, I would like to thank Mark Chuck Montecillo at KTM Middle East Al Shafar for arranging everything for the test, much appreciated….