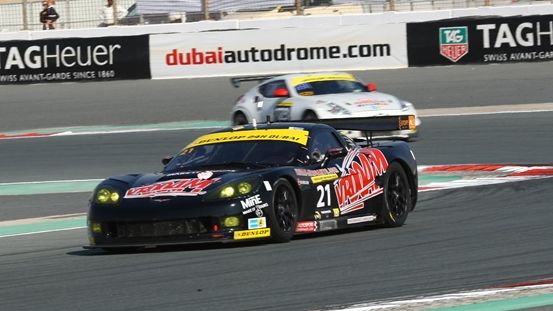 “I expected that we could do something in the low 1.58 range, but I didn’t expect my lap time to be that fast. Everything was perfect: the car handled well, I had no traffic and made no mistakes. I am really happy,” Pastorelli said. His car, an ex­Corvette works car, was already built in 2006 and already scored a major endurance race win: it was the very machine that won the Spa 24 Hours back in 2009.

The Dunlop 24H DUBAI starts tomorrow, Friday, January 10th, at 14.00 hrs local time (11.00 hrs CET). The action will be covered by Motors TV and Radio Show Limited, the team behind radiolemans.com. A live stream, live timing and results will also be available throughout the race at live.24hseries.com while regular updates will be provided on Twitter (@24HSERIES, #24HDUBAI) and Facebook (Facebook.com/24HSeries).