Full on with the Ferret: Living with a ’Streetfighter’

Posted by CircuitProDigital | Dec 30, 2013 | Breaking News, Full On with the Ferret, Reviews, test 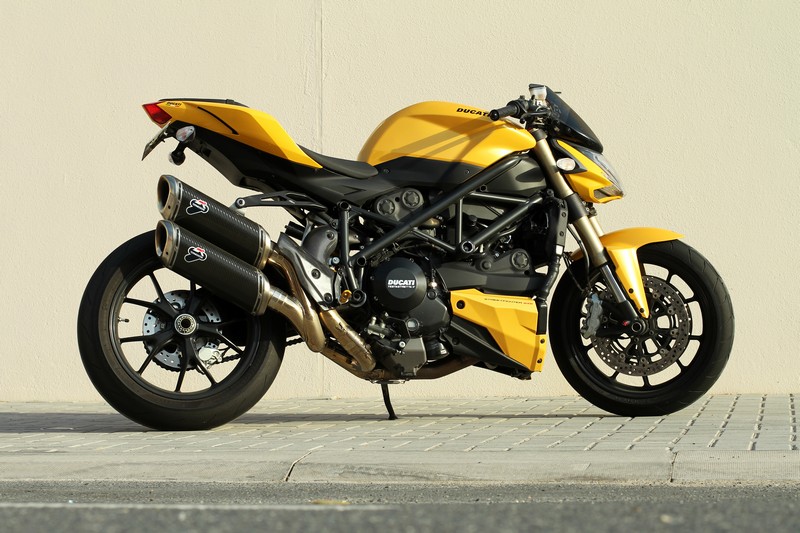 Neil Greer, the man behind the popular Gulf Petrolheads forum and owner of numerous and possibly too many to mention, motorcycles over the years is going through what some may call a ‘born again biker’ stage….When I say born again, this implies he has been out of the motorcycle mainstream for a few/many years. Whilst this may partially true, the old adage of ‘once a biker, always a biker’ is definitely true.

After many years in the wilderness the temptation was too much for Neil to bear. With the opening of the Ducati Store in Dubai the seed was sewn. As long time sponsor of the earlier mentioned Gulf Petrolheads forum, Neil had to pop over from time to time to their showroom down at Motor City. To cut a long story short, he was a kid in a sweet shop, temptation was too much and soon was the proud owner of a new Ducati Monster 696 in, of course, bright red……

This bike served its purpose well and with a few tasty modifications it was Neil’s gateway back to his youth. The early years spent hooning around the streets, lanes and tracks of Scotland and Ireland were returning again with the same red mist! Having ridden the bike on more than one occasion and being a Ducati fan I knew that [the Monster]eventually this would merely be a stepping stone…..I was right!

I wasn’t too surprised to hear that an upgrade was on the horizon. After hearing about all the positive & great points of running and owning the smallest Monster offering Ducati had, the familiar sounds were being uttered, lack of this, lack of that, lack of the other!

The Streetfighter was born…. Plenty of punch in this Streetfighter...

Talk about stepping up to the big league. I heard the distinctive twin cylinder engine note outside my villa; ‘our’ new bike had arrived. Greeted by a huge smile from the Irishman, I was introduced to a bright yellow Ducati 848 Streetfighter. In a lot of ways this was a similar to the earlier Monster in as much as it was NOT an out an out sports machine, un-faired like the Monster range bar the tiny bikini screen but, with more than enough ponies and handling capabilities to duke it out (pun intended) with said sports bikes….

So, after a hiatus away from the circuits and having dabbled on the little Monster, the Streetfighter found itself at the Dubai Autodrome on one of the weekend track days. I agreed to turn up and grab a few images of the new machine turning in a few laps.

The limitations of the bike in regards to track use were few but fundamental. Ground clearance was the main issue with the ground away foot pegs, brake & gear levers evident for all to see. Later this would be partially addressed by the fitting of some aftermarket jobbies allowing a little more ‘lean angle’

The bikes performance against some of the bigger engined and more powerful machines was not as noticeable. Breathing through a new set of very sexy looking Termignoni carbon cans, the deep sounding and distinctive Ducati note was reverberating around the circuit sounding better than any Jap screamers (two strokers not included)…

On pretty much the majority of the circuit layouts at the Autodrome, this bike can more than hold its own, and in most cases show a clean pair of heels to the rest of the group’s bikes. It does help if you have an ex-racer as a jockey too who is still able to hustle the bike and use its capabilities as they were intended…. Neil put's the 'fighter' through its paces at the Dubai Autodrome

So, track use aside, how is the bike to ride on a regular day to day basis. I was about to find out as I was offered Streetfighter for a regular Friday romp over to Hatta via Fujeirah and the very nice twisty mountain roads which flow between them. Once off the very boring and straight roads out of Dubai and onto the more interesting stuff, the ride suddenly became much more enjoyable. With the lack of a fairing and meaningful screen, the buffeting you get at higher speeds was uncomfortable and wearing after some time but, then again, I would never buy such a bike to go touring on!

The mountain roads were much more inviting and a relief on the head and neck after the bore of the long straight sections. As the speeds increased, the buffeting became less of an issue as you climbed from side to side and tucked up in more of a racing position on the bike. Effortlessly changing direction through the snake like roads due to the fully adjustable suspension which gave plenty of feedback from the road surface. Though, a little more firm than standard as Neil had tweaked the suspension for the track rides where the stock settings were a little on the soft side. If you were to ride the roads more and track less, I would suggest leaving the settings as they were for the added comfort. I would also recommend leaving the mirrors on the bike for safety reasons which would eliminate the need for the constant checks over the shoulders. Neil had removed them for the track and they had not been fitted back on before I took the run out.

With bags of torque from the 848 twin pot engine, 6 gear roll-ons were no issue, from below 100 kph you could crank the throttle open and the engine would deliver you more than enough power to have you double checking the speed all too soon. On the down changes through the gearbox, the bark from the exhaust was followed by a ‘racer like’ popping back through the carbon Termi’s which was very sweet sounding indeed.

The gearbox was an area that did give me a couple of issues. On two or three occasions I did miss a gear change both up and down through the gears. The fact is you need to be very positive with the shift lever otherwise a ‘false neutral’ can be found all too easily. That said, I am sure if this was your daily driver, you would soon get used to it and it would not be an issue.

The ride overall was comfortable, like I said, I wouldn’t choose such a bike to tour for thousands of kilometers on but as an everyday ride for knocking about town, the streets and the occasional lap of your favorite track, it is a great all-rounder and capable of delivering plenty of smiles. Bang for buck, the Streetfighter is a winner. Much less pain on the wallet for the initial purchase, service requirements will be less time consuming due to the lack of a full fairing to remove and therefore reducing the labour costs, leaving you a few extra pounds in the bank to save towards the new tires which this bike will tempt you into shredding all too quickly!