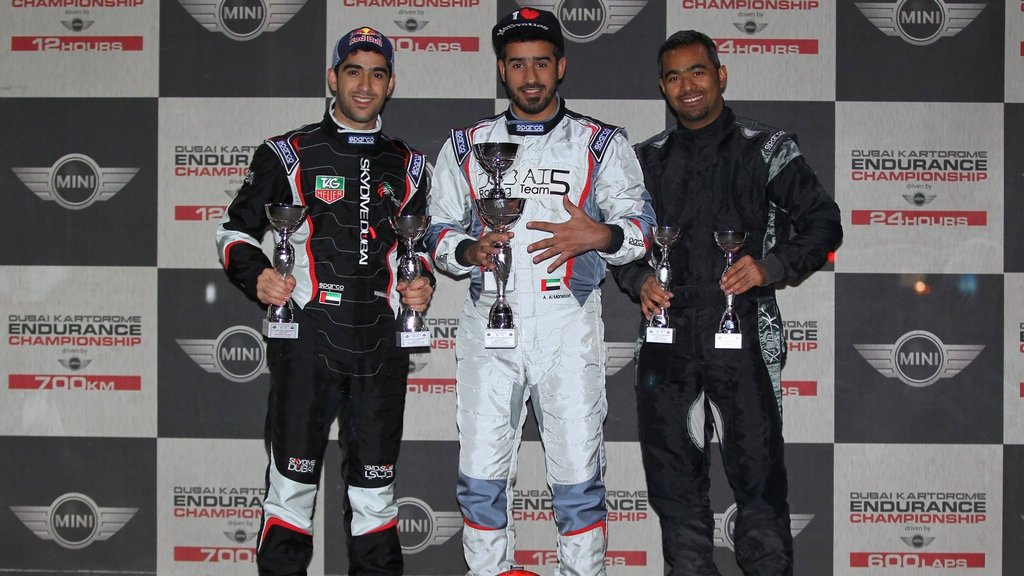 23 December 2013– It was a cold night at the Dubai Autodrome, on Sunday 22 December, but the on track action was scorching hot, as yet another huge field of top drivers descended on the UAE’s most popular karting venue for SWS Sprint junior and senior races.

It was also a night where Atef Al Barwani clinched the UAE SWS RX7 Championship which ensures he will take part in the SWS World Finals in France next year. He will be accompanied by a selection of this year’s top drivers from the UAE series.

Ali Al Mansoori, flying the flag for Dubai5 Racing Team, signalled his intent in qualifying, powering around the Kartdrome in a best time of 1:11.436, which was a half a second up better than his closest rival – on a track which was lacking grip thanks to the low ambient temperatures on the night.

Next up on the grid was Atef Al Barwani, the only other driver to dip into the 71 seconds zone, followed by the usual suspects in the top ten, such as: Hussain Abdul Ali, Saeed Al Falasi, Mohammed Al Mutawaa and Sam Zian to name a few. A mere two seconds separated the top twenty in the session.

A potent line-up of 33 drivers flagged off for the first race and immediately it was Al Mansoori who took the lead. He was clearly a man on a mission as he took victory by over five seconds, from Al Mutawaa in second ahead Al Barwani, Al Falasi, Hadi Al Bloushi and Sam Zian rounding out the top six. Bloushi impressing with his climb from 16th on th grid to fifth place at the end.

In Race 2 Al Mansoori again proved that he is in top form, but this time had to graft hard for his win as Al Mutawaa, flying the Sky Dive Dubai colours, and Al Barwani slugged it out and hounded the Dubai5 driver all the way to the finish line. But Al Mansoori kept his cool to make it two on the night, with Al Mutawaa second by a mere 0.090 of a second and Al Barwani third by a tad over a quarter second.

Behind them Zian held off Abdul Basit to claim fourth, with Al Bloushi claiming sixth place.

Race 3 was all change as a reverse grid was implemented for the top 15 drivers. It was fireworks from the get go, but at the end of it all Bahraini driver Abdulla Al Thawadi emerged the winner, his first in the SWS Series at the Kartdrome, was chased across the line by Al Falasi.

Behind the top two Al Mutawaa made it three podiums in one night after staving off the attentions of Rasul Akhmetshin, Umid Ali and Al Mansoori who made up the top half dozen in the final race of the night.

It was a great season for Al Barwani who commented after claiming top spot in the 2013 UAE SWS Championship, “Seems everything worked well as I planned. Happy to be the first Emirati driver to win the SWS Series three years ago, and now for the third time in a row is a great feeling.”

“I am told that history has been made, and that I am the most prolific driver in the UAE series. This is great news and I hope inspires other drivers. I am very happy,” added Barwani.

Earlier in the evening the under-14 SWS LR4 drivers set the tone for the evening’s action with two very close races.

Although the records show that Mansour Al Sarraj dominated the evening by qualifying in pole position and winning both races, the truth is he was made to work very hard for the honours.

In Race 1 Sam Garbutt gave Al Sarraj a hard time for the entire 12 laps, glued to his bumper until the very final staright – the pair crossing the line by a mere 0.156 of a second. Al Sarraj first and Garbutt second.

Behind them Omar Alami was third, with fourth going to Oscar McElroy, Khaleb Saab fifth and Samir Malas sixth.

Al Sarraj again set the pace in Race 2, but this time it was Malas – the youngest and smallest driver in the field – who gave chase. The duo swapped positions on just about every lap, with Malas leading for a large chunk of time until Al Sarraj made his move stick on the final lap to make it two out of two on the evening. The two wins ensured that Al Sarraj wrapped up the 2013 SWS LR4 Junior Championship and with it bagged the big prize of an official test day with the Energy UAE Kart Team – a reward for his impressive efforts during the course of the season.

Young Al Sarraj was a popular champion who set an good example to the younger drivers on the grid throughout the season, extending his help and friendship to newcomers. A true role model and a deserving winner.

Assistant Kartdrome manager David Bright summed up the night’s proceedings, “This is some of the best racing we have seen at this level, and each time out the driving gets better and the racing gets closer.”

“With sell out numbers like this, it just cements why this is becoming so successful and popular across the UAE. Thanks to drivers for the support, we appreciate it here at the Kartdrome. What a fantastic ending to the 2013 Dubai Kartdrome SWS Championship,” concluded Bright.