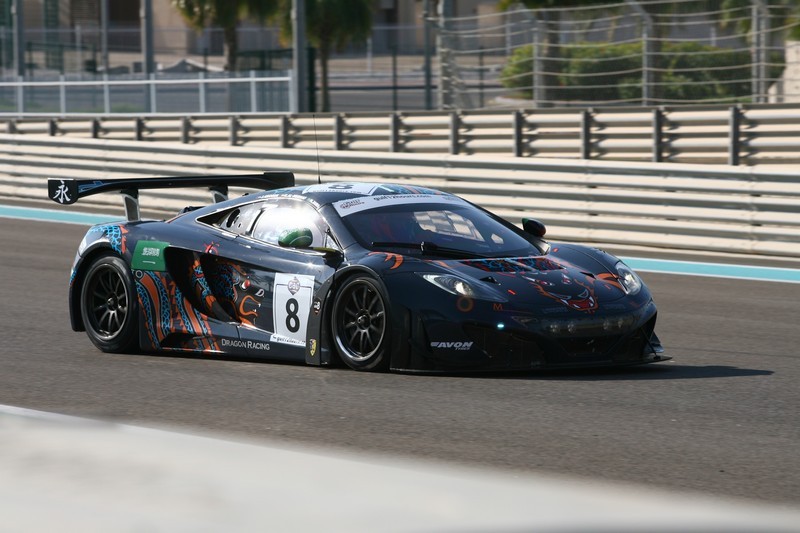 Abu Dhabi, UAE, Sat 14th Dec, 2013:- Kuwait’s most prominent racing driver, Khaled Al Mudhaf had a most challenging and testing time in the Gulf 12h Endurance race that saw several technical and mechanical challenges for the drivers and crew in the first few hours. Racing the McLaren 12c GT3 carbon chassis 3.8ltr V6 twin turbo was a first for Khaled and Mohammed. A technical masterpiece in its own right this high tech race car was introduced to the racing world only in 2012, it utilizes some of the latest technology derived from the McLaren F1 team.

The three Dragon Racing drivers each took a qualifying session of 20minutes in the grueling 35°c heat, but Khaled’s session was cut short after just 5 laps with a loss of power. “I was on a fast lap after scrubbing in new tyres, and while on the back straight on full throttle I lost all power, it felt like I had run out of fuel so I had to pull over and stop. I had to be towed back to the pits and later we found it was an electronic problem. I’m a little frustrated as I didn’t get a chance to get a good fast lap time in to help our team average in the final qualifying, it was close against the clock to get the repair done but I’m glad it was ready in time for Mohammed Jawa to get out and set some laps too. Our grid position is determined by the average of all three drivers best time, so we managed to qualify in 14th,” commented Khaled after qualifying.

Endurance racing is all about team work, and communication between drivers and the pit crew is crucial. Any small problem can become a crucial element in the overall performance of the entire team, each driver relaying on the others to keep the pace and look after the car. Tyre management is always challenging and with the mandatory Avon ZR5, the drivers found it a difficult option to manage.

“Tyres are so crucial in endurance racing and managing them in this extreme hot environment is not an easy task, but it’s the same for everyone. Just when I start to get comfortable in the car and get in some fast laps suddenly I have to go into tyre saving mode, its not flat out sprint racing style like I’m used to although we are trying to go fast we are at the same time trying to save and protect the tyres too by being gentle on the car. And then the tyres start to drop in grip level by the end of an hours racing and the car it gets a bit twitchy to drive,” commented Khaled during the first hour of the race.

Jordon Grogor took the start of the race at 9:30am and swapped over to Khaled after one hour. Khaled took over as car was running in 7th place overall. He completed 24 laps in the car during his first stint, and had some close battles with the top running GT3 cars trying to make some way up the grid.

“After an hour in the car, I was done, said Khaled. It is so tough I don’t mind admitting I was totally drained, the heat inside that car was torture by the end, it was about 65°c inside the cockpit and I think I must have lost 3 kilos in sweat. I was very comfortable with the car and I was setting good lap times, but after an hour at this pace, I couldn’t do more, I was glad to handover to Mohammed,” commented Khaled after his stint.

The car had a refuel and new tyres, ready for Mohammed Jawa to take his first stint in the car. Immediately as he joined the track and on his first outlap, disaster struck as the car lost all drive. Mohammed had to be towed back to the pit garage for inspection of the car. It was later found to be a drivetrain failure which could not be repaired in time for the remainder of that part of the race. The team then had the difficult decision to retire completely from the remainder of the race.

“Im obviously disappointed for the team, they tried so hard to fix the issue but sometimes these things cannot be solved and also I feel bad for Mohammed because he didn’t get to enjoy the race, yesterday I had an technical issue and today he had a technical problem, its just one of the things you have to accept in this sport, its no-ones fault, that’s racing as they say, but I want to mention a big thanks to the pit crew for stripping the car and battling for over 4hours to find a solution.” commented Khaled after the race.

The sister Dragon Racing Ferrari 458 GT3 also has a few surprises during its race and finally enjoyed taking the chequered flag in 10th place in GT3 class.

“We have to take the positives from the race and apply it to our next big challenge for Dubai 24hrs next month when we will all be racing the Dragon Racing Ferrari 458 GT3, a new car for me and a fresh challenge. I want to also congratulate the Team Abu Dhabi Black Falcon Racing team for their impressive win.