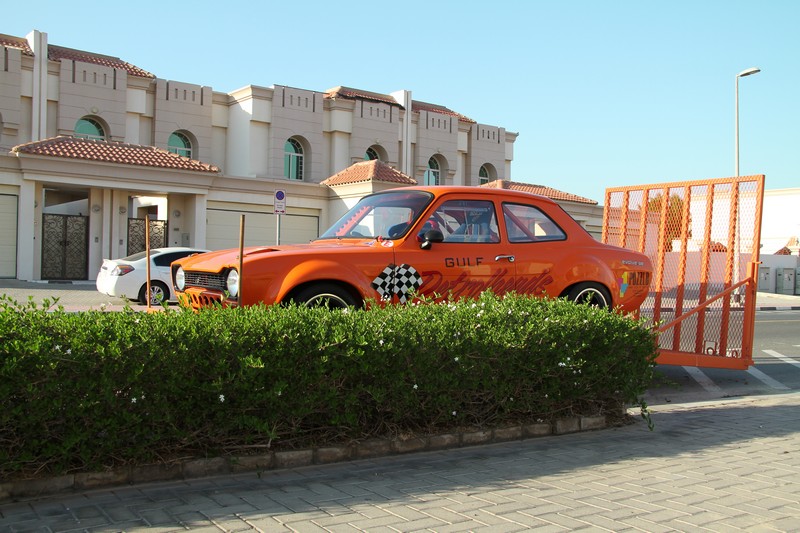 Neil Greer – aka ‘Biggles’ of the popular Gulf Petrolheads forum site (formed many years ago) is the proud owner of one of the most stunning Mk 1 Ford Escorts to be found not only here in the UAE, but possibly in the Middle East too.

What makes ‘Svetlana’ (Neil’s pet name for his beloved car) special is that he bought it as a stock road car, completely stripped it down to the bare shell and rebuilt it, pretty much on his own….As this was his first ‘project car build’ his labour of love would take many twists and turns as he slowly pieced together the car again and along the way, learnt many new skills, including welding and spray painting which he had never really done before and is now quite a dab hand. Loaded up and ready for track action

Quite a bit has been written about this car and its transformation from standard road trim to full race specification. The fact is, it is not yet the complete finished project and there is always something else that Neil is looking at changing or upgrading to further enhance the performance or looks of this beautiful looking car.

So, after many offers to get me behind the wheel of this classic car and share in the glory of Neil’s pride and joy, I managed to do just so at the Dubai Autodrome on its recent track evening. The floodlit club circuit would be our chosen track layout for our evening of fun. With almost perfect weather conditions, a nice clean track and a good turnout of race and road cars, we trotted off to have the usual pre event chat with the circuit Clerk of Course, the one and only Fraser Martin….Ably assisted by Michael Prophet and the lovely Richa, all of whom would be there to make sure we didn’t behave like Errr…Men behaving badly!!! Sign on complete, car ready to roll and Neil trundled off down pit lane for the first of his 20 minute sessions. In actual fact it was more of a testing exercise to see if the recently installed engine oil temp probe was reading and more importantly, what it was reading. The general consensus was that an oil cooler would be required to keep the oil at a reasonable temperature. When Neil returned, this was confirmed. Whilst not overly high, it was higher than deemed comfortable for prolonged track use. It would be okay for a one off session like this but not for repeat track sessions. Having a cooler already tucked away in the garage, it will soon be fitted to the car to reduce the temperatures to a more acceptable limit and reduce unnecessary engine wear.

After a couple of sessions it was finally time to pull on the suit and helmet and finally have a drive of the ‘Clockwork Orange’ With a few last minute instructions in my ears I hit the starter button and the four cylinder lump chimed into life through a very sweet sounding exhaust. Heading off onto the circuit for the first lap, it was clear that this was definitely a race car, a solid feel and noisy, sparse interior filled with the howl from the exhaust note…. Early sessions did highlight the fact an engine oil cooler is required...

After a couple of laps to get some heat into the tires, it was time to push on a little and see how Svetlana reacted to my driving as opposed to Neil’s. One thing instantly noticeable is that it does not take much of an effort to get the lady sideways, under throttle she will break away as you apply the power, it is controllable but you have to be ready to catch it on the steering to keep it heading forwards….

One thing which was noticeable was the steering which is fed by an electric pump is very sensitive and light to the point where there is little or no real feedback. The system has a rheostat to control the sensitivity but is currently not working, the option is to turn off the electric pump and use good old fashioned brute force. One other instantly noticeable thing was the pedal box setup. Based around the original pedals and modified to suit the cars other modifications, it is an area that Neil agrees needs further work, maybe an aftermarket race box would be beneficial in this case as this is not the most comfortable setup. It is drivable and, once used to it (as Neil clearly is) then you can drive around it but it would be so much easier and more comfortable to drive were everything in line where they need to be…

So, back to the track and after 7 or 8 laps there was a definite lack of forward motion and rising revs as I was exiting the turns and hitting the loud pedal. At first I thought it was the wheels spinning on the exit but alas, this wasn’t the reason. Now on the short run on the back straight and into the uphill link section, a distinct lack of drive and fried clutch aroma filled the car. I pulled off the racing line and coasted back into the pit trying to let her cool as much as possible as I did so. In hindsight, the previous lap had seen me miss a couple of gear changes which, at the time I though was me just missing the gate but on reflection, and more likely, it was another sign that the clutch was on its way out… Looking & sounding fantastic out on track

After a chat about it in the pit after the session, Neil did attempt to take her back out to see for himself if it was indeed the clutch. The omens were there, he pressed the start button and nothing happened. Now she refused to start, a gremlin had hopped into the electrics and immobilized the starter circuit. Three strong men and a push did see her bump into life again and trundle off down pit lane…Minutes later it was confirmed; the clutch had surrendered and was waving the white flag. The car limped sadly passed us and back into the pit area whereupon it was driven straight onto the trailer, its night out was finished long before it turned into a pumpkin…….. Svetlana looking sweet & innocent before the track sessions...Looks can be deceiving !

So, more work to be done on Svetlana before her next outing. Philosophical about it, Neil just said, “had it not happened when you were driving it, it would have happened whilst I was out in it at some point”

I would like to thank Neil Greer for his generous offer of sharing his beautiful Svetlana with me for the evening and hopefully I will get another invite at some point in the not too distant future to familiarise myself with her again and hopefully, she doesn’t reject me after the first session…