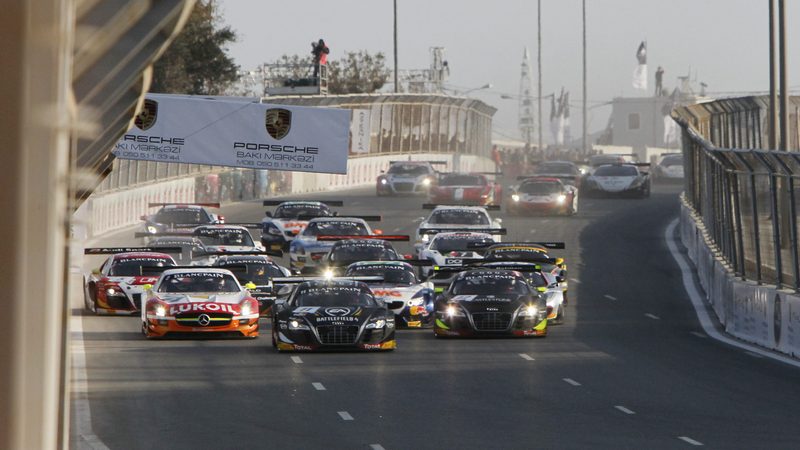 What is more, they took it in the best possible way, with a thrilling race victory at an adrenalin fuelled final FIA GT Series event of the year. Ortelli and Vanthoor’s title followed the Belgian Audi Club Team WRT’s clinching of the team crown in the qualifying race earlier today. If that were not enough for the Vincent Vosse-led team, they also collected a cool 100,000€ for winning the Baku World Challenge today.

The race started dramatically as Ortelli took the lead, avoiding mayhem behind him as multiple cars touched or ran through the first chicane. Despite losing the lead on lap two, when the Audi R8 LMS ultra lost time avoiding the #21 BMW Sports Trophy Team Brasil car of Ricardo Zonta (BRA) who was recovering from an incident, Ortelli ran solidly in third position.

Judging their pit stop perfectly, after a Safety Car period, Ortelli’s team mate Laurens Vanthoor hunted down the lead car of Alon Day (ISR), who was suffering with a mechanical problem. It was an easy move for the Belgian to take the lead, which he kept to the chequered flag.

The FIA GT Series Pro Cup runners-up for 2013 were Frank Stippler (DEU) and Edward Sandström (SWE), who could only finish 13th when their race was ultimately compromised by time lost after a lengthy pit stop.

For Stéphane Ortelli it was a fifth major GT title success in his career, ensuring he is in the record books as one of the most successful GT racers of the modern times.

Finishing in 2nd place on the road but later penalised at the Baku World Challenge was the Hexis Racing McLaren MP4-12C of Rob Bell (GBR) and Kévin Estre (FRA). It was an exceptional performance by the pair after Bell suffered a puncture after a contact with another car and pitted on lap one.

A well-judged and well drilled pit stop by the Hexis Racing crew allied to a safety car period, ensured that Estre was still in touch with the field. Some scintillating pace from the young Frenchman saw him scythe through the field, cementing his reputation as one of the bright new stars of sprint GT racing.

With just minutes of the race remaining he benefitted from an incident at the first hairpin between Alon Day’s Mercedes SLS AMG GT3 and Alvaro Parente’s (PRT) Sebastien Loeb Racing McLaren MP4-12C to sneak through.

Day and Buhk (DEU) recovered to finish in 3rd position on the road in their HTP Gravity Charouz Mercedes SLS AMG GT3, while Parente and Loeb (FRA) took the chequered flag just behind them in 4th. However after the race 10-second penalties were applied to both the Hexis Racing McLaren and the HTP Gravity Charouz for their part in the above incident. This promoted Loeb and Parente to 2nd place in the offfical result.

After the fraught early laps of the race the battle for the lead had been between the Boutsen Ginion McLaren MP4-12C of Frédéric Vervisch (BEL) which he shares with current up-and-coming single-seater star – Stoffel Vandoorne (BEL) and the Phoenix Racing Audi R8 LMS ultra of Markus Winkelhock (DEU). However, both the McLaren and the Audi were given drive-through penalties for track infringements and were therefore out of contention.

The other Boutsen Ginion McLaren of Alexander Sims (GBR) and Stef Dusseldorp (NDL) ran strongly early on but lost time and eventually finished in 8th position overall and 6th in the Pro Cup class.

A fierce battle with the fellow Lamborgini from the Rodrive team entertained the large Baku crowd but when the latter faded, it was Michael Ammermüller (DEU) who fended off several challenges from Pro category cars to take the Novadriver team’s 4th podium finish of the season.

Henry Hassid (FRA) and Anthony Beltoise (FRA) were satisfied with a podium position on their first visit to the FIA GT Series. Their TDS Racing BMW Z4 enjoyed a clean race to finish their Baku adventure strongly.

Taking a double win this weekend in the Gentlemen Trophy class were Federico Leo (ITA) and Claudio Sdanewitsch (DEU) in the AF Corse Ferrari 458 Italia. However, unlike the qualifying race they had to overcome some adversity when a pit stop infringement led to a drive through penalty.

Taking the final Pit Stop challenge award of the year was the crew of the #9 Sebastien Loeb Racing McLaren MP4-12C.

The grand finale of the 2013 FIA GT Series season saw stunning on-track excitement, a large crowd and new champions crowned on the spectacular streets of Baku, Azerbaijan. With the series becoming the Blancpain Sprint in 2014 and with an enticing prize fund package, there will be even more top class supercar action to look forward to the next season.

“First of all I think that I could have not done it without Laurens’ speed and talent, I think that at his age I was far from being so good, so I really want to say thank you to him. I would also like to congratulate Belgian Audi Club Team WRT. I am just speechless, it is so nice to win the championship with WRT and Audi, and especially a race win at the end, I still cannot believe that we won that race. I am very happy.”

“To be honest, during my stint I did not really know in which position I was. I saw that I had some fast cars in front of me so I thought that I might have been in a good position. Alon (Day) was on the way in to Turn 3, and then Alvaro (Parente) made a move on the inside, which I expected, so I went close to his bumper. Alvaro passed, and Alon was in the middle, I was on the inside next to his car but we touched a little bit. I was a bit concerned about the car because it was a huge hit but it was just in the middle (of the car).

“It really is a fantastic result for the team, especially after the incident at the start, so I am very happy.”

“For me, the weekend started quite badly, we did not practice a lot, we missed half of the second free practice and then I did a mistake during qualifying.

“After the Safety Car, which was very long, I could overtake the #9 Loeb car, and managed to get quite a big gap. After the pit stop, I hoped that the car would still be OK because we got some alarm in the car, but still Alon (Day) did great. It is a very good end of the season!”

“It was a big surprise that we finished in 5th place overall today, but I am really happy that the weekend is over. After the poor qualifying and the first race, we did not expect this result. This is a very good team job today; my team manager told me that I was 30-40 seconds ahead of the Novadriver, so I was relaxed for the last 4-5 laps. Overall, I really would like to thank everyone because it all worked well, which is for me the most important thing of the weekend.”

“Michael took the start of the qualifying race and he did great, as after the pit stop we were P11 while we started from 19th position. But unfortunately at the restart somebody pushed me into the wall.

The team did brilliantly to repair the car but in the main race, at the hairpin, a car spun in front of me so I lost positions but I kept the car safe on the track and we got a nice result again.”

“It was a very big challenge for us, because it was our first race in FIA GT Series, and for me it was the first race in the BMW so for sure the beginning of the weekend was difficult, as I had to learn the car and the track. We are very happy to get this result, be on the podium and in the top 10. So, it is very nice to be together again. The team did a very good job and we are very happy.”

“I did not expect to achieve a good result in Baku because it was my first street race. I tried to stay out of trouble at the start of this race, because it was a mess. I knew that I had about ten cars behind me. I tried to overtake but also to stay out of troubles and I managed to do that very well and was able to give the car to Federico (Leo) after the Safety Car period. Unfortunately I was blocked in the pit lane entry, behind a car that was stopped, and I was not able to go around it so I lost about 15 seconds because of that. It is a shame because we could have been in the top 10 again after Navarra in September but I am still very happy with the team effort this weekend.”