UAE: Seatter ‘Storms’ to victory as Bintouq leads the way on points. 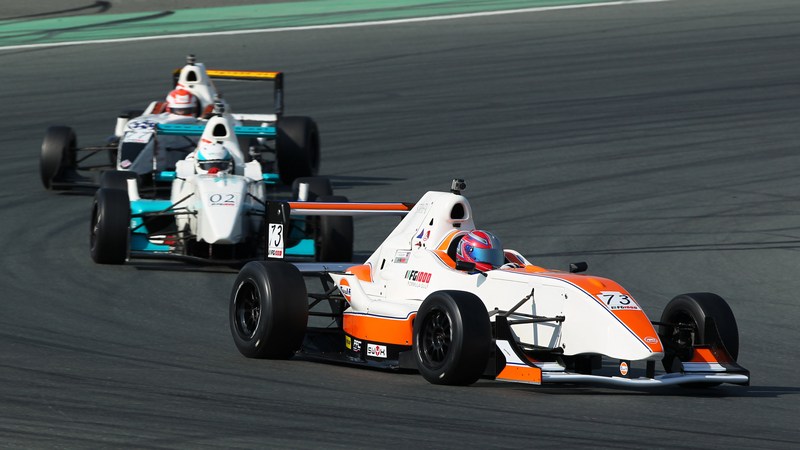 Seatter leads Bintouq into the bowl section of the Autodrome

Dubai Autodrome, Fri, 22nd Nov 2013 – Mother nature tried her hardest to scupper the first event of the 2012/13 Formula Gulf 1000 Championship, and with a very water logged circuit after storms through the night it didn’t look good! However the decision was made by the Dubai Autodrome management to switch the event to the less soggy Club Circuit and play got underway just after eleven in the morning.

With Ameer Hassan and Tom Bale missing the first event (Tom competing in Bahrain in the Rotax Max World Finals and Ameer trying to tie up the UAE Rotax Max Championship in Al Ain) the rest of the drivers were keen to take the advantage and gather some valuable points. Natasha Seatter had flown in for a guest drive and was surely a favourite, but was not to take any points away from the other drivers as she was competing on a Malaysian race licence.

So the drivers rolled out on a very green track for Qualifying. Slowly bringing their new slicks up to temperature, it was Seatter that was able to put some quick laps in and take the pole position. Yas Marina’s Saeed Bintouq followed up in second with KSA’s Abdullah Kabbani in third.

Race 1 started with Seatter taking the lead closely followed by Bintouq and Kabbani. Abdullah El Khereiji had made a good start and was in hot pursuit of the top 3. Meanwhile making his first ever car race start was Kuwait’s Adnan Bahrami. Kabbani and Bintouq traded places for the opening laps, but Bintouq used his experience to get his head down and pull away from Kabbani and chase the very fast starting Seatter.

Half way through the race Kabbani pulled into the pits with a mis-fire thus promoting KSA’s El Khereiji to third. Bintouq was now matching lap times with Seatter but was unable to make up the gap and Seatter stormed home to a solid victory. Khereiji drove a solid race to come home 3rd and Bahrami came in 4th while putting in consistently faster and faster lap times.

So, for race 2 it was again Seatter at the front with Kabbani at the back but looking to make up for his disappointment of the first race. Again, it was Seatter who made a great start but El Khereiji made a fast start too and moved up to second. Going into the link section El Khereiji out braked himself and Bintouq slipped through. Kabbani looked like he could take advantage but had to concede mid corner as he was rapidly running out of road. Going into lap 2 and still bunched up, El Khereiji clipped a kerb at turn 18 and spun, which allowed Kabbani into 3rd.

With Khereiji unable to restart his car a Code 60 Safety period was brought out, this allowed the DAMC marshals to get his car out of the position it lay stranded. At the restart it was Bintouq who led into turn one and with clear track ahead of him for the first time in the weekend he was no doubt pushing hard. However Seatter was able to squeeze past and head to her second victory of the day. Kabbani made up for his first race issues to take 3rd with Bahrami putting in another solid drive to take 4th.