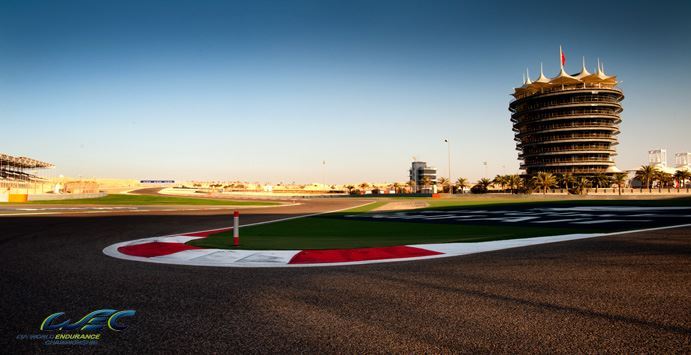 As the sun is about to set on the 2013 FIA World Endurance Championship, the eighth and final round – the 6 Hours of Bahrain – takes place at the Bahrain International Circuit between 28-30 November.  No less than seven championship titles will be decided at the very popular Sakhir circuit, and a race every bit as exciting as the penultimate round in China is guaranteed.

For Bahraini race fans, who have welcomed F1 Grands Prix to the Kingdom since 2004, the FIA WEC grid will contain a number of familiar names including newly crowned FIA World Endurance Champions McNish and Kristensen of Audi, Toyota’s Wurz, Davidson and Buemi, Ferrari’s Fisichella and Kobayashi, and Aston Martin’s Senna.   The depth of talent across all four classes within the WEC is not, however, confined to former F1 stars and there are multiple champions and sports car racing legends up and down the grid.

Following its strong performance in Shanghai, albeit with the disappointment of not claiming what looked to be a sure victory due to a puncture, Toyota Racing has once again entered two TS030 Hybrids and with a full complement of drivers for the high-temperature race.  The Japanese manufacturer is determined to claim the top step of the podium in Bahrain and Kazuki Nakajima returns to the cockpit of the No.7 to help his team mates Alex Wurz and Nicolas Lapierre towards that aim.  The line-up of Anthony Davidson, Sébastien Buemi and Stéphane Sarrazin in the No.8 Toyota will be equally determined to put the frustration of their Shanghai suspension issue behind them and race for the win.

Planning to spoil those plans will be a buoyant Audi Sport Team Joest which has little left to prove in 2013 having won six of the seven rounds to date and secured the LMP1 Manufacturers World Championship.  A third place finish in Shanghai for Loïc Duval, Allan McNish and Tom Kristensen in the No.2 Audi R18 e-tron quattro was enough to clinch a well-deserved Drivers’ Championship for the trio, but it is vital that all three complete the minimum driving time in the 6 Hours of Bahrain in order for the title to remain an equally shared one.  Looking for their third win of the season will be the No.1 Audi crew of André Lotterer, Benoît Tréluyer and Marcel Fässler.  There’s going to be little to choose between these four top entries as they race into the night on 30th November.

With the FIA Endurance Trophy for LMP1 Teams already settled in Rebellion Racing’s favour, Andrea Belicchi, Mathias Beche and Nicolas Prost will be not only racing to prove the No.12 Lola-Toyota’s 100% reliability record but also to gather vital data for 2014 when they will be competing with a new ORECA-designed Rebellion LMP1 prototype.

The superbly consistent OAK Racing currently holds the top two positions in the LMP2 Teams’ Trophy battle with 13 points separating the leading No.35 from the No.24, and a total of 20.5 points between the Sarthois team and the Argentinian-entered Pecom Racing in third place.  A resurgent G-Drive Racing, which has won three of the last four rounds in LMP2, is just two points behind Pecom and will be determined to move itself up the leader board with another strong performance in Bahrain.

A 15-point advantage remains with the line-up of Bertrand Baguette, Ricardo Gonzalez and Martin Plowman in the FIA Endurance Trophy for LMP2 drivers over their OAK Racing team mates Alex Brundle, David Heinemeier Hansson and Olivier Pla.  On 107 points (-22.5 to the leaders) are the No.26 G-Drive trio of Roman Rusinov, Mike Conway and John Martin.

The class of nine entries welcome some new faces to the FIA WEC for the 6 Hours of Bahrain, plus a ‘welcome back’ to Dubai-resident Fabien Giroix who joins Robbie Kerr and Craig Dolby in the No.25 Delta-ADR ORECA 03 Nissan.  One of the two newcomers is 19-year-old Austrian Lucas Auer who will be making his debut in sports prototypes in the No.31 Lotus Praga T128 alongside Kevin Weeda and Vitantonio Liuzzi.  The black and gold Lotus will line up with the No.32 entry of Thomas Holzer, Dominik Kraihamer and Jan Charouz which finished 7th in class in Shanghai.

With the electrical issues of Shanghai resolved, Pecom Racing’s Luis Perez Companc, Nicolas Minassian and Pierre Kaffer will be chasing their second victory to round out the season and to place them as high as possible in the final championship tables.  They will be battling against not only the OAK Racing and G-Drive entries, but the strongly-performing No.41 Greaves Motorsport Zytek-Nissan which features the second WEC newcomer, Alessandro Latif.  The 17-year-old Anglo-Italian – the youngest driver to compete in the FIA WEC – will be teamed with the very experienced Björn Wirdheim and Tom Kimber-Smith.

David Cheng, the Chinese driver who resides in the USA, remains with OAK Racing in the distinctive Art Car, the No.45 Morgan Nissan of Jacques Nicolet and Keiko Ihara, for the final round of the season.

LMGTE – all to play for across 5 Championships!

Aston Martin’s 1-2 in Shanghai allowed the British manufacturer to leap-frog Ferrari in the championship tables, and the gap between the two in the LMGTE Manufacturers World Cup is now 17 points.  In the FIA Endurance Trophy for LMGTE Pro Teams Aston Martin’s No.97 leads AF Corse Ferrari’s No.51 entry by 128.5 points to 120, with Porsche AG Team Manthey’s No.92 on 113 points.

The six manufacturer-led entries feature the same driver line-ups as seen in Shanghai, with the hard-charging Bruno Senna once again joining Pedro Lamy and Richie Stanaway in the No.99 Aston Martin Vantage V8.  In the World Endurance Cup for GT Drivers, Aston Martin Racing’s Stefan Mücke and Darren Turner lead Gianmaria Bruni and Giancarlo Fisichella of AF Corse by the narrow margin of just 5.5 points so there will be fierce competition between the marques in Bahrain.  Porsche’s Marc Lieb and Richard Lietz have 110 points and are mathematically still in with a shout at championship success.

AF Corse Ferrari’s No.71 drivers, Kamui Kobayashi and Toni Vilander, will no doubt be supporting their team mates fully, just as the No.99 Aston Martin drivers will back up the No.97.  Jörg Bergmeister and Patrick Pilet of the No.91 Porsche 911 RSR, which finished 3rd in class in China, will be aiming for maximum points for the German manufacturer.

The 8-strong LMGTE Am category will also doubtless be featuring tight battles on track, with championship successes at stake, and also features a revised driver line up in the No.61 AF Corse Ferrari.  François Perrodo and Emmanuel Collard (who this year have competed in the ELMS) join Ireland’s Matt Griffin for the 6 Hours of Bahrain, replacing Marco Cioci and Jack Gerber, the latter having family and business commitments for this round.

The victory for the No.81 8Star Motorsport Ferrari of Enzo Potolicchio, Rui Aguas and Davide Rigon in China promoted it to second in the FIA Endurance Trophy for LMGTE Am Teams, just 5 points behind the No.96 Aston Martin of Jamie Campbell-Walter and Stuart Hall who also hold onto their lead in the Drivers’ trophy chase.   A further 4 points back, thanks to its excellent second place in China, is the No.76 IMSA Performance Matmut Porsche of Jean-Karl Vernay, Raymond Narac and Markus Palttala.

For all the latest information on the 2013 FIA World Endurance Championship visit www.fiawec.com